U.S. Attorney General and Representative are far from ideological soulmates. But in a one-two punch, they’re about to take on the country’s biggest technology platforms and could drive the most significant changes to antitrust law enforcement in decades.

Barr, one of President ’s most loyal cabinet members, is poised to file a monopoly-abuse lawsuit as soon as this week against ’s Google. Cicilline, a Rhode Island Democrat, is preparing legislation based on last week’s report alleging wide-ranging antitrust violations by Google, , and

While the Justice Department case, which is expected 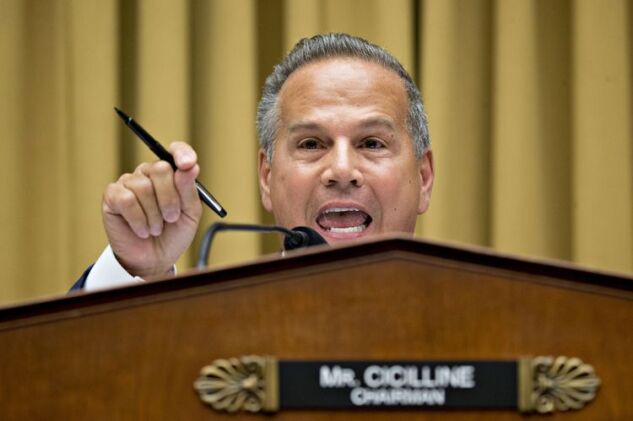 to focus on Google’s monopoly over internet search, could take years to resolve, Cicilline’s legislation could have immediate effect if passed -- and could be far more consequential for the tech industry as a whole.

This is true even if Cicilline’s most dramatic proposal -- to break up the companies -- stalls because of Republican opposition, antitrust experts said.

“Even if half of this, a fourth of this, makes it through the dog fight, it’s still a pretty huge deal,” said John Newman, who teaches antitrust law at the University of Miami School of Law. “Even a compromise here is revolutionary in some ways.”

Measures proposed by Cicilline could arm competition cops with new powers and weaken legal barriers that many say have tilted the playing field too much in favor of big companies.

A Cicilline bill could have its most profound effect on mergers and acquisitions. The House Democrat is expected to take aim at the heart of antitrust thinking for the last 40 years -- the so-called consumer-welfare standard that says short-term consumer price effects should be the focus of merger evaluations and monopoly investigations.

The report calls on Congress to clarify that antitrust laws are designed not just to protect consumers, but also “workers, entrepreneurs, independent businesses, open markets, a fair economy, and democratic ideals.”

The document also recommends several changes to merger statutes, such as by setting bright-line rules for when deals are disallowed. It would, for example, make acquisitions of tech startups generally illegal, a step that would go a long way toward loosening the power of the tech giants without breaking them up.

, a leading antitrust scholar at the University of Pennsylvania’s law school, said he favored the proposal’s call for restrictions on acquisitions of startups, which would allow smaller companies to grow and compete against the large platforms.

Amazon, Google, Facebook and Apple have made hundreds of acquisitions over the last decade, none of which were stopped by antitrust enforcers.

Cicilline is also expected to seek to revive laws banning companies from driving competitors out of business through below-cost, or predatory, pricing.

That could stop Amazon, for instance, from waging price wars against sellers of rival products, much the way it did to Diapers.com in 2009. The report says Amazon slashed diaper prices so much, it lost $200 million in a month. Amazon’s rock-bottom prices drove the smaller firm to sell itself to the online retail giant, which ultimately increased prices.

The report further recommends banning the tech titans from favoring their own products and discriminating against rivals on their platforms. That could stop Google, for example, from ranking its travel- and shopping-search products above third-party content.

Representative , a Colorado Republican, and others in his party endorsed making it easier for antitrust enforcers to stop future deals. While dismissing calls for breaking up the tech giants along business lines and non-discrimination mandates as “nonstarters,” they backed two measures aimed at boosting the ability of startups to compete against tech giants.

One is called interoperability, which would require dominant platforms to interconnect with other networks so that the same services are easily available across firms. The second, data portability, would require networks to make it easier for users to migrate their data between platforms.

Together, the changes could allow social-media startups to get a footing by ensuring that, say, Facebook users who want to move to an alternative network could easily take their lists of friends, photos and posts with them.

The recommendations by the House antitrust subcommittee, which Cicilline chairs, are a long way from becoming reality, given Republican control of the Senate and White House. Even if Democrats take both in November, Republicans may be able to force compromise with procedural tools that allow them to block legislation -- unless Democrats do away with the 60-vote majority needed to advance legislation, as some have advocated.

If Trump loses to former , many of the Cicilline report’s recommendations are likely to resonate with people who are informally advising the Biden campaign on tech policy, said a person familiar with the matter.

The central antitrust laws in the U.S. were passed more than a century ago and the last major antitrust statute became law in 1976. The last antitrust breakup of a company was nearly 40 years ago, when AT&T’s telephone monopoly was dismantled into regional phone companies.

Advocates of tougher antitrust enforcement believe the government for decades has been too permissive toward mergers. They also think the and the need more firepower to counter the increasing concentration and market power of companies across the economy, not just the tech sector. By overhauling the antitrust statutes, the advocates say, Congress can also override court cases that have tied enforcers’ hands.

“The overall result is an approach to antitrust that has significantly diverged from the laws that Congress enacted,” the report says. “In part due to this narrowing, some of the anticompetitive business practices that the subcommittee’s investigation uncovered could be difficult to challenge under current law.”

Some antitrust traditionalists disagree over the need for reforms. “It’s really about doing a massive, radical overhaul of the entire system, root and stem,” said , a former FTC member who teaches at George Mason University’s law school.

He criticized as dangerous the recommendations that would target business conduct that can benefit consumers. “This is an invitation for having bureaucratic agencies design the economy without much check for judicial review.”

Some favor a middle-of-the-road approach. In the AT&T case, the federal courts ordered its breakup only after more modest regulatory efforts failed. , a senior adviser at Public Knowledge, a think tank that generally favors more aggressive enforcement, thinks that should be the model for the tech giants.

Breaking up the platforms may not be needed if more modest interventions are tried first, such as preventing them from discriminating against other companies that use their platforms and requiring interoperability, Kimmelman said. Those are significant changes that can potentially deliver the same benefits as a breakup, he said.

“Some of the more severe remedies can be justified but they cause trade-offs that cause some consumer benefits being given up,” said Kimmelman. “You have to have a really strong track record to convince the public that they should make those trade-offs.”

Legislation to strengthen enforcement is also certain to instigate a fight with the tech companies, which wield some of the most influential lobbying operations in Washington.

Already, the U.S. Chamber of Commerce, the largest business trade group, is pushing back with a five-figure advertising campaign to defend existing antitrust laws.

At an Oct. 9 panel discussion about the report, Cicilline said the tech juggernauts “have enormous incentive to resist any change or allow any competition into this market because they are benefiting enormously” from their monopoly power.