Toward the end of every year, chicken producers compete for massive contracts with grocery stores and fast-food chains across America. At least, that’s how it’s supposed to work.

A string of text messages and emails disclosed in a federal indictment Wednesday suggest otherwise. In one 2014 exchange, , the now-chief executive officer of chicken giant , asked an unnamed colleague about negotiations with a restaurant franchise. He noted that a competitor “did cave” to offering a lower rate to lock in a previous contract. The manager responded to say, “They are listening to my direction.”

After years of talk, the feds have finally pounced: Big Chicken, they say, has been fixing prices. It’s one of the stranger examples of alleged market-rigging in a long history of cases -- and an unusual one in that the chief of a company this big is actually facing criminal charges and as many as 10 years in prison. The charges the U.S. Justice Department laid out Wednesday in its indictment appear to document executives at competing companies colluding to share pricing and bidding information from 2012 through 2017 in the cut-throat world of commodity chicken.

Penn was indicted by a grand jury in Colorado along with a former vice president of the company. There are also charges against executives from , a tiny player with about 1% market share.

Pilgrim’s, which is majority owned by Brazilian food giant JBS SA, said it is “committed to high ethical standards, governance, and free and open competition that benefits both customers and consumers.” The company will “continue to fully cooperate with the Department of Justice in their investigation,” it said in a statement late Wednesday. Penn didn’t respond to a message seeking comment sent to him via LinkedIn. 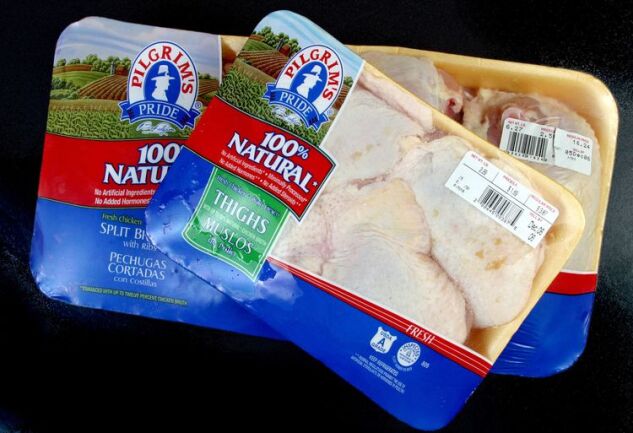 The Justice Department filing includes some colorful text-message exchanges, with Penn boasting to colleagues at Pilgrim’s about charging customers “A-Hole Premiums.” They also suggest that the poultry giant was in regular communication with rivals over prices. The are seven suppliers referenced in the indictment, though only Pilgrim’s and Claxton are named. That indicates more changes could come after a decade of hearings on antitrust and consolidation in the industry and a slew of civil lawsuits.

“It’s hard to get anything more solid than having text messages of people working together to rig prices,” said Christopher Leonard, author of “The Meat Racket,” which examines the protein industry. “This is the most significant action in federal government on the meat industry in probably decades.”

The case against Pilgrim’s is part of an ongoing investigation into allegations of price fixing by chicken processors that came to light . Tyson Foods Inc. and Sanderson Farms Inc. have also received grand jury subpoenas in the investigation, according to regulatory filings. In a statement, the Justice Department said the charges were the first filed in the open probe. Together, Pilgrim’s, Tyson and Sanderson control almost half of the U.S. chicken market.

A woman who answered at Claxton’s headquarters in Georgia after a transfer from a receptionist declined to comment without identifying herself and hung up.

Sanderson said it had no comment on the matter, noting that it wasn’t named or involved in the indictment. Tyson didn’t respond to emails and phone calls seeking comment.

The charges are the latest bombshell to hit the U.S. meat industry, which has been gripped by crisis after the coronavirus pandemic sparked plant closures. Thousands of the industry’s workers got sick, and dozens have died, with unions and labor advocates saying that the protein producers didn’t do enough to protect employees. Even the U.S. Centers for Disease Control concluded in a recent report that conditions at the plants increased the risk of the infection spreading. 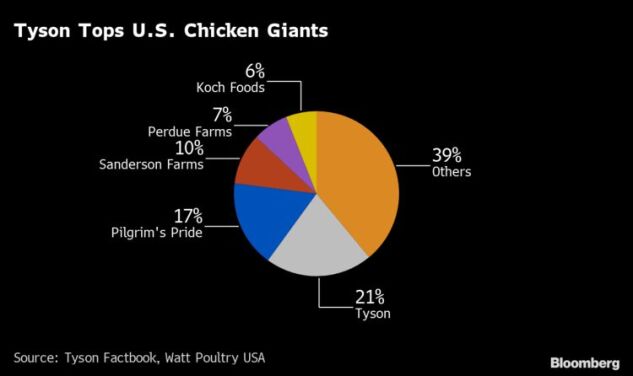 While Wednesday’s charges are unrelated to the current crisis, they could signal that enforcers will be vigilant about issues in the industry. The Justice Department is also probing potential market manipulation at beef processors, and the U.S. Department of Agriculture is separately investigating processor margins.

The four executives charged -- Penn; Roger Austin, a former vice president of Pilgrim’s; Mikell Fries, the president of Claxton Poultry; and Scott Brady, a Claxton vice president -- face a statutory maximum penalty of 10 years in prison and a $1 million fine.

In the 2014 text exchange between Penn and the unnamed colleague, the latter eventually clarifies that the reference to “they” was referring to a fellow Pilgrim’s employee who was negotiating the deal for the company, not a competitor.

The text exchanges cited in the indictment are full of industry terminology dealing in the weird complexities of chicken pricing. But the document also gives a public glimpse into the arcane market.

Restaurants and supermarkets receive bids and other pricing offers including discount levels directly from suppliers, or in the case of fast-food restaurants, through a centralized buying cooperative. Negotiations usually occur toward the end of the year and establish prices for the following 12 months.

Chicken pricing is often based on a cost model for eight-piece bone-in chicken products, know as the eight-piece COB. Dark meat is usually priced at a discount to that benchmark.

The messages between executives reveal that a difference of just pennies on a price can mean hundreds of thousands of dollars in additional profit because of the scale of volume.

Claxton’s Brady, a former Pilgrim’s employee, in a 2012 text message tells Fries that Pilgrim’s was selling eight pieces of chicken for 3 cents more than his company. His text to colleague Fries shows he found out about the price difference from Austin, the then-executive at Pilgrim’s.

Fries responded: “Tell him we are trying!”

U.S. chicken prices had just started picking up in 2012, after a drought affected supplies. The filing appears to deal mainly with the obscure market for small-sized chickens -- the juicy, sought-after variety that has recently ignited a war for chicken sandwich dominance in national restaurant chains.

The Justice Department is likely to bring additional charges in the investigation, said Lisa Phelan, a lawyer at Morrison Foerster LLP in Washington and a former prosecutor with the Justice Department. Pilgrim’s Pride is probably negotiating a plea agreement with the government, she said, and other companies in the industry could be targeted, which is typical in a price-fixing investigation.

“The DOJ always looks to hold both the companies and executives responsible for any kind of collusion in cartel conduct,” Phelan said.

While Tyson Foods, the biggest U.S. chicken producer, isn’t named, the news “casts a pall” over the company, said analysts at JPMorgan & Chase.

“If these allegations are true, they offer more evidence of an industry that has no problem exploiting workers and now possibly customers, for their gain,” said Minor Sinclair, Director of U.S. Domestic Programs at Oxfam America, an advocacy group that also holds shares in Pilgrim’s.

One tool prosecutors may be using to gather evidence is cooperation from a company. The Justice Department’s antitrust division has a leniency program that allows companies to win immunity from charges if they are the first to alert the government to price-fixing conduct and agree to cooperate and provide evidence of wrongdoing by their competitors.

A building public backlash against massive companies that dominate their business lines surfaced in the Democratic presidential primary, with several candidates joining “Big Agribusiness” to “Big Tech” and Wall Street as political bogeymen in appeals to win over traditionally Republican-leaning rural voters.

Food shortages during the coronavirus pandemic and market disruptions from outbreaks at meat plants have further focused attention on the risks in consolidation. Republican leaning hog farmers and cattle ranchers have seethed in particular at the disconnect between rising consumer prices for beef and pork and declining prices paid for their livestock. Even with the Trump administration’s anti-trust investigation into big meatpacking companies, a resolution may be months or years away. The charges against chicken processors demonstrate a commitment to enforcement of price-fixing laws.

Still, the revelations are unlikely to have a big effect on retail chicken prices, according to JPMorgan analysts. While the difference of pennies per bird can create big profits for producers, it’s unlikely to have a large impact on most grocery shoppers.

“Supply and demand remains the primary driver of prices,” the analysts said.