Gig economy workers fighting for higher pay and better working conditions through protests and grassroots organizing face yet another obstacle in their campaigns: U.S. antitrust law.

Federal statutes aimed at promoting competition and preventing monopolies leave out gig workers, classified as independent contractors, from protections for unionizing or other group actions.

Federal Trade Commission Chair Lina Khan is pushing to change that through legislation or joint guidance with the U.S. Justice Department, which would be a more straightforward if legally risky way of clarifying that current antitrust exemptions for traditional unions can extend to gig workers. The agencies plan to hold joint workshops in December covering the intersection of antitrust and labor.

The FTC’s push joins an ongoing tug-of-war in the U.S. among gig companies, lawmakers, regulators, academics, and legal advocates over the employment status of app-based workers for , , , and others. It also comes as thousands of workers protested working conditions in October by striking, one of the activities that antitrust laws seem to block for gig workers because it may be considered a collective effort to fix the price of labor.

Gig companies say their workers are independent contractors who lack job rights guaranteed to employees, such as minimum wage, overtime, and unionization. They have supported granting some employment benefits to contractors, and some states and cities have made similar legislative pushes, short of challenging the limits of the antitrust labor exemption.

Regulatory agencies could encourage courts to grant antitrust protections given to unions, which comprise only employees. But some attorneys say that would be a difficult path: courts don’t have to defer to that guidance, and such changes could create a loophole that enables independent contractors in other industries to fix prices for their labor.

“Writing an exemption that allows the gig economy workers to collude on prices would have a real danger of allowing price fixing across the whole economy,” said Bruce Hoffman, a partner at Cleary Gottlieb Steen & Hamilton LLP, who served as director of the FTC’s Bureau of Competition from 2017 to 2019. “Price-fixing is accurately described as the supreme evil with any trust.”

The FTC previously weighed in on an antitrust challenge from the U.S. Chamber of Commerce to a 2016 Seattle ordinance, which would have allowed gig workers to form unions despite their contractor status.

The city attempted to validate the ordinance under “Parker immunity,” a narrow legal doctrine that gives states some leeway to enact policies that would carve out antitrust exceptions by replacing competition with regulation. The agency said the city didn’t qualify for that immunity because Washington state didn’t have a policy authorizing for-hire drivers to coordinate prices.

The U.S. Court of Appeals for the Ninth Circuit ultimately agreed and the law was eventually scuttled.

A similar proposal in New York state earlier this year, which would have allowed gig workers to organize, was scrapped after worker advocates said it would strip workers of protections and not give them an equal seat at the bargaining table.

If gig workers want to bargain collectively they need a federal statutory exemption from antitrust, said Aaron Edlin, an economics and law professor at the University of California, Berkeley School of Law. States can’t grant an exemption and allow gig workers to organize unless the state clearly articulates the goal of interfering with free markets and supervises the activity, he said.

“The gig economy is ripe for antitrust investigation and federal rulemaking,” said Marshall Steinbaum, an assistant economics professor at the University of Utah. 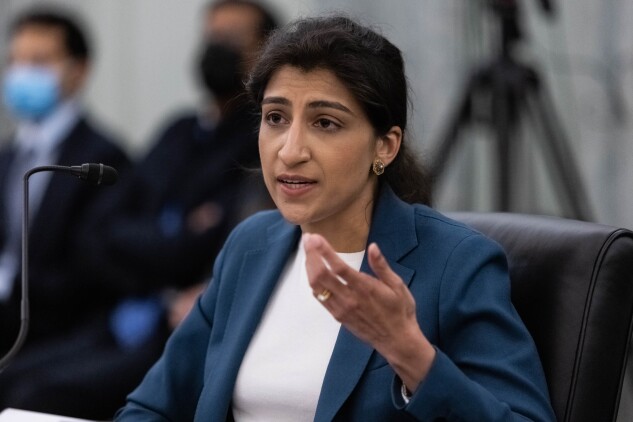 Congress is currently considering six new antitrust bills that would make it easier for the government to win cases against tech giants, but none contain provisions on labor markets related to technology companies.

Any legislation that expands the labor exemption’s application to independent contractors will need to be carefully drafted so that it doesn’t become a loophole that allows price fixing outside of labor markets, Hoffman said.

That fix might also come through additional guidance issued by the FTC and the DOJ, Khan said in a September letter to lawmakers. The agencies could include direction regarding the labor exemption, which has been narrowly interpreted by prior case law to not include independent contractors.

“The FTC guidance could be something that adds to the debate, certainly, but whether it’s guidance or a policy statement, they wouldn’t have the force of law,” said Jonathan Lewis, an antitrust partner at Lowenstein Sandler LLP in Washington.

VIDEO: App-based companies and governments are at odds over how to properly classify gig economy workers.

The question of whether gig workers should be employees or contractors has been targeted in employment litigation for years. At the same time, antitrust enforcement has focused on whether states can regulate competition among independent contractors that negotiate as a group.

Even absent union rights granted to employees, gig workers have joined together to push for better protections, such as when Uber and Lyft drivers staged a “nationwide strike” in July.

Some have achieved success, including in New York City where delivery drivers in September secured more pay, bathroom access, and other protections. Los Angeles drivers this summer coordinated to turn off their apps at the same time, similar to strike activity, because of a pay rate policy change. Massachusetts gig drivers currently are joining to stop a ballot initiative, bankrolled by major gig companies, that would classify them as contractors.

An answer for relieving the antitrust threat of lawsuits could come from states, which can grant collective bargaining rights to misclassified or properly classified workers, said Sandeep Vaheesan, legal director at the Open Markets Institute, an anti-monopoly organization in Washington.

“I want strong labor and employment rights under federal law that protects all workers regardless of whether they’re in Mississippi or Illinois. I think a federal solution is best but we might have to contend ourselves with state level fixes for the time being,” Vaheesan said. “Federal administrative action looks promising,” and the National Labor Relations Board, the U.S. Labor Department, and the FTC “could do a great deal to protect gig workers,” followed by states acting, he said.

Uber has withstood nearly every antitrust and unfair competition challenge launched against it, including in a recent case brought by taxi companies in the First Circuit.

The companies themselves may not bring suits against workers for antitrust violations, but they have attempted to further insulate themselves from worker activity, said Sanjukta Paul, an assistant professor of law at Wayne State University.

In Massachusetts, gig companies backed a bill that would essentially cement gig workers’ status as independent contractors. That law, which mirrors a similar ballot initiative in California, could further insulate companies from antitrust challenges, Paul noted.

“Drivers have been prevented from engaging in collective bargaining that labor law sets out to provide,” Paul said. “It’s a really big problem for labor law and the whole system.”