Facebook Inc. signage is displayed on a smartphone in an arranged photograph taken in New York on July 24.
Photographer: Gabby Jones/Bloomberg

The whistle-blower who turned over internal company documents to U.S. securities regulators is set to share her story publicly in Congress on Tuesday, planning to testify that the company misled the public and shareholders about the harmful effects of its platforms.

“Facebook became a $1 trillion company by paying for its profits with our safety, including the safety of our children,” Frances Haugen said in remarks prepared for a U.S. Senate hearing. “I came forward because I recognized a frightening truth: almost no one outside of Facebook knows what happens inside Facebook. The company’s leadership keeps vital information from the public, the U.S. government, its shareholders, and governments around the world.”

The hearing comes the day after Facebook and its photo-sharing platform Instagram and messaging service WhatsApp experienced rare global outages, and two days after Haugen revealed her identity in an interview with CBS’s “60 Minutes” on Sunday evening. The company’s shares fell 4.9% Monday, the most since November.

Haugen, 37, a former product manager at the company, will appear before a panel of the Senate Commerce Committee to testify about internal Facebook research that she says shows the company prioritized profit, stoking division, undermining democracy and harming the mental-health of its youngest users. Haugen shared Facebook’s internal research with the Securities and Exchange Commission as well as the Wall Street Journal. 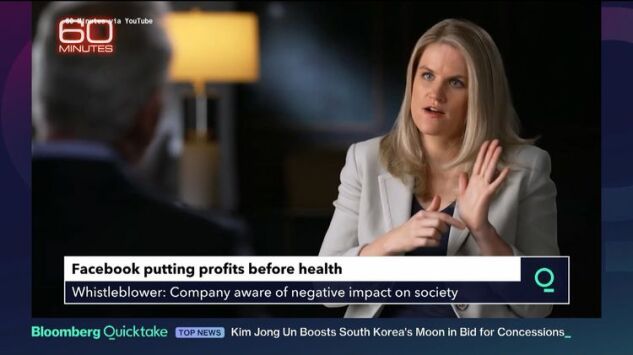 Senator of Connecticut, chair of the subcommittee holding the hearing, on Sunday praised Haugen’s “bravery in revealing terrible truths about one of the world’s most powerful, implacable corporate giants.”

“Facebook’s actions make clear that we cannot trust it to police itself,” Blumenthal said in a statement. “We must consider stronger oversight, effective protections for children, and tools for parents, among the needed reforms.”

The question for lawmakers now is how to craft and pass legislation to prevent the harm Haugen described. While there are numerous proposals to tighten regulations on internet companies, there has been little momentum so far to move bills through the process to become law.

Haugen will tell senators that the starting point for effective regulation is full access to Facebook data so that the public has insight into the company’s systems. Regulators today are blind to Facebook’s problems and how to craft solutions, she said.

“As long as Facebook is operating in the dark, it is accountable to no one,” she said. “And it will continue to make choices that go against the common good.”

Some advocates are pushing Congress to pass a comprehensive federal privacy law that would prevent social media companies from tracking users to expose them to more tailored -- and in some cases harmful -- content. Such a change would have huge implications for Facebook’s business model, which depends on keeping people engaged on the company’s platforms and delivering them more ads.

Senator of Tennessee, the subcommittee’s top Republican, said a “national consumer privacy bill is more than overdue,” as well as an update to the 1998 children’s privacy law that prohibits online tracking of people under 13. She was among the lawmakers last week who cheered Facebook’s announcement that it would pause plans for an Instagram service aimed at children.

Some lawmakers favor changing the Section 230 provision of a 1996 law that shields online platforms from liability for user-generated content. There are several bills that would remove legal protections for certain kinds of speech, like civil-rights violations or cyber-bullying, but there are limits to what Congress can outlaw without running afoul of the First Amendment’s freedom of speech guarantee.

Another approach would hold companies accountable not for the initial user posts, but for how their platforms disseminate content. One proposal from Senator of Massachusetts and Representative of California, both Democrats, would force companies to be more transparent about how algorithms spread information and would impose safety standards.

And there is a bipartisan push for stronger antitrust laws that would target large technology companies and impose restrictions on how they operate their platforms. Senator of Minnesota, who chairs the Senate antitrust subcommittee, said Facebook’s strategy of scooping up competitors -- like Instagram and WhatsApp -- robs the market of potential innovation that could come from alternative services.

“Obviously, we need privacy rules of the road and safety protections for kids, but you cannot neglect the issue of competition policy,” Klobuchar said in an interview. “We don’t know the bells and whistles that Instagram could have developed on their own with privacy controls and kids, or what they would have done if they hadn’t been bought by Facebook.”

Klobuchar also said the sheer size of Facebook means that the company’s missteps become societal problems on a global scale.

Forcing Facebook to be a better steward of its immense power will take a combination of all these legislative strategies, according to Rishi Bharwani, policy director for Accountable Tech, a group that advocates for reforms to social media.

“These companies are so large that no single legislative intervention will fully mitigate their societal harms,” Bharwani said. All of these approaches represent “things that Congress could pass by the end of this year, if they got their act together.”