With a new appetite for stepped-up antitrust enforcement sweeping Washington, big deals are already getting harder to do.

’s decision on Monday to abandon a $30 billion takeover of insurance brokerage after Justice Department pushback is the latest signal that transactions that consolidate industries could run into trouble.

The Justice Department in a statement said that the deal would have consolidated the insurance brokering industry from three big competitors to two.

“This is a victory for competition and for American businesses, and ultimately, for their customers, employees and retirees across the country,” Attorney General said in a statement.

The news could represent a major threat to a boom in mergers and acquisitions that had started in the second half of last year after a rebound following the height of the Covid-19 pandemic.

President has vowed to take on the U.S. economy’s most dominant companies with an executive order this month that puts the weight of the federal government behind a sweeping effort that will target everything from airline baggage fees to soaring prescription drug prices.

Last month, the House Judiciary Committee approved an antitrust bill that would force large technology companies like to exit certain businesses, a signature proposal within a package of measures aimed at reining in the companies and spurring competition in digital markets.

Biden has also named advocates of tougher antitrust enforcement to key positions in his administration.

The new leaders of the Justice Department’s antitrust division and the , which share a mandate to enforce antitrust laws, are bringing progressive views to these agencies, according to Bloomberg Intelligence antitrust analyst .

“These are all people who have expressed concerns that antitrust enforcement has been too lax and it needs to be tightened up,” Rie said. “One of the first places to shore things up without new legislation is to scrutinize deals.”

The new regime has companies changing how they think about deals, experts say.

“Clients are approaching deals more cautiously and recognizing that it might be more difficult to get through review,” , a partner at law firm Baker & McKenzie LLP and chair of its North American transactional practices, said in an interview. “They’re budgeting from an expense and timing perspective that these deals may take longer and be more expensive to get done.”

terminated its acquisition of some pipeline assets from Dominion Energy Inc. after failing to win approval from the FTC. Another deal that hangs in the balance is ’s $7 billion acquisition of Grail Inc., which the FTC in March.

’s proposed takeover of Aerojet Rocketdyne Holdings Inc. is also being closely watched. Last week, Senator , a Massachusetts Democrat, sent a letter to the FTC noting that Aerojet is the “the last remaining independent domestic propulsion supplier” and urging the agency to prevent monopolies in the defense industry.

Aon-Willis was the first deal with a value greater than $10 billion that has died for regulatory reasons since Biden announced the tougher stance on consolidation.

Dead deals are piling up, including global transactions that collapsed for other reasons -- like not getting enough shareholder support -- as in the case of Germany’s Vonovia SE’s roughly 19 billion-euro ($22.3 billion) offer for rival Deutsche Wohnen SE.

There have been a total of $149 billion worth of deals terminated to date this quarter, a third of the $446 billion in global deals that have died so far this year, according to data compiled by Bloomberg. 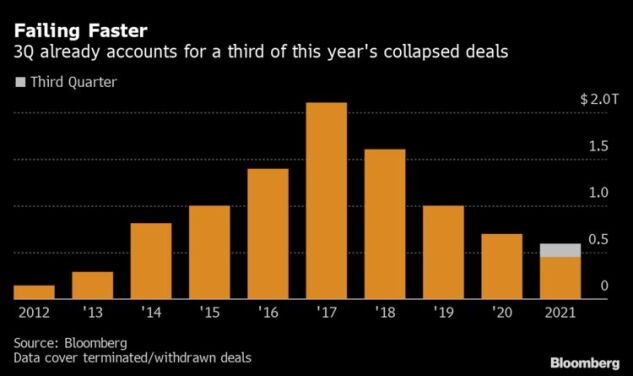 To be sure, deal activity is still having a great year. Buyers and sellers have announced $2.8 trillion of deals so far in 2021, an unprecedented number that puts this year on track to be the most active ever, according to data compiled by Bloomberg.

Large technology deals could be next to suffer after last week’s news that Biden to nominate as head of the Justice Department’s antitrust division. Kanter, 47, who left one of the country’s biggest law firms last year to start his own firm, is a long-time foe of ’s Google, and has represented companies that have pushed antitrust enforcers to sue the search giant.