Big tech’s most well-known names are bracing for potentially simultaneous multi-year antitrust battles with the government that risk the companies’ existence.

There aren’t that many law firms with the highest caliber antitrust practices—and those that do could soon be billing seven figures a month.

“This is what they dream of, these big resource intensive matters,” Douglas Melamed, a former Justice Department antitrust official, said.

The Justice Department is set to investigate Apple Inc. and Alphabet Inc.'s Google, while the Federal Trade Commission will probe Amazon.com Inc. and Facebook Inc.

Most tech companies will likely turn to law firms they are currently working with to handle the preliminary steps of the government’s probe, Melamed, who helped lead the DOJ’s antitrust case against Microsoft Corp. in 2000, said.

If the investigation leads to litigation, tech companies may retain additional outside counsel from a variety of firms to strengthen their defense, he added.

“Ultimately the bodies that are handling these probes are from the outside firm,” Charles Rule, co-chair of Paul, Weiss, Rifkind, Wharton & Garrison LLP’s antitrust group, said.

Apple and Google have a handful of familiar outside attorneys for the preliminary investigations, as the companies have dealt with numerous antitrust court appearances over the past three years.

Apple has been represented by Boies Schiller Flexner LLP in more than 40% of its antitrust matters in the past three years, according to Bloomberg Law’s litigation analytics.

David Boies, who is the firm’s chairman and managing partner, served as special trial counsel for the DOJ’s suit against Microsoft. Apple has also hired Wilmer Cutler Pickering Hale & Dorr LLP in several matters. WilmerHale also represented the DOJ during the Microsoft trial.

Google has turned to Wilson Sonsini Goodrich & Rosati for an ongoing private antitrust case accusing the search giant of monopolizing the online search advertising market. Wilson Sonsini also helped Google fend off the FTC back in 2011 when the agency investigated the company’s search practices. The FTC closed the case in 2013 without penalizing Google. 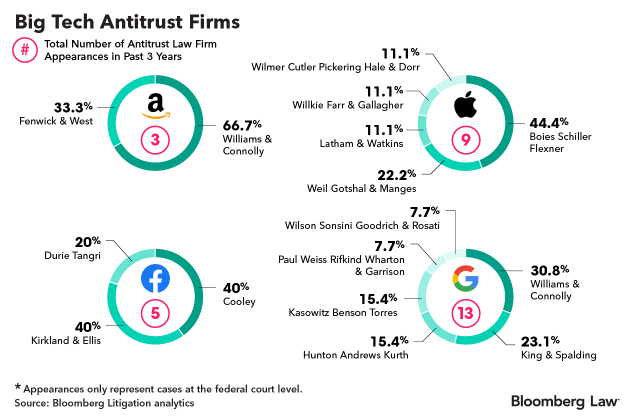 Google is also a client of Paul Weiss, which represented Microsoft during the DOJ’s antitrust trial.

Google has relied on Cleary Gottlieb Steen & Hamilton LLP for most international probes, including the EU’s nearly $3 billion antitrust fine accusing the company of rigging its search results to favor its own products. Cleary also represented IBM Corp. in its nearly 13-year antitrust case brought by the DOJ. The government eventually dropped the case in 1982.

Amazon and Facebook haven’t retained big law firms for as much antitrust work since they’ve been less involved in competition-focused litigation than other tech giants.

Facebook has only dealt with five federal antitrust cases in the past three years, heavily relying on Cooley LLP and Kirkland & Ellis LLP for 80% of the workload, according to Bloomberg Law’s litigation analytics. Amazon has handled three antitrust probes over the last three years, counting on Williams & Connolly LLP to handle more than 65% of its federal court workload.

All four tech companies have been preparing for additional antitrust scrutiny by beefing up their in-house antitrust counsel and lobbying teams, according to Bloomberg News. However, the companies will pass a sizable portion of the work related to the FTC and DOJ’s probes to outside firms, Eleanor Tyler, Bloomberg Law’s senior litigation analyst, said.

“Most companies will hire several people in-house but will farm out the actual dealings of most of the investigation to outside counsel because they [outside counsel] can throw bodies at it,” she said.

Outside counsel will account for the bulk of the target companies’ expenses stemming from any probes, Melamed said.

“These fees can be very substantial, perhaps in the low seven figures per month for a period of time,” he added.

Legal fees can quickly add up when responding to discovery, said Rule, who was retained as outside counsel by Microsoft for it’s antitrust case.

The DOJ’s potential probes for Google and Apple would involve a more vigorous discovery process called civil investigative demand, which is a type of subpoena that often requires both discovery and depositions, Rule said. “That really is where most of the manpower is,” he added.

“The result is more important than the price, so as a result there’s a lot of price elasticity that can command very high rates,” Zimmerman added.

To tackle such extensive probes, each company will likely need an outside counsel comprised of “about 5 to 10 partners, 25 to 50 associates and literally hundreds of contract attorneys,” Rule said.

“In cases like these—that are so huge and probably viewed as bet-the-company matters—those kinds of numbers are not outrageous,” Rule said.

-With assistance from Alexis Kramer