President promised to “fight for fairer prices” for farmers and consumers Monday as he announced plans to combat the market power of the giant conglomerates that dominate meat and poultry processing.

Biden joined Agriculture Secretary and Attorney General to meet virtually with ranchers and farmers to hear complaints about consolidation in the industry, ratcheting up a White House campaign blaming anti-competitive practices in the industry for contributing to surging food inflation.

Biden launched a portal that will allow producers to report unfair trade practices by meatpackers. He also highlighted initiatives the administration is taking to counter meatpackers’ economic power, including $1 billion in federal aid to assist expansion of independent processors and new competition regulations under consideration.

The announcement focuses fresh attention on Biden’s fight with the meat-processing industry and helps cast him as a president willing to take on powerful business interests over consumer prices. Many Democrats are concerned that months of negotiations over Biden’s economic plan have distanced him too much from the most pressing kitchen-table problems facing Americans.

Inflation has swiftly moved to the top of public concerns as the annual rise in consumer prices hit its highest level in almost 40 years. Meat prices, which in November were up 16% from a year earlier, have been the biggest contributor to grocery inflation. Meatpacking industry representatives blame soaring prices on labor shortages, rising fuel prices and supply-chain constraints.

Scott Blubaugh, president of the Oklahoma Farmers Union, praised the initiative. “Not since Teddy Roosevelt have we had a president that’s willing to take on this big issue,” he said.

But others were skeptical it would do enough. “The Administration has not announced that it will take decisive enforcement action to protect America’s cattle producers from the harms they’ve been experiencing for the past seven years, and we remain disappointed with that omission,” , chief executive officer of R-CALF USA, a group that represents independent cattle producers.

Biden didn’t answer a question on whether he would seek to break up large meat-processing companies. His efforts to inject more competition in the industry run counter to decades of consolidation since the late 1970s as the industry shifted to larger plants to cut costs and courts adopted a more permissive interpretation of antitrust law.

Companies including JBS have that a shortage of workers is affecting operations in every developed nation, limiting production increases and raising costs.

“Labor remains the biggest challenge,” Sarah Little, a spokeswoman for the North American Meat Institute, a trade group, said in a statement. “Our members of all sizes cannot operate at capacity because they struggle to employ a long-term stable workforce. New capacity and expanded capacity created by the government will have the same problem.”

Mike Brown, president of the National Chicken Council, a poultry trade group, said levels of concentration in the sector haven’t changed much over the past 20 years.

“It’s time for the White House to stop playing chicken with our food system and stop using the meat industry as a scapegoat for the significant challenges facing our economy,” Brown said in an emailed statement.

Biden singled out the meat and poultry processing industries for scrutiny in a July executive order on promoting competition across the economy. His top economic adviser later criticized meatpackers for “.” The U.S. Agriculture Department also announced in June to consider three new sets of regulations on unfair trade practices in livestock and poultry markets, with officials anticipating the proposal of new rules early this year.

The president has placed critics of corporate consolidation in key positions across his administration, including as chair of the Federal Trade Commission and as assistant attorney general for antitrust. 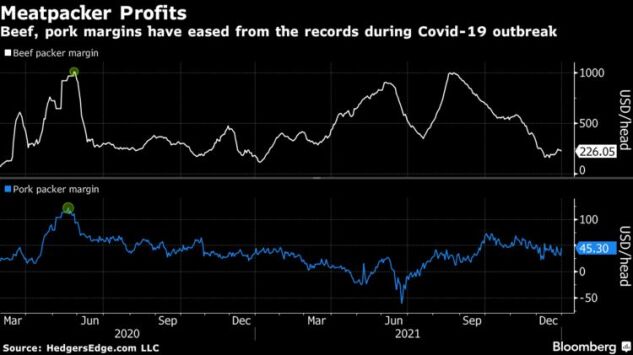 A fact sheet the White House distributed to reporters asserts that as a result of that concentration, most livestock producers “now have little or no choice of buyer for their product and little leverage to negotiate.” reported on its beef processing in quarterly earnings released in November.

In November, ranchers received 36.7 cents for every dollar consumers spent on beef at the grocery store, down from 51.5 cents in 2015, according to the Agriculture Department. Fifty years ago, their share was more than 60 cents, according to the White House.

“This is a decades-long trend that we are seeing,” said , Deputy Director of the National Economic Council, in an interview with Bloomberg Television. “The result, based on the economic literature, is higher prices for folks, fewer options for workers, which means that there’s downward pressure on wages. It also means that there’s less innovation and productivity.”

The aid for independent meat and poultry processors, which will come from Covid relief funds, includes $375 million for gap financing grants and $100 million for guarantees of loans made through private banks, according to the fact sheet.

Ted Schroeder, a Kansas State University agricultural economics professor who specializes in livestock markets, said it’s difficult to forecast the overall impact of Biden’s efforts, but expressed doubt the federal aid for independent processors will alter the market much.

Meatpacking is a cyclical business and processors may soon be squeezed again as droughts and higher feed grain prices drive up cattle prices, he said.

“How can smaller, higher cost, highly leveraged new plants hope to survive through such a market environment in the next few years? I am concerned many will not,” Schroeder said.