This year has brought fair winds and following seas for semiconductors, carried interest, and even prospective electric vehicle drivers, but proponents of the expanded child tax credit haven’t had such smooth sailing. While advocates must continue to push for an extension, work can be done now to improve access to the existing credit for those who qualify.

When it expired in January 2022, the temporary expansion of the child tax credit illustrated why it never should have been temporary in the first place. Immediately, 3.7 million more children were cast into poverty. To put that into perspective, imagine every human being in Connecticut was a child, and an expiring bill pushed every one of them into poverty—that is, in addition to all the children already in poverty (about 12.5 million, so the population of Illinois).

By way of background, the expanded child tax credit was passed through the American Rescue Plan in March 2021, and it was hailed by some as a virtual second war on poverty. When it expired a year later, it was clear the offensive was short and at best a stalemate. The expanded credit needs to be restored, but until it is, there are some thing that can be done.

Get the Word Out

In June 2021, the IRS published data with counts, organized by ZIP code, of children under age 18 with a Social Security number that are not claimed on a tax return but appear on Form 1095 providing information regarding health insurance coverage. These are often children for which a child tax credit is available but has not been claimed—mostly because some children may appear on multiple forms and thus be counted more than once, some policy holders may file multiple forms after changing employers, and there may be children that are eligible that do not appear for various reasons. For our purposes, that data is accurate enough, as we are mostly interested in where the eligible credit recipients reside.

If you survey the ZIP code totals, you will see that the eligible children broadly cluster in the major metropolitan areas—as one would expect. With a higher population, the raw totals are going to be higher, even as the eligible children as a percentage of the total population may be smaller. If looking at the success of an individual state in getting the word out on the child tax credit was the goal, a weighed percentage would be in order. But here, we are looking to find ways to inform as many taxpayers as possible to get as many eligible children claimed as possible. 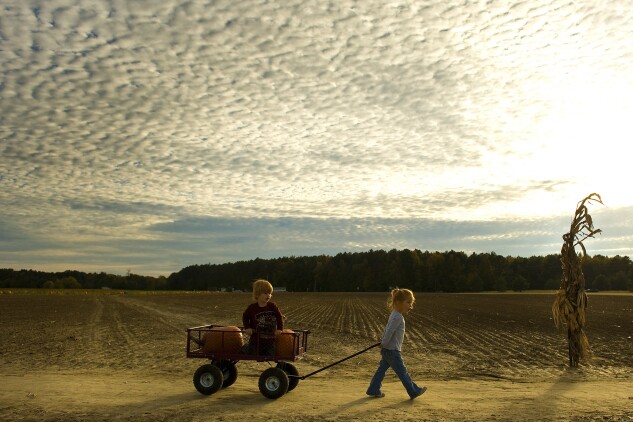 A young girl pulls her brother and some pumpkins in a wagon as they visit a pumpkin patch on Oct. 22, 2009 in Easton, Md.
Photographer: Jim Watson/AFP via Getty Images

Think like an advertiser. We have vital information regarding our target audience—we know where they live. This can tell us a bit about things like their demographics and the types of media they may consume.

I’m from New Jersey. There are a couple of major locales with eligible children in New Jersey, but the most apparent one is ZIP code 08701—Lakewood. Situated in Ocean County, the portion of Lakewood assigned to that ZIP code has a population of 92,000 and 9,407 eligible children aged 1 to 5. Around two-thirds of Lakewood residents are Orthodox Jewish, and the town went overwhelmingly (82.5%) for Donald Trump in the 2020 presidential election. Indeed, in presidential elections, it was a landslide for the Republican candidate every cycle for the last 22 years.

Lakewood has a local weekly magazine, the Voice of Lakewood, and a popular local news site, the Lakewood Scoop. It is also served by a more broadly circulated newspaper, the Asbury Park Press. There is a radio station, WMDI-LP, which is owned by the American Institute for Jewish Education and which serves the surrounding community. Finally, but perhaps most importantly, there are local leaders in the community who can be reached out to and enlisted to help get the word out.

This is the kind of simple research and less simple praxis that must be undertaken. Advocating for programs for underserved communities is important. But connecting those communities with programs already in existence not only improves quality of life but also increases awareness of said programs—making them more difficult to sacrifice politically, or let expire, in the future.

Volunteer Income Tax Assistance is available for individuals who generally make $58,000 or less, have a disability, or speak English as a second language. The IRS maintains a portal to field applications from volunteers that wish to lend a hand in VITA or Tax Counseling for the Elderly programs. These kinds of programs help more than 3 million people not only ensure they are properly filing their taxes but also make certain they are receiving the vital assistance, like the child tax credit, they are entitled to.

In the absence of movement on the federal front, several states have introduced programs to augment the existing program. For example, in Connecticut, the state rebate provides $250 per eligible child with a maximum per-family payment of $750 for residents meeting income requirements. These kinds of programs can lend much-needed relief and shine a light on federal inaction.

At the risk of sounding alarmist, I will once again reiterate the effectiveness of the expanded credit in lifting children out of poverty and, consequentially, the stain on a society that doesn’t see the apolitical benefit in renewing the program. Opponents’ logic is simple—if the expanded credit has no work requirement, then parents will simply stay home and refuse to work. Put simply, the argument against the expanded child tax credit is: We must allow children to suffer to scare adults into showing up.

This is a regular column from tax and technology attorney Andrew Leahey, principal at Hunter Creek Consulting and a sales suppression expert. Look for Leahey’s column on Bloomberg Tax, and follow him on Twitter at @leahey.