Customers queue at a Citibank location in Moscow on Feb. 24, after Russia invaded Ukraine. Citigroup is weighing scenarios to determine how its exposure in Russia will shake out in its financial statements.
Photographer: Andrey Rudakov/Bloomberg

Major U.S. companies like McDonald’s Corp. and PepsiCo Inc. that exited or scaled back their business in Russia have just a few weeks to assess how economic sanctions and the Ukraine war will cascade through their first-quarter financial statements and potentially erode their earnings.

Corporate America’s sudden retreat from Russia and fallout from the war could render property and cash left behind worthless, wipe out long-term investments, and dent sales revenues.

The uncertainty over the war and ever-tightening sanctions is putting pressure on sensitive financial reporting decisions as the deadline to file first-quarter results approaches. Companies will have to quickly assess the possible toll on their results and convey the risk to investors, even if it doesn’t add up to big dollars yet.

SIGN UP for The Exchange, our free weekly tax newsletter

“It’s a fluid situation that needs to be continuously monitored, and that makes it very challenging,” said Andrew Winters, partner in the national office at Deloitte & Touche LLP.

Visa Inc.’s CFO Vasant Prabhu, for example, told investors in March that the company would lose 4% of revenue from suspending its Russia business but that “as far as the broader impact on the business goes, it’s too early to tell.” 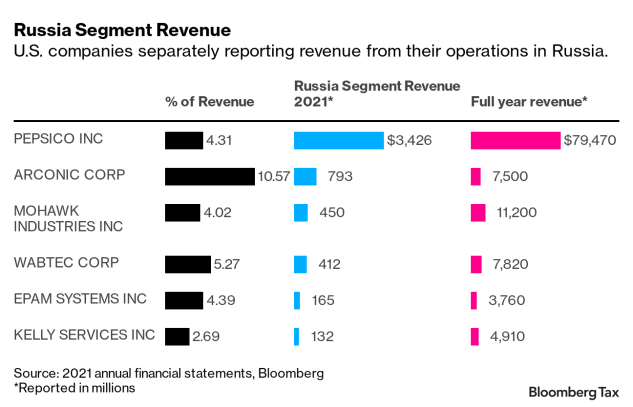 Here’s a look at some of the accounting ramifications that companies will have to consider:

The crisis in Ukraine threatens cash flow projections for companies operating not just in Russia, but in Eastern Europe and beyond. Doubt about future cash flows means previous forecasts may no longer hold up, which becomes a trigger for companies to consider whether their assets—from cash to investments to physical property— have lost value.

“You could have impairment risks, potentially, even if you don’t have a subsidiary. What if you have receivables due from an entity in Russia? Are you going to be able to collect? Impairment can cover a lot of things,” Winters said.

Several companies in recent filings, investor presentations, and analyst calls warned that they’d have to make these assessments.

Papa John’s International Inc. said in a March filing said that it held $15.2 million worth of accounts and notes receivable in Russia and had to review whether any of it would need to be written down. The amount relates to loans with a master franchisee that operates there. The pizza chain also said franchise royalties totaled less than 1% of the company’s revenue in 2021.

The challenge for CFOs is to get the timing right: not writing off assets if they don’t need to, but not waiting too long, either.

Companies that have pulled out of Russia should probably write off all the assets they have sitting there, said Heidi Bartholomew, a professor at the Katz Graduate School of Business at the University of Pittsburgh.

“Those assets, if you’re not going to be able to use them, and you don’t intend to use them and you’ve pulled all your people, can you really argue that those assets have any value? And they probably don’t,” Bartholomew said.

Intangible assets like goodwill related to subsidiaries based in Russia likely also will lose value if they are tied to customers in Russia or elsewhere in Eastern Europe. Companies will have to consider if they can maintain profits in the coming years that would justify leaving the value of goodwill on its balance sheet.

“If everything is shut down because war is going on, it’s hard for them to have a profit that supports the goodwill,” Bartholomew said.

Direct revenue exposure to Russia is limited for most U.S. companies, according to an April 7 note from Morgan Stanley analysts. Some companies have bigger risks than others.

PepsiCo Inc., which earns roughly 4% of its $79.5 billion in revenue from Russia, halted the sale of its signature soda and other beverages and suspended both capital investments and advertising in Russia. The company hasn’t disclosed what effect the sales suspension will have; it reports earnings on April 25.

Under U.S. accounting rules, companies must make their best judgments as to what sales revenue they expect to earn from customers, among other steps to calculate revenue, and to tell investors about anything that could significantly sway those figures.

“Nobody gets off the hook,” said Todd Rahn, senior managing director with the risks and investigations practice at FTI Consulting Inc. “You just have to take your best estimate.”

McDonald’s, which has closed all its restaurants in Russia, said in late February that revenue from Russia and Ukraine represents 9% of the company’s total revenues. It hasn’t yet disclosed what the impact of the store closures will be. It announces earnings on April 28.

Weatherford International PLC told investors last month that its first-quarter guidance could be affected by the spiraling value of the ruble. As much as 7% of its sales stems from Russia, but the oilfield services company predicted steady revenue growth due to global energy demand.

Determining the foreign exchange rate for distressed currencies like the ruble can be difficult. Those rates affect both the investments a U.S. parent company has made into its Russian business—shifting other comprehensive income—as well as the value of other investments or cash sitting in a bank, as transaction losses could hit earnings.

“Companies need to be preparing themselves for what may be a more difficult conversation around foreign exchange and how that gets reported in their financial statements,” Rahn said.

Citigroup Inc. said that it had hedged its $1 billion net investment in Russia to guard against the risk of foreign currency devaluation. The bank also has $9.8 billion in other exposure to Russia, including loans, government debt and cash, according to its annual report filed in February. The company’s CFO told an investor conference in March that the bank was weighing several scenarios to determine how that exposure would shake out in its financial statements.

If a company has trouble getting cash out of a country or difficulty exchanging the cash, that could be an indicator under U.S. accounting rules that the company no longer has the ability to control operations there. For U.S. companies with subsidiaries in Russia, that’s a problem, said Scott Ehrlich, founder of Mind the GAAP LLC, an accounting consulting firm.

“You may have to stop consolidating it because you no longer demonstrate you can control it,” Ehrlich said.

Consolidating a subsidiary or related entity means a company reports all its assets and liabilities on its balance sheet. The accounting guidance is notoriously complex, and it’s ultimately a judgment call as to whether a company has the power to direct activities most significant to the entity. If so, the company can report these operations on its balance sheet.

De-consolidating has big impacts. Any assets or liabilities of a subsidiary essentially disappear from the company’s balance sheet, dinging income. For subsidiaries that carry debt, a company could end up recording a gain.

“There’s just so many tentacles to this,” Ehrlich said.