Crypto’s nosedive is expected to shred the balance sheet of MicroStrategy Inc., the enterprise software maker that bet big on Bitcoin and whose stock price rides the same rollercoaster as the digital currency.

Investors won’t know the extent of the impact until later this summer, when the company holds its earnings call and publishes its second-quarter 10-Q.

“Typically we do it in the Q,” a MicroStrategy investor relations liaison said. “We will continue that practice.”

Technically speaking, Wall Street regulators require companies to flag big losses—even those on paper—much earlier. Post-Enron rules call on companies to identify material impairments within four business days of determining a hit and to release a special 8-K to warn the market of coming pain.

Few companies actually issue these special forms, securities filings show. So far in 2022, 19 companies have flagged big impairments via the special 8-K, with electric power company AES Corp. filing the most recent. AES said June 24 that it would book an impairment charge next quarter in the range of $450 million to $550 million related to the expected shutdown of a power plant in Bulgaria. Fifty companies issued material impairment 8-Ks in 2021.

As interest rates rise, inflation woes continue, and concerns about a recession dampens outlooks, more companies are likely to have to make the financial reporting judgment call to trigger a special filing. Most will not follow through, said Bruce Pounder, founder and executive director of GAAP Lab, an advisory firm. 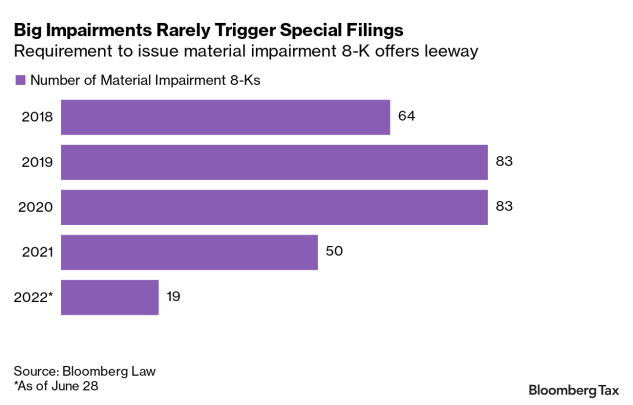 That’s because the rules about when to issue the 8-Ks have built-in wiggle room. If a company discovers an impairment in connection with its normal quarter- or year-end reporting, it doesn’t have to issue a separate 8-K as long as it appropriately records and discloses the impairment in its next periodic report, said George Wilson, director of the SEC Institute at the Practising Law Institute.

“If they want to, they could argue that this is all part of a normal period-end processing and they don’t have to do anything if they appropriately record and disclose it in their next Q,” Wilson said.

In 2013, the SEC issued guidance clarifying what it meant by an impairment conclusion made “in connection with” the preparation, review, or audit of financial statements to be included in the next periodic report. If an impairment conclusion is made at a time that coincided with, but is not in connection with, the financial statement process, no 8-K is required, the SEC said.

“This really takes this loophole and blows it up even bigger,” Pounder said. “Most registrants are always in the process of doing something.”

For MicroStrategy, which spent almost $4 billion buying Bitcoin in the past two years, a significant impairment is nigh. Even if Bitcoin bounces back, oft-criticized accounting rules mean it has to book an impairment reflecting the mid-June slide.

Treating crypto-assets as intangible assets means companies that don’t qualify as investment companies record digital currencies on their balance sheets at historical cost and adjust the value if there are events or triggers that signal the value has declined. Companies only get to record dips, never recoveries if the value rebounds. While US accounting rulemakers mull changes to the rules, the current accounting means that for volatile digital assets, companies often have to record impairments unless they sell their holdings at a profit.

MicroStrategy has an unusual, outsized exposure to Bitcoin compared with other operating companies. The Tysons Corner, Va.-based company started buying Bitcoin in 2020, and in 2021 it announced that buying and investing in Bitcoin was a central business strategy, along with making enterprise software. In its latest purchase, the company announced Wednesday via an 8-K that it had bought 480 more for about $10 million in cash between May 3 and June 28 .

When Bitcoin’s value soared, so did the company’s share price. But then came the crypto winter. When Bitcoin’s price plunged below $18,000 in mid-June, it meant that all but two of the company’s announced acquisitions were impaired. MicroStrategy’s stock price reached a high of $860 when Bitcoin peaked in November, tumbling more than 80% by mid-June. It closed at $186.12 on Tuesday, up 22% since the low point. 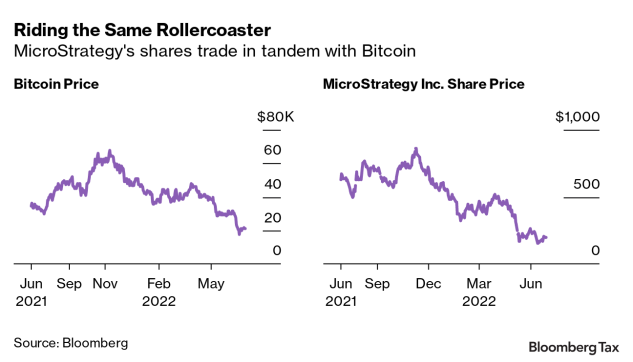 Bitcoin also has increased since the mid-June low, trading above $20,000 the week of June 28. But any rebound between now and the quarter close won’t change the accounting implications for companies that hold significant amounts of Bitcoin.

“One of the things about [crypto] impairments is it doesn’t matter if it goes back up, you write it down to the lowest price,” said Derryck Coleman, director of research at Audit Analytics.

(Update in paragraph 15 to include MicroStrategy's latest Bitcoin purchase announcement.)