Mazars USA LLP faces supporting its longtime client while also cooperating with authorities who have now charged the Trump Organization with tax fraud.

The firm could opt to end its decades-long relationship with the Trump Organization. But walking away from a client doesn’t end the firm’s professional obligations nor would it halt inquiries into its past work for Trump’s global real estate business.

Mazars may be stuck with Trump for better or worse. In the short term, the criminal case in New York and an ongoing congressional investigation could stain the firm’s reputation. Partners may leave, clients may switch to another CPA firm, revenues could slump.

But there’s also an opportunity to bolster the firm’s reputation and position among the 30 largest firms in the country by standing by its client and its work.

“Accounting firms are going to have clients that have difficulties of one sort or another. And the test of whether or not this accounting firm could be a trusted business partner for a company is how they handle this situation,” said Jon Baumunk, accounting ethics lecturer at San Diego State University. 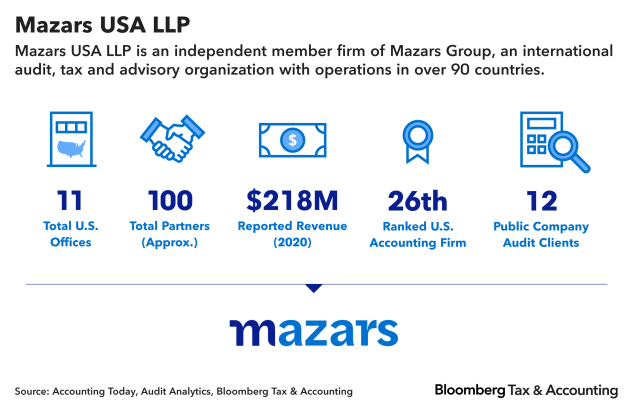 Mazars declined to comment about the impact that the criminal charges against the Trump Organization has had on the firm, nor its current business relationship with the real estate developer.

“Due to our industry’s professional obligations Mazars cannot discuss any clients—current or former, the status of our relationships, or the nature of our services in a public forum without client consent or as required by law. We remain committed to fulfilling all of our professional and legal obligations,” the firm said in a statement.

Mazars has complied with a New York grand jury subpoena, turning over eight years worth of records related to former President Donald Trump’s personal and business tax returns to state prosecutors. Related records remain under dispute as part of a congressional inquiry into Trump’s finances.

But those ethics rules don’t bar the firm from ending a client relationship—an option a firm should consider if a client posed a threat to its reputation, said Joe Schroeder, associate professor of accounting at Indiana University.

And right now Mazars’ brand is being harmed because of its association with Trump, he said.

“The only thing you are selling is your reputation,” he said of CPA firms. “And the minute that your reputation is in question, it’s going to be hard for you to do business.”

When to Walk, or Stay

Risks to a firm’s reputation can spread. Clients may not want to be associated with a firm or its controversial client and could find a new CPA firm to protect their own brand. Others may leave to minimize the chance that investigators would start probing their own tax reporting, he said.

The risks also could cascade to the firm’s partners, who could also decide they don’t want to be associated with the firm and set up shop elsewhere, he said.

Both could result in lower revenues for the firm.

The firm now has 11 offices across the U.S. and roughly 100 partners, and reported $218 million in revenue last year. Mazars USA, part of the Belgium-based global network, has lost ground among the top U.S. firms in recent years, losing partners and sliding from the No. 24 post to No. 26 despite revenue gains, according to Accounting Today’s annual ranking of the Top 100 firms.

Mazars, through a series of mergers dating back decades, basically inherited Donald Trump’s business from his father Fred, according to a Pro Publica story.

“People are entitled to counsel,” Dell said. “The mere fact that a client is controversial or facing investigations doesn’t mean that you need to or have a professional responsibility to drop them.”

Accountants’ duty to protect the confidential records of a former client doesn’t end when the fees stop coming in, and the work the firm completed is still their work, Dell said.

Those obligations are spelled out in the profession’s code of conduct, an ethics playbook often baked into state laws and regulations that govern public accounting. Violations could cost a CPA their license.

Whether Mazars would face criminal charges is unlikely, said Cliff Capdevielle, managing attorney with Moskowitz LLP. “There is very little risk of criminal indictment against a tax preparer unless they had the two sets of books and reported something that was false. And that almost never happens,” he said.

A tax preparer’s role is limited to receiving the numbers from the client and dropping it into the tax return. The client is ultimately responsible for the accuracy of that information. But providing tax planning advice could open up a firm to fines or penalties, said Allison Koester, a corporate taxation researcher at Georgetown University.

The Trump Organization and its former CFO face tax fraud charges for what prosecutors described as a more than15-year tax scheme designed to under-report income and taxable benefits paid to certain employees, effectively lowering the tax bill for both the employees and the company.

It’s not unusual during a tax investigation for authorities to take testimony from the accountants who did that work. But those investigations don’t always result in charges or allegations of wrongdoing by those outside professionals, Dell said

It’s also not uncommon for a taxpayer to argue that they simply followed the advice of their hired CPA firm, and for the firm to say that it relied on the information provided by the client. “There will be finger-pointing,” said Jack Barcal, associate professor of taxation at USC Marshall School of Business.

Such a defense strategy might not hold up if that outside consultant or accountant didn’t have all the information they needed to properly advise the client—something prosecutors would want to know before pursuing charges, said David Sharfstein, a former federal tax prosecutor who is now a partner with Hogan Lovells US LLP.

Criminal charges against the largest U.S. accounting firms are rare, although the Big Four accounting firms have each faced brushes with federal scrutiny for their tax planning work over the years.

KPMG LLP avoided prosecution for a massive tax shelter scheme after agreeing to a $456 million settlement with the Justice Department in 2005. But it is the specter of Arthur Andersen’s collapse that still haunts the accounting industry two decades later.

That firm was struggling under the weight of a string of pricey settlements related to its audit work but a criminal conviction, though later overturned, related to its audit client Enron Corp. sealed the firm’s fate. The case stands as a stark example of how lucrative clients can skew the judgment, and ethics, of accountants.

Firms with a smaller portfolio may feel more pressure to acquiesce to a large client’s demands. “Is the money worth the potential harm to their reputation and litigation exposure,” Schroeder said.

To contact the editors responsible for this story: at jharrington@bloombergindustry.com; at jdunbar@bloomberglaw.com