Auditors issued fewer warnings that U.S. companies risked going out of business in 2020 despite the lethal threat that the coronavirus pandemic posed to retailers, manufacturers, and hospitality businesses.

U.S.-listed companies generally adapted to an economic landscape reshaped by Covid-19. But the financial fallout may not be over yet as companies could still uncover and correct past errors in how they reported key figures for expenses and assets over the past year, according to an Audit Analytics report released Tuesday.

The study looked at key metrics commonly used to gauge the reliability of financial reporting and how they fared amid the uncertainty of a global pandemic with its furloughs, shutdowns, and dried-up supply chains. Here’s a look at four ways the pandemic impacted financial reporting.

The pandemic didn’t have as much impact on companies’ ability to survive its punch as originally expected, said Derryck Coleman, Audit Analytics’ director of research analytics. “Because there was so much government intervention, we actually saw fewer going concerns in 2020 than we did in previous years,” he said. 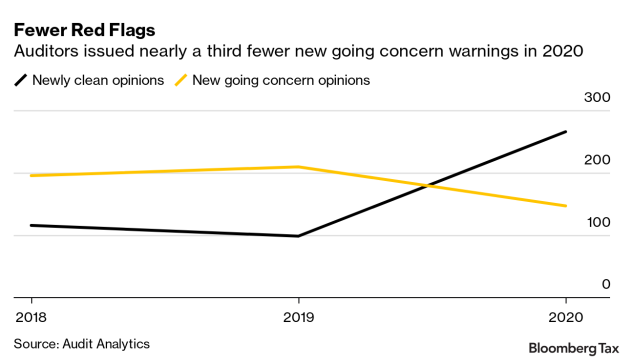 Auditors include the warnings in their annual report to investors, although accounting rules also require corporate management to issue similar warnings if certain conditions arise midyear. Among companies with pre-existing going concern warnings, 265 were able to address those risks and remove the warnings in 2020—a jump from 2019, the report said.

“This pandemic was just unique just given the size of the drop and then the quickness of the recovery,” said Ron Graziano, accounting and tax research analyst for Credit Suisse LLC.

The liquidity provided by the Federal Reserve and other stimulus programs offered by the federal government all buoyed that rapid recovery, he said.

Impairments soared in 2020 to $518 billion—nearly double the total for the previous year and the largest collective write-down in the last five years. The figure reflects altered forecasts and assumptions that underpin models used to value physical assets like retail stores and oil reserves as well as intellectual property like patents and other intangible assets. 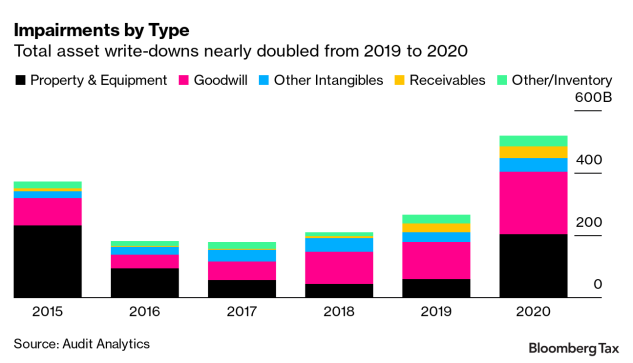 Retail, mining, and the services industries saw some of the largest spikes from 2019 to 2020, the report said.

Impairments booked during the height of the pandemic by the largest companies amounted to only a rounding error. Companies among the S&P 500 recorded more than $12 trillion in revenue in 2020 combined, despite any pandemic-driven losses or write-downs, said Pranav Ghai, CEO of Calcbench Inc.

Asset impairments during a crisis are almost expected, and the market largely shrugged off big write-downs over the last year. Still, they do matter, because companies previously spent cash or took on debt to buy those assets, Graziano said.

“It can be a telling sign for the company going forward,” he said. “It can really reset the market’s expectations about future cash flows. Their ability to deploy capital is probably the biggest hangover that can occur when you take one of these big impairments.”

More than 800 companies disclosed changes in their internal controls related to the pandemic’s shifting risks. Those internal checks, designed to ensure that investors can trust corporate reporting, include basic protections like segregating the duties of staff accountants. Most of the internal control disclosures addressed personnel changes such as remote work or segregation of duties, according to the report. 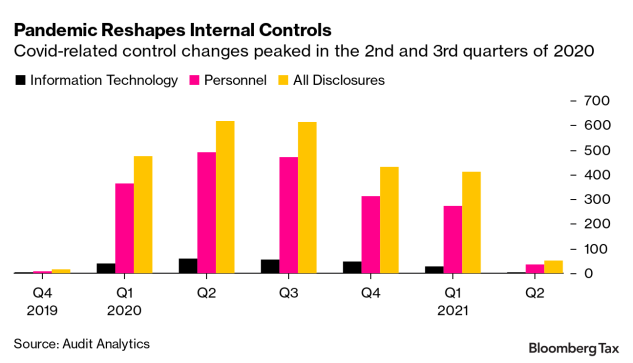 Overall, the number of disclosed revisions to those financial reporting safety nets was in line with previous years. But the altered control environment poses the risk of future restatements, as some companies also reported struggling to fix gaps in those controls, Coleman said.

Companies issued just 80 restatements in 2020—a slight drop from the 85 the previous year—continuing a downward trend for companies to report and fix material errors. That trend line would have extended into 2021 if not for an SEC accounting warning that triggered a boom in restatements for special purpose acquisition companies. Of the 409 restatements through late August, just 45 involved companies other than SPACs, according to Audit Analytics.

—With assistance from Nicola White.