Startup Electric Last Mile Solutions is struggling with challenges that include lack of an auditor and resignation of two top officials. Shown is an EV charging station at the Washington car show in January.
Photographer: Al Drago/Bloomberg

Add the extended lack of an auditor to its woes. The Troy, Mich.-based commercial vehicle maker has been looking for a new auditor for more than three and a half months—20 times the average length it takes a company to replace an auditor, according to research firm Audit Analytics.

The company has gone the longest auditor-less stretch of any public company so far this year, and the second-longest of any company in the past four years, according to the research firm’s data. Medical device maker MiMedx Group Inc., whose former CEO and COO were convicted on accounting fraud charges in 2020, went almost six months without an auditor from 2018 to 2019.

The large majority of companies—75% over the past 10 years—name a new auditor the same day they announce the departure of an old one, the data show. ELMS’s position is unusual, but the electric vehicle maker’s split with BDO was unusual in other ways, too. BDO quit on Feb. 8 after less than a year on the job, saying it was stepping down because the vehicle maker failed to remediate “potential illegal acts” within the company.

This kind of public auditor callout of a client is rare. Rarer still was the company’s reaction to it. Electric Last Mile not only disavowed BDO’s claims but also shot back at the firm, raising questions about the auditor’s independence, according to a securities filing the company issued when BDO resigned. 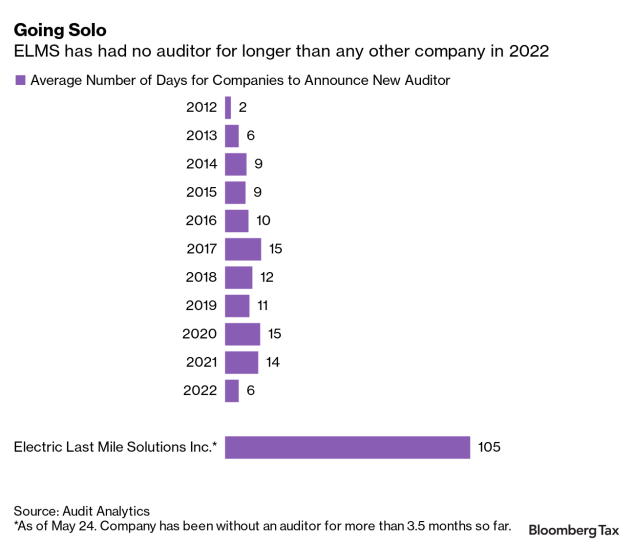 The company charged that it was BDO’s tax advisory group that helped create and structure share purchase transactions that ultimately led to co-founder Jason Luo’s and former CEO James Taylor’s resignations. Under post-Enron securities laws, auditors cannot perform certain consulting services for the same companies whose books they vet, including designing what could be considered aggressive tax strategies.

BDO and other large accounting firms face intensifying pressure from the Securities and Exchange Commission as the regulator has warned repeatedly that their growing book of consulting work threatens to undermine their objectivity. They could face heightened fines for ethics lapses.

BDO rebutted the company’s claims in a March 1 letter, saying it didn’t help create and structure the transactions and it didn’t know the facts or circumstances that resulted in the resignations of the executives because the company “failed to provide BDO with access to any information relating to the investigation or the outcome thereof.”

“It’s rare that you see the battle, the fight, the spat play out in public,” said Jeffrey Johanns, associate professor of accounting at the University of Texas McCombs School of Business.“That means the relationship has gone really, really south.”

Electric Last Mile declined to comment. BDO said it doesn’t comment on client-related matters, including those related to former clients.

A Litany of Problems

ELMS, which went public in a June 2021 special purpose acquisition company, or SPAC, merger, disclosed in March that the SEC had opened an investigation. ELMS also cut 24% of its workforce and pulled its guidance for the remainder of 2022.

The company faces several financial reporting challenges, including a long-past deadline to file its annual 10-K, a delay in filing its first-quarter 10-Q, and the need to redo, or restate, at least two quarters of past financial statements. It has until May 31 to submit a plan to Nasdaq outlining how it will regain compliance with its listing rules, the company said Tuesday.

ELMS is one of several electric vehicle-related companies that went public via SPAC that are fighting for survival. Faraday Future Intelligent Electric Inc., Canoo Inc., and Lordstown Motors Corp. are all under SEC investigation while also dealing with their own respective cash crunches.

As of March 10, ELMS had approximately $95 million in cash and cash equivalents, including approximately $24 million in restricted cash. The company said at the time it believed it had sufficient cash to continue operations through sometime between July and September 2022.

—With assistance from Amanda Iacone.