A drop in estimated tax payments and pullback in income tax withholding could be a harbinger of economic distress.
Photographer: Daniel Acker/Bloomberg via Getty Images

The share of American workers’ wages going to state and local tax coffers through withholding and estimated tax payments began to soften this spring, in yet another sign of a slowing US economy.

States like California, Illinois, Michigan, and New Jersey saw steep declines in estimated tax payments due to stock market volatility and economic uncertainty, according to a recent analysis by the Urban-Brookings Tax Policy Center. Inflation-adjusted withholdings were largely flat in states like Minnesota, Connecticut, and Maryland in the same period. Taken together, the two income tax components can often be an early signal to economists of what to expect when it comes to future income tax revenue.

“If we are in a recession or not, the data shows that things are not as strong as they were and that is a growing, troubling sign of weaknesses,” said Lucy Dadayan, a senior research associate at the Tax Policy Center and author of the analysis.

Growth in state tax withholding weakened substantially year-over-year, at 0.8% in the combined months of April and May 2022, while estimated tax payments due on April 15 declined 6.7% during the same period, according to the analysis.

There are already signs that recessionary fears, coupled with giant stock market losses, are having an impact on state budgets. This week the California Legislative Analyst’s Office said state tax revenue could be $5 billion less than previously expected. In New York, budget officials expect revenue from the state’s primary source of revenue—personal income tax—to decline by $3.1 billion in fiscal 2024 amid concerns over a slowing economy. 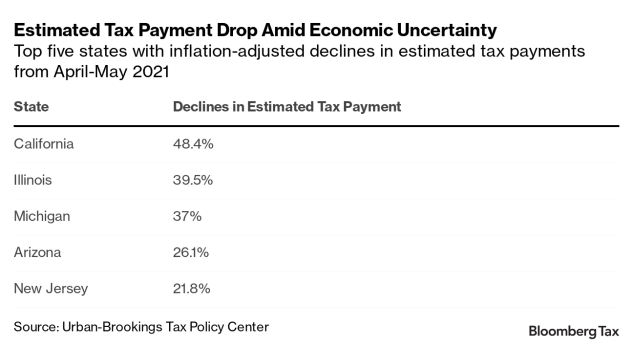 “Withholdings are an indirect reflection of the well-being of the households that are making those payments,” said David Wilcox, a senior fellow at the Peterson Institute for International Economics and director of US economic research at Bloomberg Economics. “When productivity growth is high and wages are growing more rapidly than prices, you’ll tend to see withholdings increasing even in inflation-adjusted terms and that’s a sign that the economy is healthy.”

Economists say the early data points to the fact that employees’ wage growth has struggled to keep up with record-high inflation that hit 9.1% in June and signs that the labor market is softening.

“While wages are rising, they’re not rising as rapidly as prices and so therefore withholding is soft in real terms, and withholding after adjustment for prices reflect the fact that incomes are being squeezed by inflation,” Wilcox said.

An estimated 34 million US consumers, or roughly 13%, spent more than they earned in the past six months, underscoring how Americans are having difficulty managing their finances amid decades-high inflation, according to a June survey by LendingClub Corp. and industry publication Pymnts.com released on Monday.

“The reality is over the last 20 years income has not dramatically increased, but all of the expenses have gone up,” said Anuj Nayar, LendingClub’s financial health officer, in an interview.

On Friday, US job growth soared unexpectedly with employers adding more than double the jobs in July than forecast, illustrating solid labor demand that tempers recession fears and suggests the Federal Reserve will press on with steep interest-rate hikes to thwart inflation. Wage growth also surprised to the upside, while the labor force participation rate eased.

Budget officers have been carefully monitoring such economic indicators because any rise in local jobless rates would impact state and local governments’ ability to meet the needs of their taxpayers.

States have already seen a decline in sales tax collections as consumers adjust their spending habits because of rising costs. Twenty-six states—Maryland, Connecticut, Massachusetts, and Iowa among them—saw lower sales tax revenue in April from a year earlier, after adjustments for inflation. Sixteen others reported slower growth compared with a year earlier.

At the annual National Conference of State Legislatures meeting in Colorado on Monday, officials from Oregon to Missouri to New Hampshire expressed concerns about the impact on state budgets of an any erosion of their tax base even in the event of a mild recession.

“I spend a lot of time thinking about revenue,” said Oregon state Sen. Elizabeth Steiner Hayward, who co-chairs the budget committee. “Predicting our state’s revenue has proven challenging at best over a biennial cycle and we tend to underestimate, but I’m really worried about how do you even think about it in this kind of market, in this kind of economy?”

Nick Sly, an economist at the Federal Reserve Bank of Kansas City, said states would likely see growth slow in the coming fiscal year as they move closer to historical trends. But he warned budget officers to pay attention to how much households and businesses are willing to spend versus the risks to real growth.

“If you don’t see inflation start to come down over the latter part of the year and you see more aggressive types of tightening being necessary to restore price stability than in the short term, that can be a headwind,” said Sly, speaking at the same conference. “If you see financial markets tighten because of some of the global risks that start to manifest in the United States, that can slow growth a little bit quicker.”

To contact the reporter on this story: in New York at dborak@bloombergindustry.com