States that shunned so-called sin businesses like marijuana and sports betting not long ago are quickly joining the trend to tax those industries as lawmakers grope to close deficits that have grown during the pandemic.

Thirteen states, including New York and California, are slated to take up legalization of sports betting soon. New York is also among seven states—along with Connecticut, Pennsylvania, Maryland, Virginia, New Mexico, and Texas—that already have introduced bills to legalize recreational marijuana, or have governors who have called for legislation ahead of upcoming sessions. There’s even momentum in Southern states, including Texas, Florida, and Alabama, to move forward with legalization.

The pandemic’s effect on state budgets is expected to speed up the timeline to launch these taxes. As of November, state tax revenues were down 3.2% from a year ago, according to the Tax Policy Center. Between six and 14 states are projected to take their first bets this year because of the rush to stop financial bleeding, according to VIXIO Gambling Compliance.Marijuana is in a similar situation, based on interviews by Bloomberg Tax.

“We certainty expect there to be more appetite for legalizing adult-use cannabis across the state legislatures this year, and for lawmakers to move faster,” Morgan Fox, a spokesperson for the National Cannabis Industry Association, said.

Officials in some states that haven’t chosen to extract such taxes are looking on enviously. Legal sports betting is booming, generating $129 million in taxes across the 15 states to report data since NBA basketball resumed in July, and wagers reached all-time highs in October, November, and December.

Six more states, including Virginia and Maryland, are set to join in 2021, as they finalize marketplace and tax details for measures approved in 2020. Lawmakers in the rest of the country, many of whom have tried and failed with proposals since the Supreme Court struck down a federal ban nearly three years ago, may finally find the perfect climate for support in 2021. 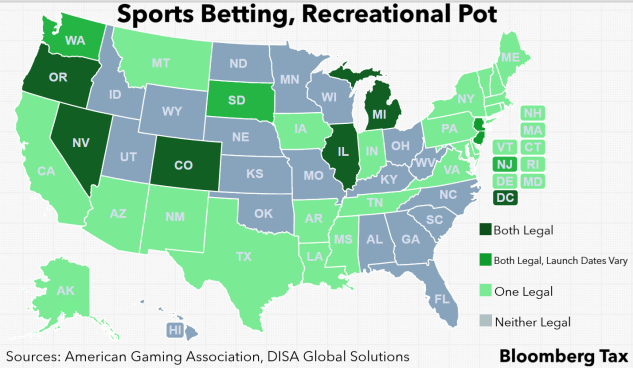 Cannabis is also looking more attractive to tax-hungry governments. The 11 states that have legalized sales of recreational marijuana for adults since 2012 brought in $297 million in tax revenue from January to October, according to data compiled by the Marijuana Policy Project. At least five more states will join in 2021, as New Jersey, Arizona, and others that passed legalization measures in 2020 finalize sales structures.

New Jersey, which has been taxing legal online bets since 2018, made nearly $6 million more off sports betting taxes in October than New York, which confines sports betting to in-person casinos—all of which remained closed between mid-March and September as the pandemic raged.

Now the largest market in the country, New Jersey is on pace to collect over $1 billion worth of bets in a single month by early February.

New York state Sen. Joseph Addabbo Jr. (D) told Bloomberg Tax he hoped to pass mobile sports betting as part of a revenue package in April. A summary of his bill, introduced Jan. 7, says it would produce around $79 million a year.

New York Gov. Andrew Cuomo (D) once called marijuana a “gateway drug”and lamented that the road to mobile sports betting would be too difficult because it would require a constitutional amendment. In a reversal, Cuomo unveiled plans this month to legalize and tax both pot and betting ahead of his annual State of the State speech.

The pandemic’s impact on New York’s budget is causing lawmakers who once turned their noses up at similar proposals from Addabbo to now reconsider, the lawmaker said. “We don’t want to go back to our districts and talk about deep cuts to education or deep cuts to health care during a pandemic,” Addabbo said.

Legalizing recreational use could provide the state with as much as $200 million in annual tax revenue, according to a report from the Commonwealth Foundation, a conservative-leaning Pennsylvania policy group.

Sin Taxes in the South

Not a single state in the South has legalized recreational marijuana, but Texas would become the first if any of 20-plus pre-filed bills picks up traction in the 2021 legislative session.

If Texas taxed marijuana at the same 15% rate as Colorado—the first state to legalize for recreational use—it would add more than $500 million in annual tax revenue and potentially add as many as 40,000 new jobs, according to an economic analysis from Vicente Sederberg LLP, a cannabis-focused national law firm.

And in Florida, Sen. Jeff Brandes (R) is once again pushing to legalize sports betting. His bill would tax revenue from wagers at a 15% “middle-of-the-pack rate,” directing the state’s cut to Florida’s education trust fund.

“There is a need for additional revenue as we face budget holes over the next two to three years,” Brandes said. Once Florida legalizes betting “many other states will jump on board,” Brandes told Bloomberg Tax.

In Alabama, the effort to legalize sports betting foundered—not from lawmakers’ opposition, but when a legislative session was cut short by the pandemic. Legal sports betting would bring at least $10 million in annual tax revenue to the state, according to a December study commissioned by Republican Gov. Kay Ivey’s Study Group on Gambling Policy.