The looming expiration of a Small Business Administration policy encouraging the deferral of pre-pandemic loan payments could trigger a wave of defaults and bankruptcies.
Photographer: Nina Westervelt/Bloomberg

As the owner of Bane, the biggest haunted-house attraction in New York City, Jennifer Condron knows her way around scary situations. Except what to do about her bank loan.

Condron’s BulletProof Productions LLC got a $350,000 loan backed by the U.S. Small Business Administration in 2019, before the Covid-19 pandemic shut down entertainment venues and dried up their revenue. Under the extraordinary circumstances, the agency issued guidance in early March 2020 that encouraged lenders participating in its 7(a) program to allow deferred payments for six months and beyond.

But the latest extension of that policy, one of the last remaining forms of pandemic relief for businesses, expires at the end of September. Borrowers without the means to pay back the loans because of the pandemic, such as those that relied on foot traffic from people working in offices, will have few options to stop lenders from demanding payments, small-business attorneys say.

Condron’s bank has already tried taking her to court, which in turn caused her to be rejected by a federal pandemic-relief fund for shuttered entertainment venues. She already exhausted both a Paycheck Protection Program (PPP) loan and a Economic Injury Disaster Loan (EIDL). Now, her hopes hinge on winning an appeal for the entertainment venue grant before she has to declare bankruptcy.

More defaults and bankruptcies are likely unless the agency—or Congress—steps in.

“I paid every single bill, every single monthly statement, on time,” Condron said of her financial situation before the pandemic. “It’s not like I don’t pay my bills, I’ve always had stellar business and personal credit. Now, I have no credit.”

The SBA’s 7(a) program provides government-guaranteed loans for small businesses that otherwise can’t get loans from banks because of thin credit files or other risk factors.

Before the pandemic, it was the agency’s most-popular program. Since fiscal year 2008, it has approved about 730,000 loans worth more than $270 billion. Typically, an owner will put up valuable personal assets as collateral in the form of vehicles or real estate—or in the case of a haunted house, lighting, cameras, and sound equipment.

A lender will then approve the loan, set repayment terms, and disburse the money.

The program, which has a maximum lending amount of $5 million, is popular because it is the last channel of major financing for many small businesses before predatory lenders. For Condron, the option was attractive as she sought to build on the more than $1 million in annual revenue her business generated before she received the loan. 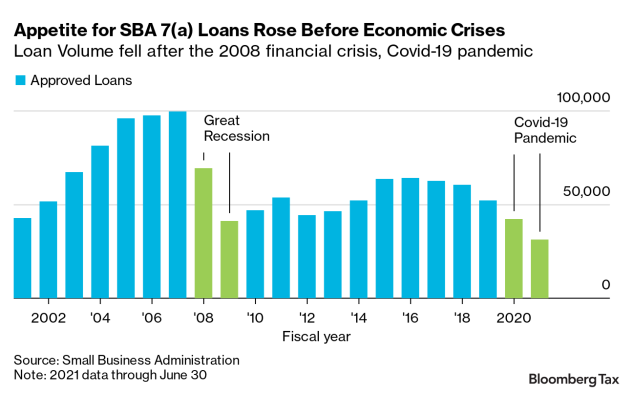 But when a borrower can’t pay back the loan, the lender has to sue in order to trigger the government guarantee, which is up to 75% for loans larger than $150,000. That often means seizing business and personal assets the borrower put up as collateral.

Throughout the pandemic, the agency has been paying lenders principal, interest, and any associated fees on the loans that borrowers owe so they wouldn’t take too much of a hit from missed payments.

The deferment policy, as well as other relief programs offered through the SBA like the PPP, EIDL, Shuttered Venues Operators Grant, and Restaurant Revitalization Fund, has staved off a wave of defaults.

All programs but EIDL have expired, and without an updated policy in place, “we are going to see some lenders moving to enforce these loans that are delinquent,” said Davis Senseman, attorney and founder of Minnesota-based small business advocacy law firm Davis Law Office said.

Jason Milleisen, owner and operator of Distressed Loan Advisors, who consults for small businesses with defaulted SBA loans, said delinquencies and defaults will likely come in November or December.

The government is “not making special concessions due to Covid,” he said. “They’re still looking at it the way that they always have, which is: The amount of the settlement should be directly related to the financial wherewithal of the individual guarantors, regardless of why they closed.” 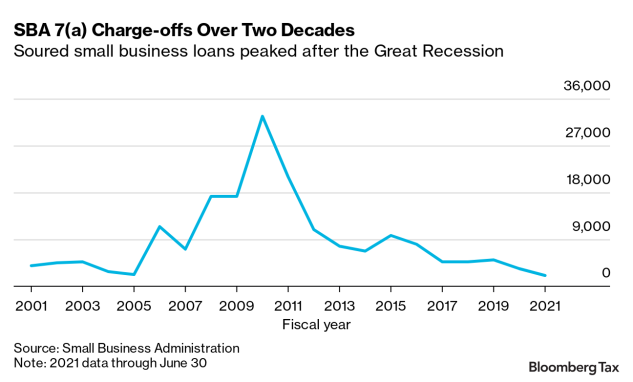 The SBA, in a statement to Bloomberg Tax, said it doesn’t foresee any wave of defaults. It said “there are currently no specific changes charted” for its deferment policy for its regular business loan programs.

“Although defaults over the last 12 months have been historically low due to the CARES 1112 payments and other government aid, at this time we see no indication of an upcoming decline in the portfolio’s performance,” the agency said.

But the agency’s visibility into these loans is minimal, said Ethan Smith, co-founder and managing partner of SBA-focused law firm Starfield & Smith, which represents some of the biggest SBA lenders.

While lenders are required to update the SBA on the status of each loan every month, it is on the most basic of terms. The agency doesn’t know if a loan is in trouble until an advanced stage.

Charge-offs, a term bankers use to signify loans that are unlikely to be paid back, peaked for 7(a) loans in 2010. In the first three quarters of fiscal 2021, lenders charged off about 2,100 loans, compared with almost 2,700 loans during the same period of fiscal 2020, agency data shows. Defaults usually follow charge-offs, and while it is currently on a downward trend, it takes time to kick up again.

Tony Wilkinson, president and CEO of a Texas-based trade group that represents government-guaranteed lending institutions, said it is too early to tell whether defaults on 7(a) loans will spike like they did in the wake of the 2008 financial crisis.

To avoid mass defaults, the agency could coordinate with Congress to codify, clarify, and close any loopholes—like encouragement to extend deferred payments beyond the expiration date—for lenders to sue in the SBA’s deferment policy, said Didier Trinh, director of policy and political impact at Main Street Alliance, a small-business advocacy group.

“While obviously, programs were were stood up quickly in an emergency emergency situation during COVID, it’s absolutely critical that that the language be written with the correct legislative intent, so that SBA can implement the law the way it was intended,” he said, referring to the deferred payment policy written into the March 2020 relief law.

Because real estate prices are so high right now, business owners that put up homes as collateral may be able to take equity out of their homes to pay off some loans, Milleisen said, noting the difference in real estate prices from the 2008 crisis to the pandemic. On the flip side, banks may not be willing to negotiate better settlements if that is an available option, he said.

Lenders also may be willing to extend the loan terms, or temporarily accept interest-only payments, but when a bank begins negotiations, it is only delaying the inevitable.

“A borrower who’s in distress is likely to default on this restructuring just as easily as they defaulted the first time around, and they just don’t have the resources to be basically re-underwriting these loans,” Milleisen said.

Declaring bankruptcy could be a way for some businesses to retain assets, but proceedings could drag on for years.

Condron’s lender, Florida-based First Home Bank, eventually dropped its suit “in the regular course of business,” according to a bank spokesperson.

But Condron is still seriously considering bankruptcy if her last option, the shuttered venues grant, falls through. Her initial application was denied, but she appealed when the bank dropped its suit—negating why she was disqualified from the beginning.

Condron isn’t opening this Halloween season. At best, she said, it might make Christmas if the grant comes through. For now, she is moving out five floors full of stuff accumulated over a decade to set up somewhere else.

“I just don’t want to file for bankruptcy,” Condron said. “I’ve been doing this for 11 years, I can’t just give up my life like that.”

To contact the editors responsible for this story: at bkohn@bloomberglaw.com; at pambrosio@bloombergtax.com