The Robinhood website on a laptop computer arranged in Hastings-On-Hudson, N.Y., on Jan. 29, 2021.
Photographer: Tiffany Hagler-Geard/Bloomberg

Novice stock market traders who won big on market highs in 2020 will have to confess their gains to the IRS in the next few months.

With filing season opening Friday, so-called retail traders will face scores of detailed form pages and certifications that they withheld enough taxes on any gains and obeyed the rules professional traders follow. Tax professionals have been preparing all year for the wave of retail traders likely to need help this tax season from trades made by popular commission-free apps like Robinhood.

There’s reason to believe many retail traders will need extra help this year. Almost a quarter of all stock market trades in 2020 were made by retail traders, up 55% from a year earlier, according to a recent Bloomberg Intelligence analysis. That means a lot of people new to trading may be hit with unexpected tax bills or worse: costly audits from the IRS. 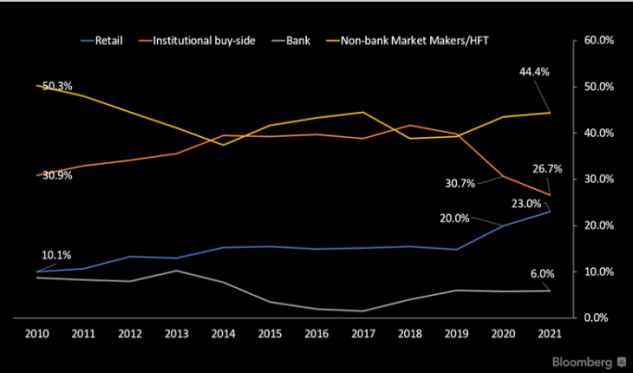 “Anything that is gain or that you’re happy about, there’s probably a tax consequence,” Mark Steber, chief tax information officer at Jackson Hewitt Tax Service, said. “And the more of those you have, the bigger the tax consequence, often with a surprise.”

Just because trading is easy—and perhaps exciting—doesn’t mean it’s invisible to the IRS. And tax preparers have tips.

“First, it’s helping consumers understand what they’ve done, and what the tax implications are, because it’s a bit confusing for the average consumer of what’s taxable and what isn’t, and how it’s treated,” said Andy Phillips, director of agency and industry relations and tax law and policy analysis at The Tax Institute at H&R Block.

Then, Phillips and other tax preparers said, is understanding what’s next. If there’s an unexpected bill, there are options offered by the IRS to pay off the debt—and avoid it next time.

Retail traders can expect to receive 1099 forms either separately or in a consolidated document from their stock broker that detail the tax obligations from the trades made during the year. If people haven’t gotten those forms yet, they should wait to file returns, Steber said.

That’s largely because the IRS is also receiving a copy of 1099s, and if there’s any discrepancy between a person’s return and what’s been reported by the broker, the agency will flag that account for investigation.

If a taxpayer underreports wages, they can incur penalties that can grow until they’re paid. Ignoring the IRS, for whatever reason, could result in massive fines, Phillips said.

While many retail traders probably should have sought help before entering the buzzy world of no-commission trade, it’s not too late, Phillips added.

“Becoming a more active investor is a life change,” Phillips said. “And when you’ve got a life change, you’ve usually got a tax impact,” he added and urged first-time traders to talk to a professional to understand why there are taxes owed, and then come up with a plan to mitigate next year’s taxes.

A taxpayer could offset capital gains taxes by simply setting aside some money to pay the tax little by little, or withhold more taxes through an employer. The point, Phillips said, is to have a plan.

It’s also important to know what certain rules are to use them right. For example, traders can claim a deduction for trading losses up to $3,000 in a year.

Where things get tricky is when someone tries to use the deduction and is buying and selling stocks across multiple brokerage firms—in this case, apps—Sandi Bragar, managing director and partner at wealth management firm Aspiriant, said. They could run into major roadblocks like the IRS’ “wash sale” rule, which prohibits the sale of a stock to use the loss deduction, only to purchase the same stock, or similar, within 30 days.

“If people are going in and out of names quickly, and they’re generating losses and have offsetting positions, they’ve generated those losses within 30 days of a purchase, those losses get suspended,” Bragar said.

Fortunately, she said, brokerage firms should be capturing that kind of activity. But when that’s across multiple brokers, it could be a red flag to the IRS should the trades not be reported correctly, Bragar added.

H&R Block’s Phillips said anyone caught with a surprise tax bill should consult a pro, even if that’s just the FAQs embedded in automated software. If that’s not enough, real people are available to help, even in a global pandemic.

“For folks who are uncomfortable working in person, but they do need help, there are options available,” Phillips said. “Don’t bypass help this year just because you don’t want to do it in person.”