Upcoming OECD talks in coming weeks between more than 100 governments will build on the outlines of a global corporate tax deal earlier this month by the G-7.
Photographer: Eric Piermont/AFP/Getty Images

The world’s richest nations have set the stage for a revolution in corporate taxation, but they still have their work cut out to actually achieve that overhaul.

Talks in coming weeks between more than 100 governments before a Group of 20 meeting in July will build on the outlines of a deal earlier this month by Group of Seven finance ministers.

Despite their breakthroughs on a minimum global corporate tax rate and a shift in philosophy allowing one country to apply levies to profits of another’s national champions, multiple technical details remain unresolved. 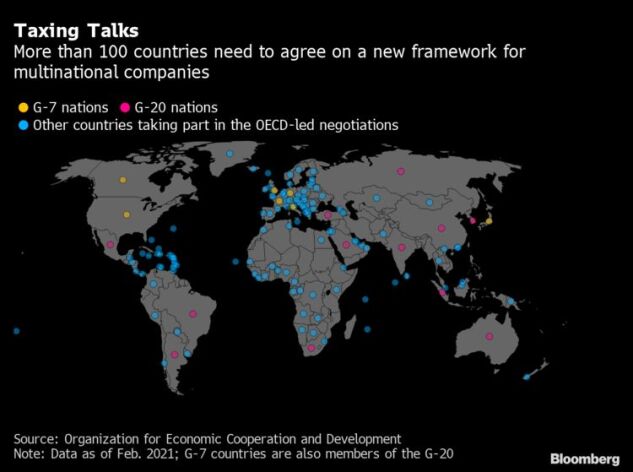 Agreeing which companies will be covered, and deciding how governments can still use tax incentives to encourage virtuous economic activity despite a minimum rate, are among several other challenges that have overshadowed years of talks hosted by the Organization for Economic Cooperation and Development.

Implementation of any accord may take years, requiring treaty amendments and domestic legislation, and concerns over whether it can stick could yet hamper a deal too.

“It’s a month already that we’ve had little sleep,” , the official running the OECD talks, told French television on June 14. “The next two weeks will be very important.”

In a sign of momentum toward a deal, French Finance Minister is poised to hold talks with several counterparts to overcome any potential opposition.

“We will multiply diplomatic contacts in the coming days to convince our Indian, Chinese and Russian partners to join this international consensus,” he told reporters in Luxembourg on Thursday.

The G-7 accord agreed principles on transferring some profits from companies’ home countries for taxation in nations where they make sales. But deciding exactly which corporations to include -- those said to be “in scope” -- is still a challenge.

A Biden administration proposal in April would use revenue and profitability measures to limit the list to about 100. That defused conflict over more qualitative criteria, or singling out tech companies, but countries still need to reach a final agreement on the thresholds determining which companies should qualify.

The Intergovernmental Group of 24 developing countries, which includes Brazil, India, and South Africa, wants the scope to gradually broaden to include more than 100 companies, according to a policy note it sent to other governments last month.

Nations must also decide how much tax revenue to share after the G-7 agreed to reallocate “at least 20%” of profits above a 10% margin. Developing economies want the biggest possible wedge of tax income from multinationals operating in their territories.

Negotiators are also revisiting controversial qualitative criteria to keep low-margin in scope by separating out its profitable business lines. Companies have complained such segmentation can be overly complex, particularly if they do their own financial reporting differently.

If financial services are excluded from a deal as expected, that poses another challenge since drawing a clear line between them and tech companies is getting harder.

The so-called second pillar of the talks would create a global corporate minimum tax, an opportunity to boost government revenues that is a priority for the U.S., with broader backing elsewhere. The OECD estimates an extra $150 billion a year could be generated from tougher U.S. rules on foreign income and a 15% global minimum rate.

That will be a hard sell for Ireland, whose corporate rate is 12.5%. In addition, some countries including China want exclusions in the rules that allow them to attract high-tech investment with tax incentives.

“Minimum tax is devolving part of tax sovereignty and how you maintain incentives over a particular kind of foreign investment,” said David Linke, Global Head of Tax & Legal at KPMG. “That’s a difficult issue.”

An OECD deal could eradicate a host of levies on mainly American tech firms that countries enacted unilaterally in recent years and which prompted U.S. threats of retaliation.

To restore trust, negotiators must agree on which measures will be rolled back and when. Countries aren’t keen to abolish such taxes until they’re receiving extra revenues from the OECD deal, and getting developing economies on board may be particularly challenging since they won’t gain much in the process.

“Every country will have to weigh the cost and benefit,” said Marilou Uy, director of the Group of 24. “In particular because it will be asked to forego unilateral tax measures.”

Implementing new rules agreed at G-20 meetings in July or October will require many changes to treaties and domestic laws.

That is thorny for the European Union, where directives on tax changes throughout the bloc require unanimity, and several countries may object to such legislation enforcing a OECD deal. Aside from Ireland’s reservations on a 15% minimum tax, Hungarian Prime Minister called that plan “absurd.”

The U.S. will face challenges too, since a deal may need legislation in Congress, and treaty changes in the Senate that require a two-thirds majority.

“I don’t want the OECD to react to what we do but not do it in unison,” said , the Democrat who chairs the House Ways and Means Committee. “Then all of a sudden we are out with a rate that perhaps they can undercut.”

“Higher U.S. tax rates instituted before other countries move poses the risk of others not following through,” , the top Republican on the Senate Finance Committee, told Yellen on Wednesday. “Congress needs to understand the analysis behind your proposals, and whether any agreement would allow foreign targeting of U.S. companies or special carve-outs for particular jurisdictions, including China.”

To contact the reporters on this story:
in Arlington at igottlieb1@bloomberg.net;
in Paris at whorobin@bloomberg.net