Walmart Stores Inc. is among the big retailers supporting new online reporting duties to crack down on organized theft. Shown is a Walmart store in Albany, N.Y., on Feb. 17.
Photographer: Angus Mordant/ Bloomberg

A growing number of states are deputizing e-commerce marketplaces to crack down on criminal rings selling stolen and counterfeit merchandise online, an escalating fraud that eats holes in retailers’ pockets and robs the states of billions in tax revenue.

More than a dozen states debated bills this year that layer new data collection duties on marketplaces such as Amazon.com Inc., eBay Inc., and Etsy Inc., and give law enforcement agencies new tools to use the data to police thousands of e-commerce sellers. Colorado and Ohio enacted these marketplace oversight laws in March, and lawmakers in Alabama, Georgia, and Illinois approved nearly identical measures in the last three weeks.

While a criminal justice theme runs through the new state laws, the measures also address a tax gap that has opened as “organized retail crime” has exploded. The Retail Industry Leaders Association (RILA), which represents large retailers including Best Buy Co. Inc., HomeDepot Inc., and Target Corp., recently pegged the federal and state business tax losses at $15 billion annually. That number is billions higher when state and local sales tax losses are added because stolen items are often untaxed or undervalued when fenced online.

“Tax concerns aren’t motivating these bills,” said Richard Cram, director of a Multistate Tax Commission program addressing sales tax compliance. “But of course, a tax gap emerges where you have merchandise that is being purposely underpriced, so you don’t get the full tax value for those goods.” 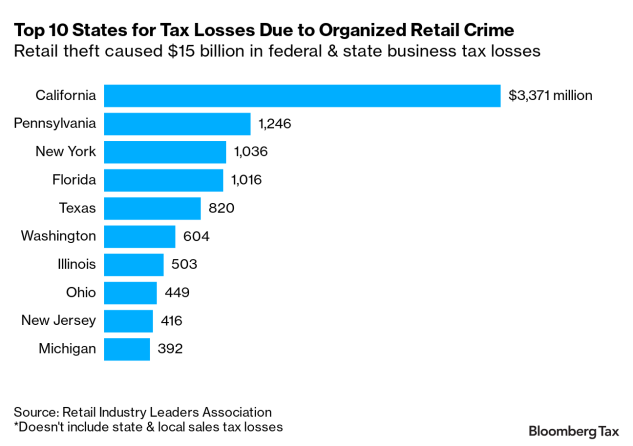 Retailers and law enforcement officials describe the new laws as a line of defense against teams of professional burglars, shoplifters, and fencing agents. These criminal syndicates annually loot more than $70 billion worth of products from brick-and-mortar stores and traffic the stolen goods from e-commerce platforms, according to RILA.

“Organized retail crime is committed by sophisticated criminal enterprises that harm our communities in ways that extend beyond lost revenue and stolen products,” Illinois Attorney General Kwame Raoul said shortly after his legislature passed a retail theft bill April 9. “These complex operations rely on theft and resale of stolen products to fund and perpetuate the cycle of violence through even more dangerous illegal activities like trafficking drugs and firearms.”

E-commerce has facilitated retail theft in recent years, offering crooks anonymity and efficiency as they fence stolen goods. A report by RILA and the Buy Safe America Coalition pointed to a strong relationship between theft and e-commerce, finding that 61% of the recent surge in shoplifting is attributable to growth in online shopping.

Thieves frequently target luxury items such as designer clothing and handbags, but household staples including laundry detergent, deodorant and razors are on the top-10 list of products trafficked by crime rings, according to the National Retail Federation.

The RILA/Buy Safe report pegged losses due to retail theft at $68.9 billion, or 1.5% of total retail sales, for 2019. While more recent numbers are unavailable, retailers and law enforcement agencies believe the losses grew during the Covid-19 pandemic as consumers shifted to online shopping and thieves ramped up smash-and-grab tactics, said Jason Brewer, RILA’s executive vice president for state government affairs.

“This was growing rather problematically before Covid, but it grew exponentially during Covid,” he said.

Retailers called on Congress and state legislatures to pass laws preventing thieves from shielding their identities when selling goods over marketplaces, Brewer said.

At the federal level, both the Senate and the House last year introduced versions of the INFORM Consumers Act, requiring marketplaces to verify the identity of high-volume sellers. The House version of the bill, H.R. 5502, passed in February.

Arkansas was the first state to act, passing S.B. 470 in April 2021. The campaign snowballed earlier this year after lawmakers in 29 states introduced more than 50 bills addressing retail theft. Many of those bills mirrored requirements found in H.R. 5502 and S.B. 470, said Lauren Doroghazi, vice president of the political consulting firm MultiState Associates.

These obligations are on top of the tax duties marketplaces were forced to adopt in the last three years. Following the U.S. Supreme Court’s landmark 2018 ruling in South Dakota v. Wayfair, every sales-tax state in the country has enacted laws requiring marketplaces to collect and remit taxes on sales by third-party retailers using their e-commerce platforms.

The specific data to be collected under the state laws include: bank account information; name of the payee if there is no bank account; contact information, including a valid email address and phone number; business tax identification number; and whether the seller conducts business on other online platforms.

The laws also grant new authorities to state and local law enforcement agencies to solicit the data from marketplaces and investigate instances of organized retail crime.

“We believe the seller disclosure and verification requirements within the legislation are best practices for all marketplaces and are needed to empower consumers and law enforcement officials to reduce fraudulent sales,” Ryan Irsik, Walmart’s director of state and local government relations, wrote in a March 15 letter to the Kansas Legislature.

The federal legislation and state laws also have support from the Coalition to Protect America’s Small Sellers, which includes the marketplaces eBay, Etsy, Mercari, OfferUp and Poshmark. The coalition recently called H.R. 5502 “a thoughtful and balanced policy.”

Amazon, however, has expressed doubts about some of the requirements in the emerging federal and state strategies, writing “the real purpose of these measures is to favor large brick-and-mortar retailers at the expense of small businesses that sell online.” The company said it also favors a federal approach similar to H.R. 5502 rather than “an unworkable patchwork of state-level regulations.”