Whether or not President Joe Biden succeeds in working with Congress to enact his Social Security reform proposals, it’s clear that the impending depletion of the program’s trust fund must be addressed in the next decade. Although difficult choices about tax increases and benefit cuts can’t be avoided, the pressure on Social Security’s finances can be lessened by taking a hard look at policies that punish work at older ages—doing so would help to facilitate longer working lives.

One such policy is the Social Security earnings test, a provision that reduces benefits for younger Social Security recipients who continue to work. The earnings test doesn’t really punish work in the same way as a tax, as foregone benefits are gradually repaid over time. However, the provision is complicated and poorly understood, and many people perceive it to be a tax, reducing their work effort in response. Eliminating the earnings test would improve the design of Social Security by removing a barrier to work for older individuals. 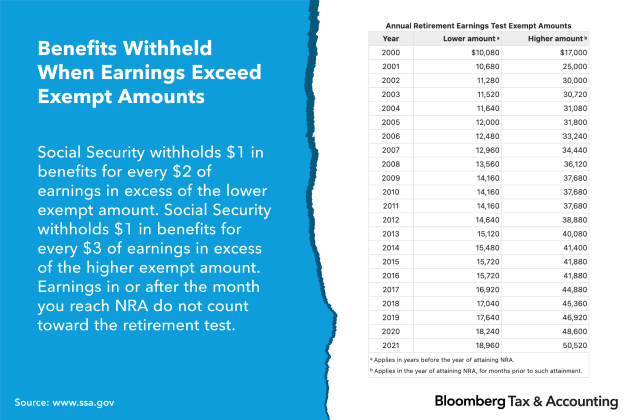 But many Social Security beneficiaries don’t understand the earnings test. For example, in a survey that two coauthors and I recently conducted, only about a third of respondents in the affected age range correctly believed that being hit by the earnings test now would increase their benefits down the road. Similarly, a survey by AARP suggests that while most people are aware that the earnings test reduces benefits prior to full retirement age, only 42% are aware that future benefits would be higher.

Given these misperceptions, it’s not surprising that people respond to the earnings test as though it were a tax on work—and reduce their labor supply. Taxes generally have both benefits and costs—they punish work, but they also raise revenue to fund government programs. In this case, however, the earnings test imposes a penalty on work without the benefit of raising revenue. Taxes on older workers are particularly harmful as some research suggests that older workers are more likely than younger workers to change their behavior in response to taxes.

One possible rationale for retaining the earnings test is that it encourages people to delay claiming. Individuals who believe that claiming before stopping work will result in lower benefits have an incentive to delay claiming as long as they are still working. Indeed, the elimination of the earnings test for individuals above full retirement age seems to have incentivized earlier claiming. That’s a concern because—as my research and research by others—has shown, many people claim benefits sub-optimally early.

However, a clunky, poorly understood provision that confuses people and discourages work—and also discourages early claiming as a side effect—is not the right way to combat this problem. A more sensible approach would be to take steps to directly reduce the problem of suboptimal claiming, while also eliminating the earnings test. (A recent Bipartisan Policy Center report recommends doing just that and makes specific proposals to address suboptimal claiming.)

The Social Security earnings test represents the worst of two worlds: It distorts economic incentives like a tax without raising revenue. It should be eliminated so that it no longer stands in the way of older people who want to continue working.

Sita Nataraj Slavov is a visiting scholar at the American Enterprise Institute, where she specializes in public finance and the economics of aging (including older people’s work and retirement decisions, Social Security, and tax policy). She is concurrently a professor of public policy at the Schar School of Policy and Government at George Mason University.