President Joe Biden's economic agenda is currently being negotiated in Congress, which is a tricky process even if Democrats decide to advance legislation on a partisan basis.
Photographer: Mark Wilson/Getty Images

President Joe Biden’s planned tax code overhaul to offset trillions in new spending wouldn’t necessarily have an easy path if the administration moves on from bipartisan negotiations and opts to advance legislation with only Democratic support.

Biden has offered to pursue a narrower infrastructure package of around $1 trillion, paid for by a 15% corporate minimum tax and a better funded, more-aggressive IRS. But with Congress soon returning from its week-long Memorial Day recess, pressure is ratcheting up for Democrats to move on their own if there isn’t a bipartisan breakthrough soon.

“I don’t think we should run the risk of not getting something done because the other side is not cooperating,” Rep. Jim Clyburn (D-S.C.) said June 3 during a Bloomberg Television interview.

Democratic leadership can try and move tax-and-spend legislation using the budget reconciliation process, which would bypass the normal 60-vote threshold to end a Senate filibuster but require that new permanent spending needs to be fully offset. With thin majorities in both chambers, they would need to thread a needle between liberal and moderate priorities, as well as regional and parochial interests that don’t necessarily fall along party lines.

Manchin has said he could see himself supporting a 25% corporate rate, up from the current 21% rate set by Republicans in the 2017 tax law.

While Manchin’s support would be necessary for moving tax legislation via reconciliation, a more modest rate hike risks the ire of the progressive wing of the party. Rep. Ro Khanna (D-Calif.), a member of the Congressional Progressive Caucus, said Friday that if Biden removes the 28% corporate rate from his infrastructure proposal, it still must be part of any future reconciliation bill.

Where the corporate rate lands would have a big effect on how much new spending Democrats could advance under reconciliation rules. The Tax Foundation, a Washington-based policy nonprofit, estimates that raising the corporate rate to 28% would bring in $954 billion in additional revenue over the next 10 years.

Another Biden proposal, to institute a minimum corporate income tax of 15%, would address a common complaint from progressives that Amazon and other large companies pay little-to-no corporate income tax under the current system. But that would likely mean a substantial tax hike for major employers in states like Washington, Delaware, and New Jersey, which could cause representatives and senators for those states to balk.

One of the biggest potential sticking points for a partisan infrastructure and social-spending push is actually a tax cut: Several Democratic lawmakers want to ease the $10,000 deduction cap for state and local tax payments.

Removing or raising the cap has support from Democrats in high-tax coastal areas like California, New York, and New Jersey, including Rep. Katie Porter (Calif.), a high-profile ally of Sen. Elizabeth Warren (Mass.) and a fledgling progressive icon.

The Biden administration didn’t include a SALT cap repeal in its plans, but a small coalition of coastal state Democrats could leverage the party’s thin majorities in the House and Senate for concessions. Full repeal would take a revenue chunk out of Biden’s spending plans, but even a partial increase in the cap could cause major in-fighting between Democrats representing areas that don’t use the deduction much versus those that do. 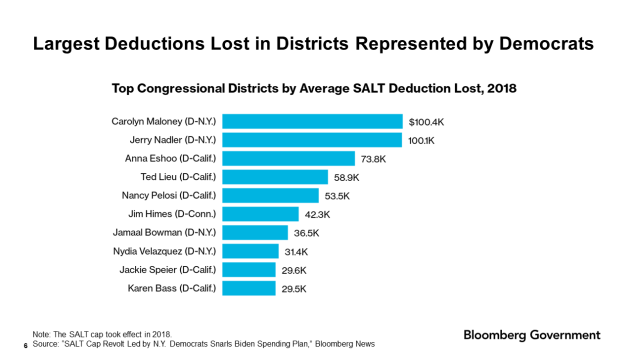 Including SALT cap relief also risks muddling popular messaging that Biden’s proposals are paid for by raising taxes on the wealthy and corporations, since reinstating the full deduction would primarily benefit the wealthiest households in America.

While calling a full repeal “a giveaway to the rich,” earlier this year, Rep. Alexandria Ocasio-Cortez (D-N.Y.) indicated there could be room to compromise on reinstating the SALT cap for individuals and families under a certain income threshold.

For more on the politics behind the SALT cap, download this BGOV OnPoint.

Biden is seeking several changes to how gains from stocks, bonds, real estate, and other assets are taxed as a revenue-raising centerpiece of his social spending plan.

While his plans would fulfill a longstanding goal of union allies and congressional Democrats who want to see capital and labor income taxed at a more equal level, they have been met with skepticism by several key Democrats.

“I’m not sure raising the capital gains taxes to the ordinary rates is the right answer,” Sen. Mark Warner (Va.) said in a recent interview. “There is a sweet spot where you can raise capital gains, still have a differential between capital gains and ordinary income, and still generate more revenue.”

Further complicating any overhaul is Biden’s proposal to treat death as a taxable event for gains, which is causing heartburn for some lawmakers, particularly those who represent constituents with high-priced rural real estate in California, Montana, and Georgia.

Even Rep. Mike Thompson (D-Calif.), a progressive ally of House Speaker Nancy Pelosi, whose district includes vineyards in Napa and Sonoma Valleys, has voiced concern over the idea.

Democrats expanded the Child Tax Credit on a temporary basis as part of a relief package earlier this year. The inclusion satisfied a longstanding goal of some Democrats, turning the typically annual benefit into a monthly cash payment to qualifying households, while also bumping up the annual amount those households are eligible for.

But the measure lasts only from July until the end of December, and its supporters have said they already want to push for permanence before the first payment has been made. The idea has support from many Democrats, including House Appropriations Chairwoman Rosa DeLauro (Conn.) and Sen. Michael Bennet (Colo.).

While Biden has advocated a temporary expansion until 2025, something Bennet has said publicly he believes to be the most likely outcome, progressives could attempt to hold out for a longer expansion. Many of the individual tax cuts in the 2017 tax law are also set to expire in 2025, creating major cliffs.

Biden has also called for eliminating a swath of tax benefits available to the oil, gas, and coal industries, including writedowns around depletion of wells and mines and for energy exploration.

Removing those fossil fuel breaks would help offset the cost of expanded clean energy incentives, reflecting a broad belief among Democrats in raising taxes on fossil fuel companies as part of a transition away from those energy sources. 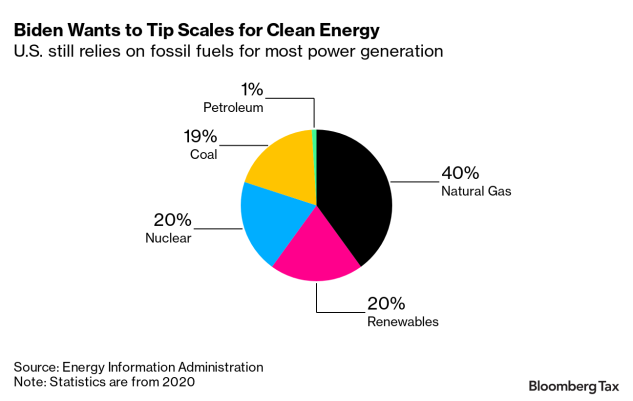 “You need unanimity to get these provisions passed,” Solomon, now a partner at Steptoe & Johnson LLP in Washington, said during a June 3 tax conference. “So we’ve really got to see how this plays out.”

—with assistance from Genevieve Douglas.

To contact the reporter on this story: in Washington at cwilhelm@bloombergtax.com