Congressional districts in Democratic states would get almost double the funding for surface transportation projects compared to those in Republican states under the House highway bill.

The $547 billion surface transportation measure (part of ) would send an average of $16.6 million per congressional district to states and territories with majority Democratic House delegations, while states with majority Republican delegations would receive an average of $8.9 million per district, according to a Bloomberg Government analysis of the earmarks in the latest version of the bill.

The legislation, slated for a vote this week, is the first with funding designated for specific projects to reach the House floor in a decade. The cash-per-district disparity reflects the partisan division over the virtue of such earmarks — and the geographic makeup of blue states. Democrats asked for far more money and projects, often in higher density areas.

This year’s process limited funds allocated to each member to no more than $20 million, and put other guardrails in place to deter the gamesmanship, corruption, and waste that gave the spending tool a bad name in the past. But the specter of partisanship underlines how earmarks could be wielded to influence voters ahead of an election, which analysts say has been particularly useful for Democrats in the past.

“We see much stronger evidence that earmarks help Democrats win re-election than we see for Republicans,” said Jeffrey Lazarus, a professor of political science at Georgia State University. “The whole reason earmarks exist is so that members can use them to shore up support among different elements of their base in their district.”

Highway, Water Plans Steam Forward: What to Watch This Week 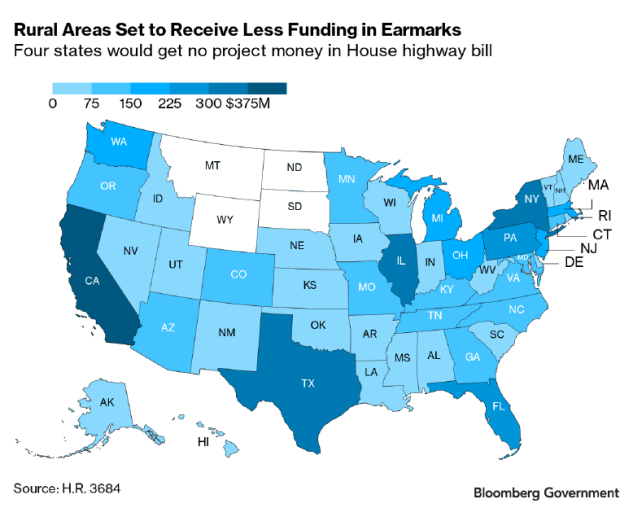 Lawmakers on both sides of the aisle secured funding for projects including added highway lanes and new bike paths, with Democrats requesting nearly three-quarters of the projects. Bloomberg Government’s analysis of average earmarks by district omits the three states — Michigan, Minnesota, and Pennsylvania — with equally split congressional delegations.

“If an earmarked project is truly worthy of taxpayer funding, then it should be proposed on the House floor or as a competitive grant,” said Rep. (R-N.C.), one of a dozen Republicans backing a long shot amendment to strip the earmarks from the bill.

Both the majority and minority committee staff were involved with the earmark process. DeFazio said he and the ranking member ensured that every member of the House had the same chance to secure as much as $20 million.

The reauthorization bill with earmarks is moving to the House floor just days after President Joe Biden secured a separate agreement with a bipartisan group of senators for a $579 billion infrastructure framework. In the Senate, leaders haven’t announced a process for handling earmarks in the highway bill, and two of the four panels with jurisdiction over it have advanced legislation without earmarks.

From Highways to Walkways

Nearly $4 billion of the bill’s $5.7 billion in earmarks would be designated for projects requested by Democrats, and $1.7 billion would be for Republican projects, according to the House Transportation and Infrastructure committee.

Members had to submit documentation with their requests, including letters of support, environmental review status, and certification that the lawmakers and their families don’t have financial interests in the project.

Only one project — a hub to better connect an airport and rail corridor in California — was given more than the $20 million limit, since two members requested funds for it, while 25 other projects received $20 million — predominantly for highway projects. 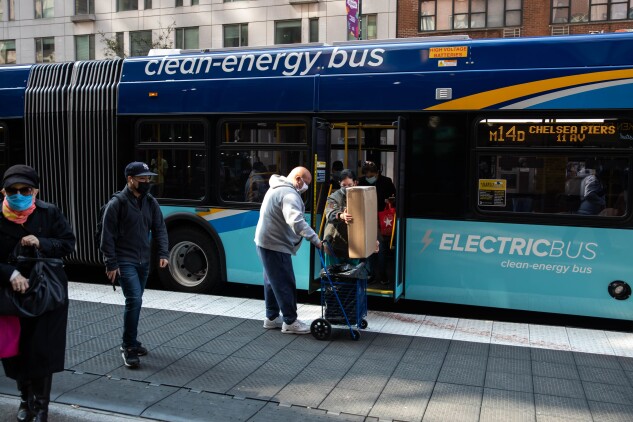 More than $1 billion of all projects included walking and biking infrastructure, according to the nonprofit Rails-to-Trails Conservancy, which wrote in a statement that the funds signal that “demand for significant investments in active transportation far exceeds what is provided by existing federal programs.”

“Never before has federal law so clearly recognized that active transportation is essential to the success of American communities,” said the group’s vice president of policy, Kevin Mills.

California, New York, and Texas would receive the most money overall. Four states’ lawmakers didn’t request, and wouldn’t receive, any earmark money: Montana, North Dakota, South Dakota, and Wyoming, each of which has a single Republican House member.

Democrats have touted the transparency of the new earmark process, which required members to post their requests online, but the bill lists projects without sponsoring members’ names. Sean Kennedy, director of policy and research at nonprofit Citizens Against Government Waste, said it was “pretty disappointing to see that they’re not even nailing that one area that’s pretty crucial to transparency.”

“I don’t know that it’s going to be too long until we see the sort of corrupt practices cropping back up,” he said.

In the past, earmarks have been used to cajole votes from across the aisle. However, the majority of Republicans on the House Transportation and Infrastructure Committee voted against the legislation despite having their projects in the bill, which could reflect the growing polarization among voters.

“As a Republican, it might be more valuable to never cooperate with the Democrats, than to sign on to a particular spending bill that might then open me up to criticism from my right when primary season runs around,” said Andrew Sidman, chair of the political science department at John Jay College of Criminal Justice at the City University of New York. “We’re now at a point in time where cooperating across the aisle can be more costly than not providing these kinds of benefits in certain areas.”

But the two Republicans who voted for the legislation in committee — (Puerto Rico) and (Pa.) — had several projects included in the bill.

Gonzalez-Colon, who received more than $17 million for three projects, touted her earmarks in a release after the bill was approved by the House transportation panel. Gonzalez-Colon and Fitzpatrick didn’t return requests to comment.

(Updates with additional analyst quotes in fifth and 23rd paragraphs.)