There has been growing bipartisan interest in increasing funding for the IRS, an agency that has had to deal with multiple pandemic relief laws that altered the tax code.
Photographer: Samuel Corum/Bloomberg

President Joe Biden is seeking more than $1 billion dollars in additional funding for the IRS—showing his administration is serious about getting the agency the resources it needs to audit more wealthy individuals and large corporations.

The proposed $13.2 billion baseline budget for fiscal year 2022 would be a $1.2 billion, or 10.4%, increase over the 2021 enacted level, the administration said in its funding request released Friday. The IRS would also get an additional increase of $417 million for tax enforcement as part of a multi-year initiative to increase taxpayer compliance and revenues. Altogether the request would boost resources for enforcement by $0.9 billion.

The IRS will be able to use the additional funding to increase oversight of high-income and corporate taxpayers, provide new online tools to help people communicate more easily with the agency, and improve telephone and in-person customer service, according to the funding request.

The request is a marker for the administration’s priorities, but actual funding levels will be set by Congress. Both Democrats and Republicans in recent years have signaled support for replenishing the agency’s resources after nearly a decade of budget cuts that resulted in the loss of more than 20,000 employees.

Biden’s proposal is expected to be followed up in the coming weeks by the broad enforcement initiative mentioned in the funding request, which will be aimed at wealthy individuals and corporations. Revenue from that effort would be used to fund other administration priorities, including the recent $2.25 trillion infrastructure package. 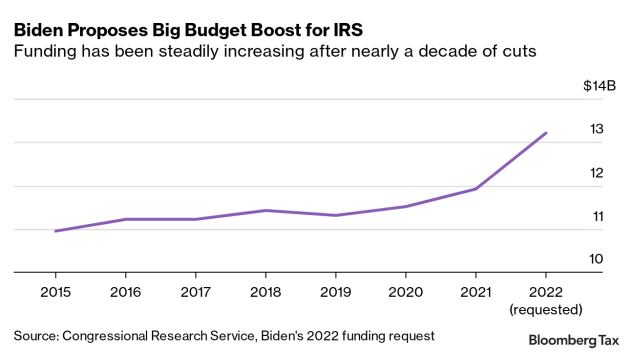 The higher budget numbers come amid reports indicating the IRS is struggling to keep pace with high-net-worth taxpayers, which typically have the most complicated returns and access to the best tax planners money can buy.

House Ways and Means Committee ranking member Kevin Brady (R-Texas) told reporters Thursday in advance of the budget request that the IRS needs to be smarter about how it pursues tax revenue during audits. More targeted, smarter audits could help close the gap in taxes paid and taxes owed, he said.

A paper published in March estimated the top 1% of households don’t report about 21% of their income, in part because random IRS audits fail to detect most sophisticated tax evasion strategies involving offshore accounts and private businesses. The paper also estimated that collecting unpaid federal income taxes from that population would increase federal revenues by about $175 billion per year.

“You can change the underlying tax rules in a way that makes gaming less attractive, especially by aligning rates and reducing tax shelters. But if you don’t have a basic functioning tax revenue collection system to ensure that those rules are followed, then you’re not going to be maximizing,” Chye-Ching Huang, executive director of the Tax Law Center at NYU Law, said Thursday during a webinar hosted by the Committee for a Responsible Federal Budget.

IRS Commissioner Charles Rettig has said a bigger budget will help the IRS address its audit shortfalls and technology challenges, though he has also stressed that it can’t be a one-time investment.

“Multi-year, consistent, adequate funding is critical,” he said at a congressional hearing earlier this year. He is set to testify Tuesday before the Senate Finance Committee.

—With assistance from Lydia O’Neal and Kaustuv Basu.

To contact the reporter on this story: in Washington at aversprille@bloombergtax.com