Williams-Sonoma Inc. struck a deal in 2008 with the California city of Shafter: the company would open a call center there and designate it as the point of purchase for all online sales to California consumers. Shafter would then give half the local sales tax it collected back to Williams-Sonoma.

It was similar to other deals between California cities and e-commerce giants, with one key distinction according to the state tax department and 300 other municipalities: most of the sales didn’t happen in Shafter.

Instead, they say, Williams-Sonoma set up a sham “order review” process to make it appear the transactions happened in Shafter while the products were actually stored and shipped from elsewhere. The process, they say, has allowed Williams-Sonoma to keep $29 million in California sales tax that the municipalities say belongs to them.

The dispute, now before the California Office of Tax Appeals, exposes the financial stakes when e-commerce giants leverage a quirk in California’s sales-tax system to bargain with cities that are hungry for jobs and revenue. As online shopping grows, the deals are fueling concerns among city and state officials that they siphon tax revenue to a few cities at the expense of hundreds of others and split the proceeds with highly profitable giants including Apple Inc., eBay Inc., Best Buy Inc. and Walmart.com. More recently, a change at Amazon.com resulted in tax money being shifted to cities with fulfillment centers and away from those with Amazon customers.

The tax department and municipalities are asking the appeals office to rule that most of the local tax on Williams-Sonoma sales should go to cities where the company has a warehouse or customers instead of to Shafter, a city of almost 20,000 near Bakersfield. Furthermore, they say, the deal was brokered by a tax lawyer under investigation in California for his role in similar deals, and that much of the money is funneled through a consulting firm that now employs the former Williams-Sonoma tax director who signed the deal for the company. Shafter has paid the lawyer and consultants $17.4 million out of the tax proceeds.

Shafter and the company argue the review process is necessary to prevent fraud, and the revenue rightfully went to the city because the transactions take place there. They also argue the tax department has overstepped its authority.

“Clearly [Williams-Sonoma] has a motivation to spin the facts in its favor,” the municipalities said in an Aug. 30 brief to the tax appeals office. 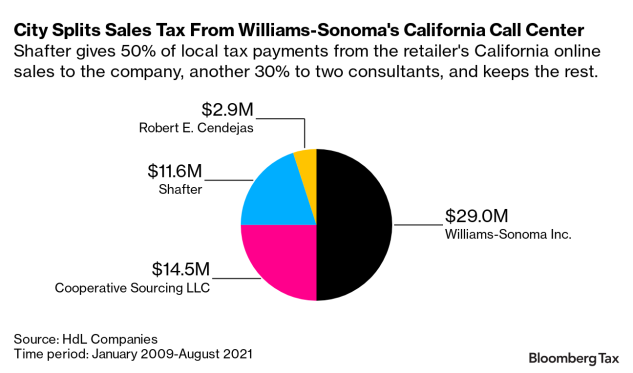 The issue before the tax appeals office is whether employees at Shafter’s call center “participate” in every online or phone sale to a California customer. If they do, the transaction takes place in Shafter and the city gets a 1 percentage point increment of the 7.25% statewide sales tax paid by the customer. If they don’t, the local tax may belong to the home location of a warehouse where orders were filled, or to cities and counties where customers live if their orders are shipped from out of state.

Details about what the order-review process involves are redacted from briefs filed in the case under a March 2021 order from the appeals office that partially granted the company’s request to seal records.

In unredacted portions of the briefs, provided to Bloomberg Tax under a California Public Records Act request, the company argues the process is crucial to preventing fraud. The company also refutes the department’s June 2020 decision that what the employees are doing has no meaningful effect on the transactions.

Under the state’s regulations, participation “does not refer to some meaningless activity performed solely as a basis to reallocate local tax away from the jurisdiction(s) entitled to that tax,” the department said.

The department’s decision came 10 years after 249 cities, 39 counties, and nine towns—including a few cities that have their own tax sharing agreements with other retailers—asked it to reallocate local tax going to Shafter.

The department changed its position twice but ultimately decided Shafter could keep $9.6 million of the $47 million it received from Williams-Sonoma between October 2009 and March 2020 because employees legitimately participated in those sales, or because the sales are too old to be eligible for reallocation.

The City of Industry, in the Los Angeles area, is due $18.2 million for California orders fulfilled from a warehouse there, the department said. Another $19.2 million in tax on goods shipped from out of state must go to county-level use tax pools that are divided between jurisdictions within the counties where customers live.

Shafter gives 50% of its tax revenue from the call center sales to Williams-Sonoma, 30% to its consultants, and keeps 20%. According to the municipalities, as of August 2021 the city has kept $11.6 million. The amount of money at stake continues to grow while the appeal is pending. 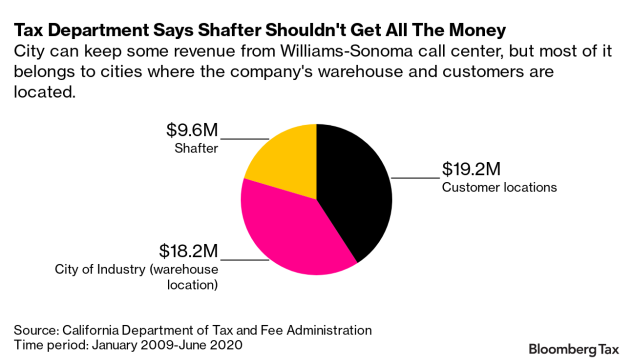 Separate from the allocation dispute are questions about the role of consultants who receive a cut of the tax proceeds. Shafter’s primary agreement isn’t with Williams-Sonoma, but with a consulting firm called Cooperative Sourcing LLC. The agreement gives the firm between 15% and 35% of the total depending on sales volume and maturity of the agreement. It is in effect until 2036.

Cooperative Sourcing is registered with the California Secretary of State as a business based in Atlanta and has shared an address there with Barnwell Consulting LLC, which provides state and local tax consulting services. Current Barnwell partner Chuck Birkett was vice president of tax at Williams-Sonoma from 2001 to 2012, according to the firm’s website and his LinkedIn page, and signed the agreement with Cooperative Sourcing on behalf of the company. Birkett didn’t respond to a request for comment. Two Cooperative Sourcing officials who signed the agreement also didn’t respond to a request for comment.

Shafter has paid Cendejas $2.9 million as of August 2021, the municipalities said. The agreement is in effect until 2023.

The municipalities allege Cendejas is engaging in the same activities that are the subject of an investigation by the California Fair Political Practices Commission into the lawyer’s role in a similar agreement between the city of Dinuba and Best Buy. The brief cites Bloomberg Tax stories on Cendejas’s activities that prompted the investigation into whether he violated state ethics law by both brokering the agreement and profiting from it. The investigation remains open, according to the commission.

“Mr. Cendejas appears to be benefiting from significant financial gain from an arrangement he helped orchestrate between Taxpayer and Shafter,” the municipalities said.

The municipalities also allege he represented both Williams-Sonoma and Shafter for several years starting in 2010 while the tax department was reviewing the case.

“Mr. Cendejas spoke on behalf of the taxpayer going forward for many years,” the municipalities said in their brief.

State law prohibits city employees or their representatives from representing retailers when they have access to the city’s confidential sales and use tax data.

Cendejas didn’t respond to a request for comment but denies he represented Williams-Sonoma, according to a transcript of a 2019 meeting with the tax department attorney who issued the June 2020 decision. Shafter amended his agreement in 2012 to specify that he can’t perform consulting services for a retailer involved in the agreement and can only disclose city sales tax data to authorized city employees.

Shafter and Williams-Sonoma argue in a joint brief that even if the tax appeals office sides with the department and municipalities it should use its discretion to let Shafter keep the money.

“Reallocation would likely necessitate a significant reduction in Shafter’s workforce and a corresponding reduction in public services, some of which would be dangerous to residents,” they said.

But Williams-Sonoma and Cooperative Sourcing must return what they have received if the appeals office requires that the money be redistributed from Shafter to the other cities, according to their contracts. That would be $43.5 million, based on the municipalities’ calculations. Cendejas’s contract doesn’t make clear whether he would be required to repay the city.

To contact the editors responsible for this story: at bkohn@bloomberglaw.com; at jharrington@bloombergindustry.com