Rep. Tom Suozzi is one of the lawmakers leading the charge to roll back the $10,000 deduction cap on state and local tax payments.
Photographer: Sarah Silbiger/Bloomberg

House Democrats continue to search for a way to satisfy lawmakers who want to scrap the deduction limit on state and local taxes without losing progressives wary of a tax cut that would overwhelmingly benefit the wealthy.

The budget blueprint Democrats passed this summer instructs lawmakers to include some form of SALT cap relief in a tax-and-spend plan of up to $3.5 trillion. 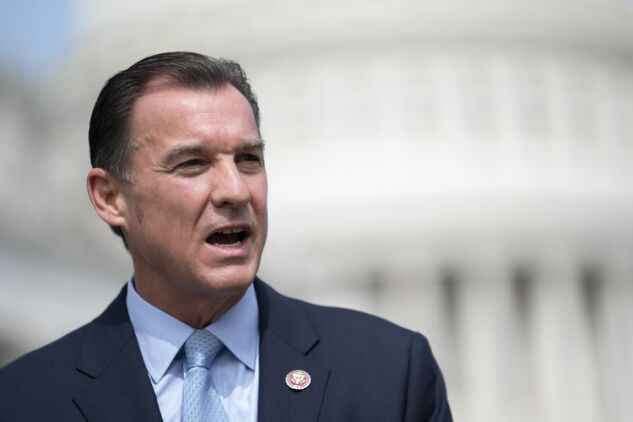 A full repeal would be costly and politically difficult to pass with razor-thin margins in both chambers. But a coalition of lawmakers from New York, New Jersey, and other states with high tax rates continue to insist that is what it will take for them to back the legislation.

“I will support my progressive friends and the Democratic caucus on big bold initiatives, on getting things done to improve people’s quality of life,” Representative , a New York Democrat, said in an interview this week. “But no SALT, no deal.”

Suozzi is one of the leaders of the “SALT Caucus”, an alliance of more than 30 lawmakers who want to roll back the $10,000 deduction limit established in the Republican-led 2017 tax law. While they argue that the cap unfairly targets Democrat-dominated states and encourages people to move to Florida and other low-tax states, progressives counter that expanding the deduction shouldn’t be a priority in a social spending bill because the lion’s share of the benefit would go to the wealthy.

The House tax-writing panel is taking a phased approach to its part of the tax-and-spend plan, starting a multi-day markup Thursday with consideration of proposals on health care, paid leave, and retirement savings.

“We are still working through the tax provisions,” said California Representative , chair of the Ways and Means Select Revenue Measures Subcommittee. “We have a ways to go.”

Chairman of Massachusetts said Thursday the tax portion of the committee’s reconciliation plan will likely be released over the weekend. A top Democratic staffer, speaking on condition of anonymity due to the sensitive nature of the talks, told Bloomberg that a SALT cap compromise has been difficult to reach so far.

, who spent six years working as a senior staffer for former Senate Majority Leader , said Suozzi and other SALT cap opponents will need to scale back their ambitions if they want a deal.

A full repeal isn’t realistic because of how much it would cost, Manley said. The Tax Foundation, a right-leaning think-tank, has estimated a full repeal of the cap would cost $380 billion. The size and scope of the overall reconciliation package is already dividing Democrats, with moderate lawmakers like West Virginia Senator balking at the idea of a $3.5 trillion economic package.

“Unless they want to be responsible for tanking the President’s legislative agenda, the ‘No SALT, No Deal’ caucus is going to have to figure out a Plan B,” Manley said. “I can’t imagine they are going to get everything they want.”

Options to lower the price tag include raising the deduction limit instead of lifting it completely or pursuing a short-term repeal of the cap.

In 2019 Suozzi sponsored legislation that aimed to double the cap to $20,000 that year for married couples filing jointly, then temporarily repeal the cap for the following two years. Both of those changes would only have applied to people making under $100 million a year.

That bill passed the House, but 16 Democrats voted against it, including New York Representative , who has described a full repeal as a “gift to billionaires.” Democratic leadership is dealing with a much narrower majority this Congress and can’t afford to lose that many votes with no Republicans expected to support the reconciliation package.

The nonpartisan Joint Committee on Taxation has estimated that repealing the SALT cap would cut taxes for more than 13 million people, but 99% of the benefits would go to people earning $100,000 or more.

New Jersey Representative , a Democrat who also co-leads the SALT Caucus, said taxes went up on the middle class in New Jersey after the cap went into effect, driving people to move to states with a lower cost of living. He said Thursday that his position remains that the cap must be fully repealed.

“This is an existential threat to Jersey,” Gottheimer said.

To contact the reporter on this story:
in Arlington at kbasu8@bloomberg.net

To contact the editors responsible for this story:
at pambrosio5@bloomberg.net