Suspecting that Airbnb Inc. and other rental marketplaces may be shorting states and local governments billions of dollars in taxes, lawmakers in at least a half-dozen states are pushing legislation to take control of the process.

While the proposals vary, the states aim to close what they see as a yawning tax gap caused by a reliance on hundreds of industry-driven voluntary compliance agreements (VCAs) with local governments. Critics contend the agreements dictate terms for administering lodging and tourism taxes and saddle revenue agencies with flimsy data-sharing rules that prevent audits.

While Airbnb says it has collected and remitted $2 billion in taxes over the past four years under the VCA model, some lawmakers say the San Francisco-based e-commerce company and similar platforms aren’t forwarding anything close to the amounts owed.

“I don’t believe those platforms are actually collecting,” said Wisconsin Rep. Joel Kitchens (R), who sponsored a lodging tax enforcement bill in his state. “They claim they will get it to us, but I’m very skeptical.”

Some local jurisdictions speculate they are banking only a quarter of the occupancy taxes owed. The revenue implications are only getting larger as the U.S. short-term rental industry continues to expand.

“The short-term rental industry is a large business worth more than $30 billion a year. The average lodging tax rate is in the 8% range across the country. So there should be total collections in the billions of dollars, but I don’t think that’s actually happening,” said Ulrik Binzer, chief executive officer of Host Compliance LLC, which provides lodging-tax compliance services to more than 300 municipalities across the U.S. and Canada.

By way of example, Binzer said, Host Compliance took on Nashville, Tenn. as a client after the city declined to negotiate an agreement with Airbnb. At the time, annual occupancy tax collections hovered around $1 million. After implementing a series of short-term rental compliance and enforcement strategies, Nashville boosted its collections to $9 million annually, he said.

Revenue from more than 1.2 million short-term rental units listed in the U.S. rose 29.2% to $38.9 billion during 2019, according to data compiled by AirDNA LLC, a data analytics provider to the lodging industry. Before the coronavirus pandemic shocked travel markets, AirDNA was estimating a growth rate of 15% for rentals in 2020, creating revenue of $44.8 billion for the year. 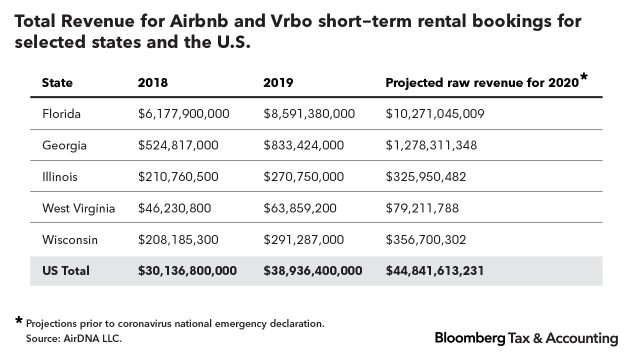 Some states are working from a model launched last year by Massachusetts, which created the first statewide registry of rental units and imposed occupancy tax collection duties on “rental intermediaries.” Others are designating the rental platforms as “marketplace facilitators” under the precedent created by the U.S. Supreme Court’s 2018 ruling in South Dakota v. Wayfair, which offered a framework for states to collect taxes from remote retailers and marketplace facilitators. Marketplace facilitators contract with third parties to sell goods and services over an electronic platform.

The online marketplaces are lobbying for modifications that would loosen their collection duties or limit the authority of revenue agencies and local governments.

Airbnb, by far the largest of the more than 100 booking platforms, disputes any suggestion it shortchanges states and municipalities. It says it has 400 compliance pacts with revenue agencies around the globe, and that 72% of U.S. bookings are covered by them.

“Airbnb complies with tax laws and works closely with governments in pursuit of efficient tax administration,” Airbnb said in a statement provided to Bloomberg Tax. “In places where we are collecting tax at the state and local levels, we collect and remit the entire amount due.”

Vrbo and HomeAway, both owned by , operate under a similar voluntary tax collection model. The platforms collect some taxes, but only in “jurisdictions where we are required by law or an agreement,” Expedia states on its tax compliance website.

The rental platforms and a libertarian legal-advocacy organization are lobbying for their own legislative reforms, particularly in states with strong Republican majorities. Bills in Florida, H.B. 1011, and South Carolina, H. 3187, would largely preempt local governments from restricting or regulating short-term rentals.

“We come to this from a property rights perspective,” said Matt Miller, a senior attorney at the Goldwater Institute. “It should be the right of homeowners and property owners to make reasonable use of their property, including short-term rentals and home-sharing.”

The duty of collecting taxes on short-term rentals historically fell on owners but compliance was scattershot at best. Twenty-six states now place the obligation to collect and remit on the owners while 17 place this duty on third-party facilitators, the Bloomberg Tax 2019 Survey of State Tax Departments found.

“You have statutes that were written decades ago and then a new industry or service comes along and it’s not clear how it fits in,” said Carl Davis, research director at the Institute on Tax and Economic Policy.“So states and localities have to play catch-up.”

Airbnb generally collects and remits occupancy taxes on behalf of owner-operators when guests book accommodations, but only in specific jurisdictions.

“Even if Airbnb automatically collects and pays certain occupancy taxes on your behalf, you may still be required to manually collect other occupancy taxes. For example, Airbnb may collect regional taxes but not local ones in some places,” the company states in an advisory to hosts.

Airbnb began negotiating compliance agreements in 2014 to blunt accusations of tax avoidance. Many communities like them because they ensure quick revenue with little effort.

“Airbnb has ploughed new ground without a playbook. The VCAs have continued to evolve, reflecting changes in Airbnb’s business and the changing needs of local jurisdictions,” Richard Pomp, a law professor specializing in state and local tax issues at the University of Connecticut School of Law, said last year in a report. Pomp told Bloomberg Tax he was compensated by Airbnb to produce an independent analysis of the company’s network of VCAs.

“From a tax perspective, I’m not aware of another industry that gets to pay its taxes on the honor system,” said Troy Flanagan, vice president of government affairs for the American Hotel and Lodging Association.

Dan Bucks, director of the Montana Revenue Department, wrote a report for AHLA in 2017 highly critical of the VCA process. He emphasized the agreements “do not guarantee accountability for the proper payment of lodging taxes because tax agencies cede substantial control of the payment and audit processes to Airbnb.”

In an update last year, Bucks said states and localities should should tear up their compliance agreements and revise tax codes to reflect the Wayfair ruling.

“Post-Wayfair, Airbnb’s voluntary agreements are now a relic of a past legal premise that no longer exists,” Bucks wrote.

-- With assistance from Laura Mahoney in Sacramento, Calif.