Steven C. Wrappe, of Grant Thornton LLP, discusses the three taxing approaches that have emerged to address the tax challenges of the digital economy—excise taxes, modified transfer pricing rules and tariffs. Each of these is a potent weapon in a global trade struggle and each imposes a very different tax impact on multinational enterprises.

Over the last decade, the global digital economy has grown at a furious pace. According to U.S. Census Bureau statistics, U.S. retail e-commerce sales as a percentage of total retail sales has increased from approximately 4% in 2010 to more than 10% in 2019.

This digital growth may create supply chain efficiencies, but it has also produced a serious global tax problem. Internet-based business models now mean that large multinational enterprises (MNEs) can engage in transactions with consumers in a country—the “market” country—without triggering the traditional taxing nexus in that market country. The fact that MNEs, particularly high profile and highly profitable MNEs, are not subject to taxing jurisdictions in those market countries has been identified as a tax challenge that needs to be addressed.

A number of market countries have proven unwilling to wait for the OECD to achieve a consensus resolution of this issue. In the period since the Action 1 Report was issued, three taxing approaches have emerged to address the tax challenges of the digital economy—excise taxes, modified transfer pricing rules and tariffs. Each of these is a potent weapon in a global trade struggle and each imposes a very different tax impact on MNEs. Further, a lack of global coordination still represents the worst-case scenario for MNEs.

Developments regarding the tax challenges of digital business have recently accelerated.

In October 2015, the Action 1 Report recommended that the OECD should monitor the digital economy before taking any action.

In March 2017, the G-20 leadership requested the OECD to deliver an interim report on the tax implications of digitalization by 2018 (Interim Report). The Interim Report, issued in March 2018, recognized differing views between countries regarding the tax issues created by digitalization and how to address them, but recognized any long-term solution must deal with taxing jurisdiction and profit allocation. Some countries even indicated an interest in imposing their own unilateral excise taxes on certain e-services within their jurisdictions as “interim measures.”

In January 2019, the OECD attempted to synthesize a compromise position from the submitted approaches to quell unilaterally imposed interim measures. The OECD suggested a two-pillar approach, Pillar 1 of which proposed to expand taxing jurisdiction for “market” countries and impose a formulary allocation of deemed residual profits to include an allocation to those market countries. Pillar 2 would allow countries to tax profits in other jurisdictions that have a low effective tax rate.

The OECD issued a public discussion draft in February 2019, followed by stakeholder comments in March, and a detailed plan of work in May 2019.

The OECD issued a “unified approach” in October 2019, which attempted to develop a consensus around the two-pillar approach.

The OECD progress has not proven quick enough for many countries, who are proceeding with their own excise taxes as interim measures.

In December 2019, the U.S. Trade Representative responded with a report (USTR Report) concluding that the French DST discriminates against U.S. companies, is retroactive, and is inconsistent with normal international tax principles.

The U.S. is currently considering imposing a tariff on French produced goods in response to the DST. The USTR Report proposes an additional customs duty of up to 100% on certain French products including wine, cheese, and handbags.

In March 2019, France enacted a 3% DST on the portion of gross revenues from digital advertising and data-driven revenue earned in France. It is an excise tax that applies to companies with in excess of 750 million euros ($831 million) of global revenue and 25 million euros French-sourced revenue, and it’s expected by French tax authorities to raise over 500 million euros per year in tax revenues. Italy, Austria, Turkey, the U.K., Spain, Canada and Mexico have all enacted or are considering similar unilateral measures.

“Transfer pricing” refers to the pricing of transactions between related entities for goods, services, intangible property, rents, and loans. The transfer price determines the division of total profit between the related entities.

As market forces do not necessarily control transaction prices within a related group, the U.S. and numerous other countries have enacted transfer pricing rules to prevent the use of improper transfer pricing to shift profits outside of their taxing jurisdiction. Globally, transfer pricing rules adhere to the “arm’s length principle” whereby the amount charged between related parties should be the same as if those parties were not related.

The OECD’s Pillar 1 approach proposes an expansion of tax nexus concepts and a revised profit allocation approach to match taxing rights with value creation. Under these rules, more taxing rights and profits would be allocated to the market country than under the existing tax framework; transfer pricing analysis would be performed pursuant to a residual profit split method using formulary apportionment to allocate the deemed residual profit.

As the Pillar 1 approach is inconsistent with long-held global tax policies regarding taxing jurisdiction and the arm’s length standard, a global consensus on this approach would be necessary to avoid substantial double taxation.

A “tariff” or “customs duty” is a tax on imported goods overseen by Customs officials. The tariff rate depends on the particular class of goods and “country of origin.” The tariff rules impose initial responsibility for payment of the tariff on the “importer of record,” usually a U.S. distributor or manufacturer. Upon sale of the imported product, the tariff costs are reflected in the cost of goods sold for the imported product.

Based upon the USTR Report, the U.S. is currently considering a tariff of up to 100% on approximately $2.8 billion of French products including wine, cheese and handbags in retaliation for the DST. The U.S. has recently threatened and imposed substantial tariffs on imports of aluminum and steel (10% and 25%, respectively), and tariffs (5% to 25%) on the annual importation of $350 billion of goods manufactured in China; China has responded with retaliatory tariffs on U.S. goods.

Excise taxes, transfer pricing and tariffs are potent weapons, each of which produces significant tax revenues for the market country, even without traditional taxing jurisdiction over both parties to the transaction. However, the impact on MNEs is likely to be quite material, and a lack of consensus could produce devastating levels of double taxation.

The three different approaches affect which companies are directly impacted, who actually pays the tax or tariff, the base for calculating the tax or tariff and the agency responsible administering it, as well as the ability to receive relief from double taxation.

The direct impact of an excise tax may be limited to a small group of companies with over 750 million euros on digital advertising and data-driven revenue, and tariffs may be limited by particular goods from particular countries, but the impact of modified transfer pricing is not as likely to be so narrowly defined. 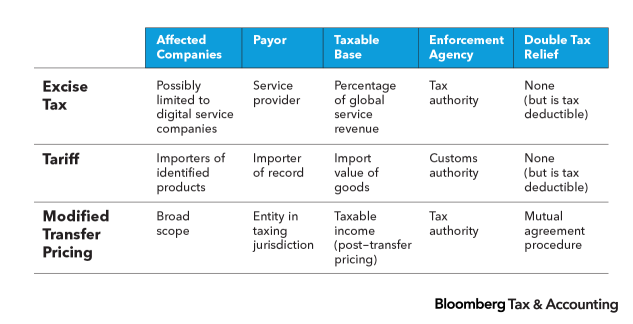 Each of these approaches would require a re-evaluation of functions and risks of the parties and might require a transfer pricing adjustment to achieve an arm’s length result. Most importantly, inconsistent adoption and implementation of these taxing approaches by countries leaves MNEs at great exposure to double taxation and drastically increased tax compliance costs. Only a global consensus on the appropriate approach would alleviate exposure to tax disputes and substantial double taxation.

Given the potential for double taxation and increased compliance costs, MNEs should review current proposals to evaluate the likelihood that the tax approaches will apply to them and the potential tax impact.