The OECD is asking for feedback on its work to improve dispute resolution through mutual agreement procedure, or MAP.
Photographer: Eric Piermont/AFP/Getty Images

As fights between multinationals and tax authorities continue to rise, companies hope making the dispute resolution process smoother and faster will give them more certainty.

Disputes have been increasing over the last 20 years as more tax authorities around the world take a firmer stance on adjusting multinationals’ tax bills—particularly in transfer pricing, or cross-border intercompany transactions, tax practitioners say.

“Dispute resolution is the key focus for heads of tax at multinationals,” said Sharon Katz-Pearlman, global head of dispute resolution and controversy at KPMG. “It’s for one very simple reason, which is that it is on the rise.”

Companies and practitioners will get the chance to make their case for making dispute resolution easier at an OECD public consultation on Monday. The Organization for Economic Cooperation and Development will hear feedback on its work to improve dispute resolution through mutual agreement procedure, or MAP, in which two treaty partner countries work together to resolve disagreements about how to tax cross-border companies that results in double taxation.

Reducing the length of time it takes to resolve disputes is a key focus, because it means more certainty for companies.

“The longer something goes unresolved, the longer you don’t have closure and certainty on that issue,” Katz-Pearlman said.

Companies have been looking with alarm at the rising number of cases and worry about finding themselves in more disputes, or about the cases taking longer to resolve. Those cases can be costly, and leave them in an uncertain tax position for years.

In 2019, for example, countries closed more than 1,800 cases that were started within the prior three years or since a country joined the OECD’s Inclusive Framework on BEPS, created as part of the group’s fight against base erosion and profit shifting.

But almost 2,700 new cases were opened that year, leaving the MAP system with a post-2016 inventory of more than 4,500 cases by the end of that year—over 800 more cases than at its start. 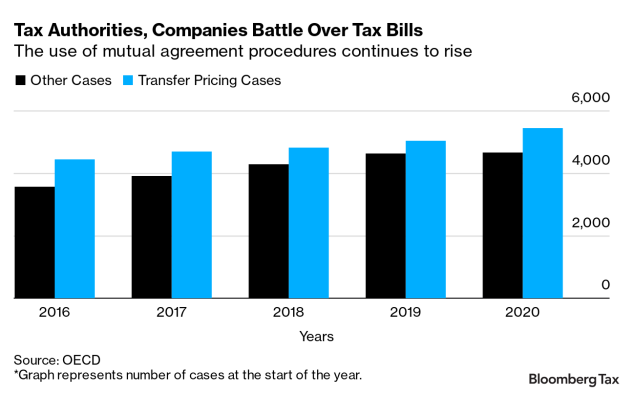 The trend grew as tax authorities became savvier about transfer pricing, became more aware of corporate base erosion and profit shifting through the OECD’s work, and looked to increase tax revenue.

For example, the number of transfer pricing cases are rising in India, and the government is especially scrutinizing digital business models, said Meyyappan Nagappan, leader in the international tax practice at Nishith Desai Associates in Mumbai, in an email to Bloomberg Tax.

In cross-border transactions that involve at least two jurisdictions—particularly transfer pricing transactions—if one country determines that more income belongs there and accordingly adjusts a company’s tax bill upwards, the income may be double-taxed if the other country doesn’t agree. Governments use the MAP process to reach agreement in these situations.

The OECD took on improving dispute resolution as part of its 2015 plan to tackle base erosion and profit shifting—known as Action 14 of the BEPS plan. That work has included introducing minimum standards for MAP and publishing peer reports to evaluate countries’ progress.

Practitioners said the OECD’s efforts to improve MAP had been broadly helpful, and that more work could help ease the strain on the MAP system on both tax authorities and taxpayers from a growing number of cases.

“It’s actually a very successful process, it’s just that there’s an awful lot of cases coming into the process,” said Diane Hay, special adviser on international tax at PwC in London. “That’s what worries people, because that means they take a long time to resolve.”

Transfer pricing cases can take 30.5 months on average to resolve, while other cases average 22 months, according to 2019 OECD data.

“Current dispute resolution mechanisms take years to be finally resolved and that has a cascading effect on subsequent years of operations as well,” Nagappan said. “This makes tax disputes a cash flow issue at best or an unfeasible business model at worst, both of which are undesirable.”

Shorter cases would also help reduce the overall number of cases, or MAP inventory—which would ease the strain on tax authorities’ resources so more time and attention could be paid to each case.

New measures could help prevent cases from reaching MAP if there is a clear resolution to what margins a company should meet—and therefore how much tax it should pay—in a jurisdiction, based on past data from other taxpayers, Hay said. She encouraged tax authorities to use that data to help keep low-risk taxpayers out of the MAP process where possible and save resources for more difficult cases.

Nonetheless, it’s important that tax authorities still focus on increasing access to MAP, which has been a problem in some jurisdictions, said Barbara Angus, global tax policy leader at EY. Too much focus on reducing case inventory may miss that, she said.

Companies aren’t able to access MAP in all countries if MAP provisions aren’t included in applicable tax treaties, or the provisions don’t cover the relevant situation, AstraZeneca PLC said in its Jan. 8 written response to the OECD’s consultation. The company didn’t respond to a request for additional comment.

Other suggestions for improvements included transparency measures such as publishing precedent.

“MAP can be a black box for the taxpayer,” said Stef van Weeghel, global tax policy leader and partner PwC in the Netherlands. “There is room for more transparency.”

The process could also be more efficient—and see a reduced caseload—if the results of a MAP case could apply to additional tax years, Hay said.

Applying MAP results to multiple years is desirable because it would help save cost and effort for both companies and tax authorities, Tata Consultancy Services Ltd. said in its letter, published Jan. 12. The company didn’t respond to a request for additional comment.

To contact the reporter on this story: in Washington at igottlieb@bloombergtax.com