Recognition is growing in ’s inner circle that efforts to overturn ’s victory will be futile, though some advisers have urged the president to pursue focused legal challenges, according to people familiar with the matter.

Trump has given no indication he’s preparing to concede. His closest aide, son-in-law and senior adviser , has recommended the president ask courts to ensure transparency around ongoing counts of ballots in several contested states, the people said.

The president is falling further behind Biden in three pivotal states -- Pennsylvania, Georgia and Nevada -- and has not made up enough ground in Arizona to make it likely the state will flip back to Trump’s column. He now trails Biden by about 101,000 votes combined across the four states, with the largest deficits in Pennsylvania and Nevada.

There is awareness among Trump’s aides that the election has been decided, according to three of the people.

But the president plans to explore all options to ensure legal votes are counted and votes the campaign contends are illegal are not, one of the people said. Neither Trump or his team have made public any evidence of widespread irregularities in the election or any illegal votes. 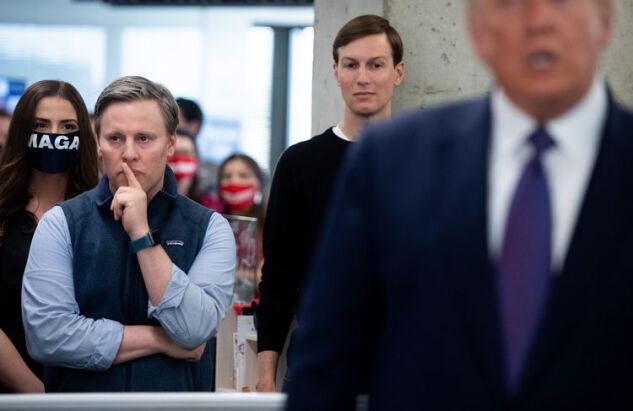 The president’s team plans to make additional legal moves starting on Monday, according to one person, who declined to elaborate.

Trump was at his northern Virginia golf course on Saturday when the race was called and returned there on Sunday.

Former President spoke to Biden and Harris on Sunday, his office said in a statement that referred to Biden as the president-elect.

Bush said Trump “has the right to request recounts and pursue legal challenges” but added that “the American people can have confidence that this election was fundamentally fair, its integrity will be upheld, and its outcome is clear.”

Members of Trump’s team met with the president Saturday at the White House after he played 18 holes of golf: , a Republican political operative who is overseeing the legal fight; attorney ; campaign manager and senior political aides Justin Clark and Jason Miller.

Trump continues to insist he defeated Biden, a claim with no merit that’s been echoed by others in his orbit including personal attorney . The president tweeted Saturday he won the election “BY A LOT.”

There are mixed feelings in Trump’s circle about his decision to golf on Saturday, when it was possible the race might be called for Biden. One adviser said it signaled the president didn’t care whether he won or lost, even while campaign officials -- at his orders -- were forging ahead with legal and public-relations challenges.

Moments after the race was called, Giuliani held a news conference at a lawn-care company in the outskirts of Philadelphia, where he claimed fraud and irregularities in the election -- without presenting credible evidence -- and declared Trump would not concede.

White House and campaign legal teams are working in unison to expose any irregularities they can, one person said. White House legal counsel was in a meeting with Trump on Friday, along with Kushner, Bossie, Miller, Clark, Stepien, longtime adviser , social media chief and , the vice president’s chief of staff.

So far, the legal fight has not yielded much success. Several lawsuits have been dismissed in Pennsylvania, Nevada, Georgia and Michigan. The Supreme Court temporarily granted the Pennsylvania Republican Party’s request to affirm that late-arriving mail-in ballots in the state should be segregated case they are disqualified.

But it’s not clear how that would help Trump. He needs more ballots counted in order to gain votes in Pennsylvania after Biden took a lead.

Former New Jersey Governor , a Trump ally, said Sunday that Republicans must eventually acknowledge Biden’s win but added the president’s team has taken a while to accept that they lost a “very contentious” election.

“You have the president sitting in the White House not acknowledging it and I think there’s lots of Republicans who are trying to feel their way around that,” Christie said on ABC News’s “This Week.”

“That’s why it was so important to say early on to the president, ‘if your basis for not conceding was voter fraud, then show us,”’ he said.

Top campaign aides signaled they’ll fight as long as the president wants to, even as the reality of defeat dawns upon them.

Communications director tweeted a photo of Washington Times covers that purportedly declared the winner of the 2000 presidential race. Those projections were retracted when took a narrow lead in Florida and Bush went on to win the presidency after the Supreme Court halted a recount in the Sunshine State.

The Washington Times said the images were “doctored” and that the paper “never ran a ‘President Gore’ headline.” Murtaugh later deleted his post.