Paul Manafort may have so far escaped conviction on 10 out of 18 fraud counts brought by Special Counsel Robert Mueller, but at sentencing it may not mean much relief for the former Trump campaign head.

Though the jury hung on those 10 counts, Judge T.S. Ellis can still consider the conduct alleged in those charges when he hands down Manafort’s sentence on the eight convictions, federal white collar lawyers told Bloomberg Law.

The controversial practice of considering conduct beyond convictions in sentencing has been condoned by the U.S. Supreme Court, but has been widely criticized—not only by the defense bar, but by judges like the president’s high court nominee, Brett Kavanaugh.

“At the end of the day, in a federal trial, unfortunately, if you don’t beat every count, as far as sentencing is concerned, it’s like you did not beat anything,” defense attorney and former prosecutor Michael F. Bachner told Bloomberg Law. 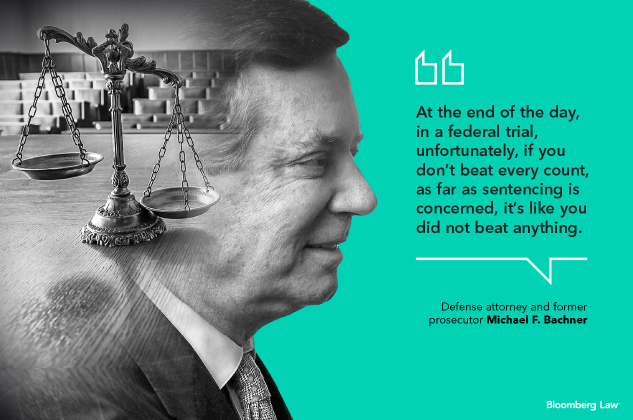 Manafort’s sentence “indeed may not be any different,” added Sandick, also a former prosecutor. “Some of the other conduct might be relevant conduct for sentencing.”

Though federal sentencing is complex and involves multiple factors, some legal experts have pegged Manafort’s likely prison term at around a decade or a little less.

And Mueller can still retry Manafort on the hung counts. He has a week to decide whether he’ll do so.

There’s also the possibility that Trump will issue clemency to Manafort, who faces another trial in Washington next month on separate charges.

“Just like a judge can consider a defendant’s good character, his charitable history, and similar attributes, a judge can also exercise wide discretion in considering uncharged or even acquitted conduct in determining how long a sentence to impose,” said Bachner.

If Ellis would have been able to consider acquitted conduct against Manafort had the jury acquitted on those 10 counts, “he certainly may, but does not have to, consider conduct for which the jury was unable to reach a verdict.”

Kavanaugh has criticized the practice during his time as a judge on the U.S. Court of Appeals for the D.C. Circuit. For example, in a 2015 case, he wrote: “Allowing judges to rely on acquitted or uncharged conduct to impose higher sentences than they otherwise would impose seems a dubious infringement of the rights to due process and to a jury trial.”

Even though the practice is lawful, trial judges should avoid it, Kavanaugh wrote.

Jordan S. Rubin
Reporter
Kavanaugh Praises Defense Foe Rehnquist on Crime and Punishment
Kavanaugh’s Place Among Court’s Conservatives Unclear
Manafort Faces 10 Years in Federal Prison, Legal Experts Say
Trump Can Save Manafort with a Pardon. The Question Is, Will He?
Trump’s Pardons Quicker Than Obama’s, But ‘Haphazard’
© 2022 The Bureau of National Affairs, Inc.
All Rights Reserved