Four Perkins Coie LLP attorneys discuss the recent charges filed against Rep. Chris Collins. The authors note that the case is a useful reminder of the duties owed by board members, the potential liability of non-trading tippers, and exposes potential conflicts of interest when members of Congress have significant outside interests.

The recent insider trading charges against Rep. Chris Collins (R-NY) serve as a useful reminder of key legal issues associated with the receipt and sharing of confidential corporate information.

Collins, a board member of Innate Immunotherapeutics, a pharmaceutical company, was charged by the Department of Justice (DOJ) in a criminal indictment and by the Securities and Exchange Commission (SEC) in a civil complaint for allegedly tipping his son with material nonpublic information about the company. Collins purportedly told his son about negative clinical trial results for Innate’s multiple sclerosis drug, information that when made public resulted in a 92 percent drop in the company’s stock price. According to the government, Collins’s son in turn tipped his fiancée’s father, and both tippees (the son and the fiancée’s father) sold more than a million shares and avoided losses of more than $700,000.

Renewed Focus On Outside Interests Of Members Of Congress

Collins not only served on the board of Innate but also served on the Health Subcommittee of the U.S. House of Representatives Committee on Energy and Commerce, which plays a role in approving FDA-related laws. Furthermore, Collins introduced bills that assisted Innate and other companies in the pharmaceutical industry. (Most of the bills—aimed at increasing grant funding, easing restrictions on drug research methods, and excluding certain drugs from federal discount programs—have not been enacted, with the exception of the 21st Century Cures Act, which was designed to streamline drug approval through the FDA, and which was signed into law in December of 2016.)

Members of Congress can lawfully serve on corporate boards subject to certain conditions, and Members can trade in the securities of companies in industries over which they have oversight. Such corporate involvement, however, risks creating potential conflicts of interest. While the government’s criminal and civil cases against Collins do not relate to information he received in his capacity as a Congressman, the cases may result in renewed scrutiny of permissible outside activities by legislators and the risks associated with such activities. (Though not implicated in the cases against Collins, the Stop Trading on Congressional Knowledge (STOCK) Act applies the long-standing prohibition against members of Congress using nonpublic information gained through their government positions as a means for making a private profit to the context of insider trading. The STOCK Act establishes a duty of trust and confidence owed by members of Congress to Congress, the government, and U.S. citizens that is similar to the one owed by private board members to their companies and shareholders, and this duty creates liability for insider trading where a member of Congress inappropriately uses material nonpublic information acquired in her official capacity. STOCK Act, Pub. L. No. 112-105, §4, 126 Stat. 292.)

A Reminder of the Fiduciary Duties of Board Members

A primary fiduciary duty of board members of public companies is a duty of loyalty. This duty requires board members to prioritize the interests of their companies and its stockholders ahead of personal interest. A director who tips others with material nonpublic information about the corporation may violate this fiduciary duty. Directors are also subject to duties imposed by the policies of their corporations. Indeed, the SEC’s complaint alleges that Innate’s policies prohibited Collins, as a director, from tipping others with inside information if he knew, or ought reasonably to know, that the other person would be likely to trade on it. Such policies are standard for directors in public companies. Board members regularly receive material nonpublic information about the companies on whose boards they serve, and the allegations against Collins illustrate the risks involved when a board member breaches his duty to protect such information.

Non-Trading Tippers Are Not Immune From Liability

Collins’s attorneys have highlighted that “[i]t is notable that even the government does not allege that Congressman Collins traded a single share of Innate Therapeutics stock.” Nor could Collins have sold his shares because they were held on the Australian Securities Exchange, which at the time that the alleged misconduct occurred froze trading of Innate stock under guidelines relating to activity pending the announcement of significant events that could affect the market. More importantly, it is well established under the federal securities laws that a tipper who does not trade can still be liable for insider trading.

A tipper is liable for insider trading if he or she breaches a duty of trust or confidence to the source of the information. Absent some personal benefit to the tipper, there is no breach of the duty. What constitutes a personal benefit sufficient to trigger liability for insider trading has recently been a hot issue in the courts. In 2014, the Second Circuit held that a gift of confidential information to a trading relative or friend does not confer a personal benefit to the tipper unless there is “proof of a meaningfully close personal relationship” between the tipper and the tippee that shows at least a potential gain of something valuable by the tipper. United States v. Newman, 773 F.3d 438, 452 (2d Cir. 2014, pet. denied). The requirement to show a meaningfully close personal relationship placed a higher burden on the government when pursuing insider trading cases where the insider herself did not trade on information.

The Newman case attracted significant negative comment, and in 2016, the U.S. Supreme Court rejected the notion that a tipper and tippee must share a “meaningful close relationship” before a gift of information can be viewed as a breach of the insider’s duties to the company. Salman v. United States, 137 S. Ct. 420 (2016). The Supreme Court in Salman reviewed a case involving an investment banker who provided inside information to his brother, who subsequently provided that information to his own brother-in-law, Salman. The Court reiterated its ruling in Dirks v. SEC, 463 U.S. 464 (1983) that a tippee acquires the duties owed by an insider to a company—and can therefore be liable for trading on confidential information—where the insider makes a gift of confidential information to a relative or friend, regardless of whether the tipper personally obtained some other tangible benefit. Id. at 428. The tipper is not required to receive something of a “pecuniary or similarly valuable nature” in exchange for a gift to family or friends. Further, in restating the theory behind holding the insider liable for the actions of each tippee, the Court explained that the situation is “the same thing as trading by the tipper following a gift of the proceeds” to the tippee. Id. While Salman did not address the question of tipping outside of a family circle, in the case against Collins, where the tippees are all relatives and friends, Salman seems to create potential liability for insider trading.

The Collins case also illustrates when tippees can be potentially liable for insider trading. According to the DOJ indictment and SEC complaint, the inside information flowed in the following chain: 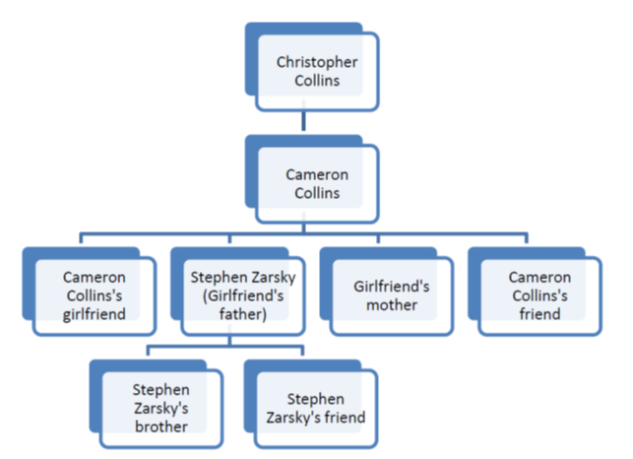 The only difference between the chain as outlined in the DOJ indictment and the SEC complaint is the indictment also includes Stephen Zarsky’s sister, referred to as CC-4, as an additional co-conspirator who received the information from Stephen Zarsky.

DOJ has criminally charged the alleged tippees Cameron Collins and Stephen Zarsky, who have also been named as defendants in the SEC’s complaint. Lauren Zarsky (Cameron Collin’s fiancee) and her mother Dorothy Zarsky settled charges of insider trading by the SEC, and are presumably cooperating in DOJ’s criminal case. Stephen Zarsky’s bother and friend have not been charged.

Because the DOJ and SEC cases against Collins were brought in the Second Circuit, tippee liability is subject to a test articulated in the Newman case left undisturbed by the Supreme Court in Salman. Under Newman, the government must prove that the tippee had knowledge that the insider personally received a sufficient personal benefit. In a case involving multiple levels of tippees and remote tipees, as in Newman, this can be a significant hurdle for the government to meet. Remote tippees are unlikely to have knowledge of the connection between the insider and the original upstream tippee, and therefore may not be able to ascertain the requisite knowledge. But in the case against Collins, this may not be difficult for the government to prove given the close relationships among the charged parties.

If the allegations in the DOJ and SEC complaint are true, then Stephen Zarsky knew that Rep. Collins was the original source of insider information regarding Innate Immunotherapeutics that he had shared with his son. A jury could therefore infer that Rep. Collins personally benefited from making a gift of confidential information to a trading relative. The same analysis would apply to the defendants who have already settled with the SEC, Lauren and Dorothy Zarsky. Those most remote from the original tip, Stephen Zarsky’s bother and friend, have not been charged. It is possible that the government did not charge Zarsky’s brother and friend because of concerns about proving the knowledge element for these tippees.

If the government proves its allegations, the Collins case presents a textbook example of insider trading. A corporate insider, subject to a clear duty not to disclose material nonpublic information, is alleged to have disclosed such information to relatives and friends who promptly traded on the information, averting hundreds of thousands of dollars in losses. The case is also a useful reminder of the duties owed by board members, the potential liability of non-trading tippers, and the elements required for tippee liability. Finally, the case sheds renewed light on potential conflicts of interest when members of Congress have significant outside interests, including serving on boards of public companies.

Barak Cohen, a former federal prosecutor, is a partner in the White Collar and Investigations practice of Perkins Coie LLP, and Litigation Lead for the firm’s Washington, D.C. office.

Mary C. (Molly) Moynihan, a partner at Perkins Coie in Washington, is co-chair of firm’s Investment Management Practice and a member of the firm’s Management and Executive Committees.

Luis R. Mejia, a former chief litigation counsel at the Securities and Exchange Commission, is a partner at Perkins Coie in Washington.

E. Steve Smith is an associate at Perkins Coie in Dallas.