The U.S. Supreme Court made waves when it announced that it would hear arguments over the phone this month in light of the coronavirus pandemic. So, too, when it said that the justices would question lawyers in order of seniority, foregoing the usual free-for-all that dominates in-person arguments.

That means when the high court dials in for a dramatic legal clash over the fate of American Indian lands in Oklahoma on May 11, it’ll take a while to hear from the justice whose view may count the most: Neil Gorsuch.

The second-most-junior justice, who has sided with tribal interests in a string of decisions since joining the court, likely holds the deciding vote in a criminal case with roots in the infamous Trail of Tears of the 1830s, one with vast implications for criminal, tax, and regulatory power.

Gorsuch was recused when the court seemingly deadlocked last term in straining to answer whether the Muscogee (Creek) Nation’s 19th century-era reservation is still legally intact. The case being argued Monday presents the same key issues but in a different criminal matter from a different court, allowing Gorsuch to assume his central role.

With the parties gunning for his vote, drawing drastically different conclusions from the government’s sordid treatment of tribes throughout history, the case presents what the defendant and his supporters in Indian country see as a potent test of the justice’s commitment to textualist and originalist principles.

Riyaz Kanji, who’ll argue over the phone for the Creek Nation, says the case tests whether the court will honor its precedent requiring clear Congressional intent to undo reservations.

Oklahoma contends that a ruling against it would jeopardize scores of murder and rape convictions and prompt “civil and regulatory repercussions” that “would reverberate for decades.” The state also asserts that upholding the Creek’s reservation rights would leave it powerless to prosecute Indians in Oklahoma’s eastern half, which includes its second-most populous city, Tulsa.

When the eight-member court considered the reservation question last term, it focused more on the implications of its potential decision than on the underlying issue of whether Congress formally “disestablished” the reservation. To do so in line with Supreme Court precedent, lawmakers would have needed to be explicit in breaking the government’s treaty promises, and they weren’t, according to the criminal defendant nominally at the center of that case, Creek citizen Patrick Murphy.

Convicted of murder in state court, Murphy argued on appeal that Oklahoma lacked jurisdiction to prosecute him because his crime took place on reservation land. A law called the Major Crimes Act confers federal jurisdiction for serious crimes involving Indians in Indian country.

That called into focus the question much bigger than Murphy’s case: Does the Creek reservation still exist? That is also central in the appeal of the Seminole Nation’s Jimcy McGirt, also convicted of brutal crimes, who says the state couldn’t prosecute him because he committed them on Creek land.

The Creek Nation was one of the five tribes forced west by the federal government on the Trail of Tears to present-day Oklahoma, along with the Cherokee, Chickasaw, Choctaw and Seminole. The state fears that if the justices rule for McGirt and the Creek, then the other four tribes’ reservations taking up the state’s eastern half along with the Creek’s would also still be intact. 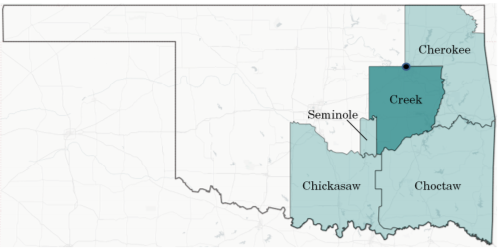 Given the stakes for the Creek Nation, the justices had them argue in Murphy’s case last term, too. The Justice Department also got involved, supporting the state’s concerns that Oklahoma federal prosecutors would be overwhelmed if the state lost jurisdiction to prosecute Indians.

In an effort to show that the government went back on its treaty promises, Oklahoma officials argue that Congress provided for statehood and limited Creek government, so that the state has the power to prosecute Indians for crimes committed on what it says is former Creek land. The officials worry that if the justices rule the Creek reservation persists, then state prosecutors would ultimately lose jurisdiction in the eastern part of the state.

But McGirt observes in his main brief, filed by veteran high court litigator Ian Gershengorn—who also represented Murphy last term—that those legislative moves, whatever their motivations, weren’t explicit enough to undo the reservation. “From these actions Congress did take,” he writes, “Oklahoma would have this Court hold that Congress also undertook disestablishment, even though Congress nowhere memorialized that action in a statute.”

Gorsuch, who was still a Tenth Circuit judge when the Murphy case was there, recused himself from the matter when it reached the high court, and the remaining eight justices, despite a four-lawyer oral argument and rare, post-argument supplemental briefing, failed to decide the case. The justices instead chose to try resolving the issue in this new case, an appeal from Oklahoma state court that presents no conflict for Gorsuch.

Showing how pivotal Gorsuch’s vote will be, legal filings from various parties ahead of the phone argument cite the justice’s opinions in previous cases.

Both sides cite a case involving a 19th-century treaty, 2019’s Wash. State Dep’t of Licensing v. Cougar Den, Inc. The Creek Nation, in its amicus brief, notes that Gorsuch wrote that the court’s job is to interpret treaties as the parties understood them at the time, “not in light of new lawyerly glosses conjured up for litigation a continent away and more than 150 years after the fact.”

Oklahoma officials cite that same Cougar Den language in their filing as cutting against McGirt. Far from showing that the treaty’s original understanding helps him, they argue that it’s his legal team doing the conjuring.

He even brings up a Gorsuch dissent from 2017 over a civil service law, where, believing that his colleagues in the majority rewrote a statute instead of applying it, the justice retorted, “If a statute needs repair, there’s a constitutionally prescribed way to do it. It’s called legislation.”

A former Gorsuch clerk, David Feder, said he can’t comment on this particular case, but he “can say that Justice Gorsuch’s track record demonstrates his willingness to follow the relevant texts wherever they lead, regardless of arguments about Congress’s unexpressed intent or what ruling would purportedly produce the best policy outcome.”

Gorsuch, whose nomination was supported by tribes, seemed to take that approach recently in another context, siding with a criminal defendant who argued he was entitled to a unanimous jury verdict. “In the end, the best anyone can seem to muster against Mr. Ramos,” Gorsuch wrote in Ramos v. Louisiana, “is that, if we dared to admit in his case what we all know to be true about the Sixth Amendment, we might have to say the same in some others.”

In a flourish that McGirt and the Creek Nation might hope the justice replicates here, Gorsuch concluded in Ramos that the court shouldn’t “perpetuate something we all know to be wrong only because we fear the consequences of being right.”

Going the other way, earlier in the term, in an argument over whether a landmark federal statute prohibits discrimination against transgender employees, the justice told ACLU lawyer David Cole, “I’m with you on the textual evidence. It’s close, okay?” But Gorsuch wondered whether, “at the end of the day,” a judge should “take into consideration the massive social upheaval that would be entailed in such a decision.”

Then there’s the question of how Gorsuch reacts to the state’s seeming shift in position this time around. Oklahoma’s lead argument now isn’t that Congress disestablished the reservation—though it still argues that, too—but that there was no reservation to begin with.

Bethany Berger, a leading Indian law scholar at UConn School of Law, said the textualist approach, “which Gorsuch seems to take very seriously, would favor McGirt and the Creek Nation, because there is nothing in the text that suggests that the reservation was supposed to be disestablished, and all of the prior cases setting out the test for determining whether it would be disestablished confirm that.”

She’s supporting McGirt in an amicus brief submitted on behalf of the National Congress of American Indians Fund.

“Another factor that should favor McGirt and the Creek Nation is that this involves abrogation of a treaty,” Berger added. Pointing to Gorsuch’s Cougar Den opinion, she noted the underlying treaties at issue in McGirt “said that this land was a permanent home for the Creek Nation.”

In the end, however, predictions of what justices will do in a given case are “fraught,” said Matthew L.M. Fletcher, professor of law and director of the Indigenous Law & Policy Center at Michigan State University College of Law.

A “true textualist,” Fletcher said, “would think this is a pretty easy case favoring McGirt. Gorsuch so far in his tenure on the Court seems to be as true a textualist as any. But this is a true test of that commitment.”