Elizabeth Holmes, founder and former CEO of Theranos Inc., is accused of wire fraud and conspiracy to commit wire fraud, and is expected to head to trial in August 2020.
Photographer: Michael Short/Bloomberg via Getty Images

Unable to pay her lawyers in an Arizona fraud lawsuit, is defending herself by … phone.

The former chief executive of , who lives in California, appears regularly in San Jose federal court with a team of high-caliber lawyers as her criminal case over the blood-testing startup’s implosion moves toward a trial this year. 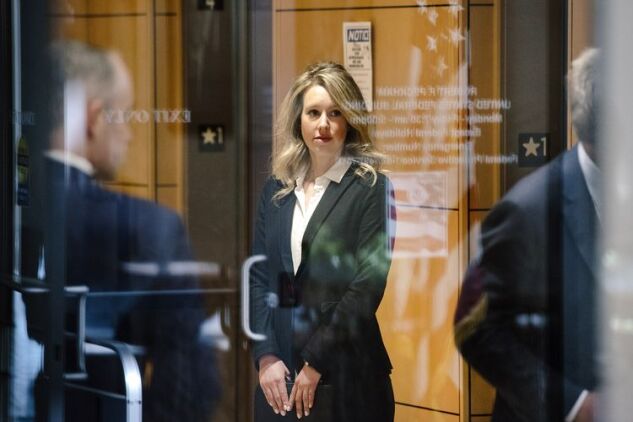 In a less closely-watched civil suit in Phoenix, Holmes dialed into an audio feed for an important hearing Thursday without a lawyer, telling the judge she wouldn’t make any arguments, according to an attorney at the proceeding who declined to be identified discussing sensitive matters.

Her lawyers in the Arizona case quit in September, saying she hasn’t paid them, and it’s highly unusual for a defendant of Holmes’s stature in such a suit to not be represented by an attorney, prompting some speculation on her financial situation.

Following the spectacular collapse of her company, she agreed to a $500,000 fine to resolve a civil brought by federal securities regulators and also settled for an undisclosed sum, on top of whatever legal fees she had to pay that weren’t covered by Theranos’ corporate insurance.

Holmes is probably marshaling her resources for the criminal case, said , a former prosecutor turned defense lawyer who isn’t involved in any Theranos litigation.

“If there’s only so much money to go around, staying out of prison is always priority number one, period,” Portanova said. “Lawsuits seek only money, not imprisonment.”

Holmes, whose net worth was estimated at $4.5 billion before Theranos cratered, hasn’t publicly disclosed any financial hardship. But lawyer , a partner at Cooley in Palo Alto, California, said he was concerned about her finances when he gave notice to the Arizona court that his firm was withdrawing after representing her for almost three years.

“Ms. Holmes has not paid Cooley for any of its work as her counsel of record in this action for more than a year,” Dwyer wrote in the court filing. “Given Ms. Holmes’s current financial situation, Cooley has no expectation that Ms. Holmes will ever pay it for its services as her counsel.”

Dwyer and lawyers at , which is representing Holmes in the criminal case, didn’t respond to emails and phone calls seeking comment.

To retain a criminal defense team from a top-flight firm, Holmes may have been required to make a sizable down payment, according to , a former federal prosecutor who now teaches at the University of Michigan law school.

“It’s possible that she paid Williams & Connolly a large retainer up front that its lawyers are now ‘earning,’” McQuade said in an email.

In San Jose, Holmes is fighting charges that she and former Theranos president , who is also her ex-boyfriend, knew the company’s blood tests were inaccurate and unreliable, and misrepresented the capabilities of the company’s testing machines to doctors, patients and investors. Regulators concluded the blood-testing startup’s technology was a threat to patient health and forced the company, once valued at $9 billion, to shut its labs.

In the Arizona case, customers claim that Theranos, the two executives and the startup’s one-time partner, the drug store chain, took samples of their blood when the defendants knew the blood-testing technology was still in development. As a result, many customers received unnecessary or potentially harmful treatments, or didn’t seek medical help for treatable illnesses, according to the complaint.

At the Thursday hearing that Holmes joined by phone, U.S. District Judge weighed whether the lawsuit should advance as a class action representing potentially tens of thousands of Walgreens and Theranos customers. The hour-long hearing ended without a ruling.

At the start of the session, Holland asked Holmes if she wanted to make any arguments. Holmes responded that she’s relying on the arguments made by lawyers for her co-defendants, according to the attorney at the proceeding.

“It’s possible to try to enjoy the benefits of the defense as presented by co-defendant’s counsel,” Portanova said.

The consumer lawyers, meanwhile, may have their own motivation to continue pursuing Holmes regardless of how much they think she’s currently worth, Portanova said.

“The civil lawyers could simply be making sure that they don’t miss a future opportunity to collect.”