In our “Why Mentoring Matters” series, Helam Gebremariam, Cravath’s first Black woman litigation partner, says she “channeled her inner gladiator” when she arrived in 2008 for her summer associate interview with the firm. The daughter of Ethiopian immigrants shares how she found common ground with her mentor, Cravath litigator Evan Chesler, who grew up “a son of the Bronx.” His genuine interest in her affirmed that she belonged at the firm.

“Never let them see you sweat.”

I closed my eyes and replayed the countless times my parents had repeated that refrain. I smoothed my navy suit, fixed the collar on my blouse, took a long deep breath, and entered Worldwide Plaza in Manhattan for the first time. The lobby alone was unlike anything I had ever seen—the white marble stretched for what seemed to be an eternity, and the ceilings were taller than most New York City brownstones. I channeled my inner gladiator and confidently approached the reception desk.

“I’m here for my Cravath interview,” I said.

How was I actually feeling? Intimidated, to put it mildly. I entered those storied Cravath halls as the daughter of Ethiopian immigrants, a first-generation college and law student, and a young Black woman, eager to pursue a career in Big Law, but concerned that many firms, including the one at which I was interviewing, had no Black women in their partnerships at the time.

I knew I needed a mentor—a guide, a confidante, a sponsor—but how do you find a mentor in an industry where few like you have achieved what you hope to? Would there be a sign? Little did I know, I was about to find out.

I met with eight Cravath partners and associates that day. Each shared what initially attracted them to Cravath (the training, the collegiality, the people) and what ultimately kept them there (the diverse client base, the intricacies of legal issues, the trials.)

With each conversation, I slowly began to picture myself—my life—as a Cravath litigator. I was eager, motivated, and truly inspired. Before I knew it, it was time for my final interview of the day.

“We’d like you to meet with our presiding partner, Evan Chesler, ” the director of legal recruiting said.

I took another long, deep breath.

Evan’s reputation preceded him. Like any diligent interviewee, I had walked into Cravath that day having researched his impressive list of clients, his extraordinary complex civil trial experience (now 49 trials and counting), and his catalog of awards. 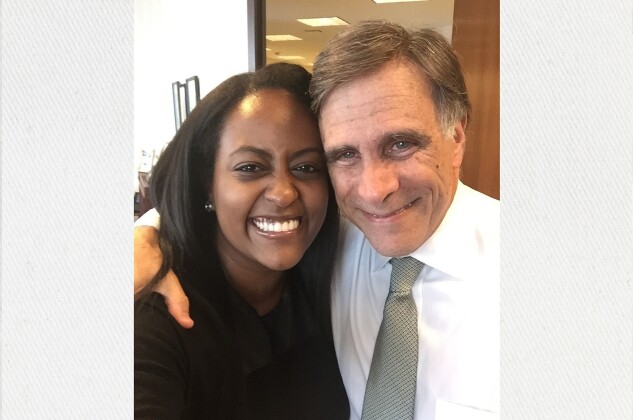 But once I entered his office, I learned that Evan didn’t want to talk about any of that. Instead, he wanted to talk about me—what inspired me to be a lawyer, what I was hoping to accomplish in my legal career, and how I was enjoying my time at his alma mater, NYU Law. Those questions would set the stage for a career-long mentoring relationship.

I began to share a bit about my own story: about the premium my parents placed on education; about the sacrifices they made to ensure that my sisters and I were afforded every opportunity to succeed in their new homeland; and about the life-changing full-tuition scholarship for first-generation law students I had received to attend NYU Law—the AnBryce Scholarship.

It was in that moment that Evan shared that he too was a first-generation law student. A self-proclaimed “son of the Bronx,” Evan spent his high school summers selling hot dogs in Yankee Stadium, and also attended NYU Law on scholarship. From those humble beginnings, he became one of the country’s leading litigators, a trusted counselor to CEOs and general counsel across industries, and, by the time I met him, presiding partner of Cravath.

Affirmation That I Belonged

I went on to spend my 1L and 2L summers at Cravath, and returned as an associate following graduation and a federal clerkship. I worked closely with Evan upon my return, and learned first-hand the importance of mastering the facts of a case, advancing creative legal arguments, and tailoring your arguments, and style, to your audience. I borrowed elements of what I learned from Evan, and the other incredible litigators with whom I have had the opportunity to work at Cravath, and began to shape my own style of advocacy—one that felt authentically me.

In the years since that interview, I have come to rely on Evan time and time again for his advice, his feedback, and his wisdom. He has afforded me professional opportunities, introduced me to clients, and served as a sounding board on myriad legal issues and litigation strategies.

Evan, together with my many other Cravath mentors, celebrated and championed my election as a partner in 2020. And this past summer, as I examined an expert witness during my first trial as a partner—one I co-led with several partner colleagues—it was Evan who was seated to my side listening intently and nodding along proudly.

It may come as no surprise that Evan and I look nothing alike. Or that our stories, while similar in ways, are also fairly distinct. But from Evan I’ve learned not only how to be a zealous and effective advocate for our clients, but also how mentorship can begin with something as simple as affirming that someone belongs.

Helam Gebremariam is a Cravath partner in New York whose practice focuses on antitrust litigation, contractual disputes, securities and shareholder derivative suits, and investigations. She joined Cravath as an associate in 2011 and later served in the DOJ. She rejoined Cravath in 2019, was elected partner in 2020, and is Cravath’s first Black woman litigation partner.