A painting of George Floyd stands behind a group of people gathered on June 2, 2020, at a memorial on the block where he was killed by police in Minneapolis.
Photo by Stephen Maturen/Getty Images

In the Minneapolis neighborhood where a police officer murdered , post-verdict celebrations this week gave way to the daunting civic challenge that remains: reimagining public safety in a scarred city.

Activists still occupy several blocks around the Cup Foods market made infamous by ex-cop Derek Chauvin’s fatal restraint of Floyd. The zone is largely free of law enforcement, and city officers have refused to answer some 911 calls from the surrounding Powderhorn community. Now, residents grapple daily with an experiment of life without police.

Summer Grimes, a 38-year-old who works in digital design, was mugged in October, right outside her house three blocks from the scene of Floyd’s death. A few teenagers went through her pockets, but there was nothing to take. When she called out, they got into a car and drove away. “It didn’t even occur to me to get law enforcement involved,” she said, “because I had my neighbors.”

Almost a year after Floyd’s death ignited protests and calls for racial justice nationwide, a few states and cities have fundamentally changed police powers by stripping them of their so-called qualified immunity from lawsuits. But most statehouses and city halls have resisted activists’ demands, instead opting for modest adjustments that so far have done little to stop police from killing people. 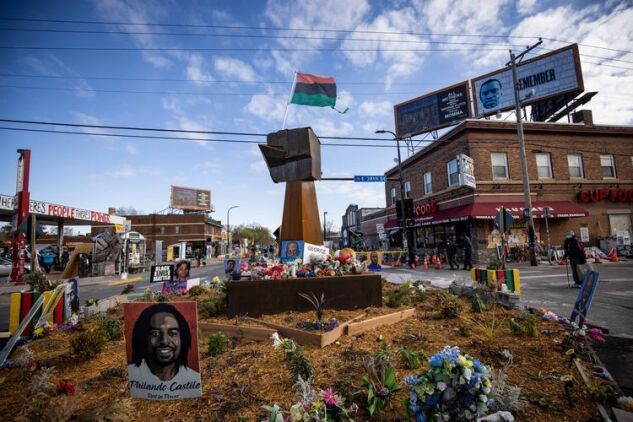 “States are moving in the right direction to understand that it’s their responsibility to pass policing legislation, but the legislation they’re passing is insufficiently comprehensive,” said Barry Friedman, founding director of New York University Law School’s Policing Project. “You can’t ban chokeholds and think you’ve fixed use of force. You can’t ban no-knock warrants and think you’ve eliminated the problem with SWAT raids.”

According to a Washington Post-ABC News poll, six in 10 Americans think the U.S. should do more to hold police accountable for mistreatment of Black people, far outpacing concerns about those measures interfering with how law enforcement does its job.

Chauvin was convicted of second-degree murder Tuesday and faces decades in prison. The videotaped death on May 25 ignited a summer of rage that represented the greatest U.S. racial reckoning since the 1960s, and focused attention on decades of unpunished killings of Black people.

Police have shot and killed at least eight Minnesotans this year and 274 people across the U.S., according to a database maintained by The Washington Post. At least 100 have died just since March 8, when proceedings in Chauvin’s trial began.

They included 16-year-old Ma’Khia Bryant in Columbus, Ohio; 13-year-old Adam Toledo in Chicago, and Daunte Wright, who was killed during a traffic stop in suburban Brooklyn Center, Minnesota, not far from where Floyd died.

Finding the right balance remains a key challenge. Overpolicing of minor offenses can create hostility between communities and police, but deliberate underpolicing can erode trust and threaten safety. In the summer following Floyd’s death, the average response time to the most urgent calls went up about 40% across Minneapolis compared with January of that year, according to a Bloomberg CityLab analysis.

So far this year, violent crime has increased 21% in Minneapolis over a similar period in prepandemic 2019, but by 66% in Ward 9, where Cup Foods is located, according to police department data.

Immediately after Chauvin’s guilty verdict, Mayor spoke of the area around the corner store -- renamed George Floyd Square -- as a place of healing. But he also pointed to the increase in violence as a reason the intersection should be reopened.

“There’s violence. We’re not in denial of that, but our city council members are not going to solve that,” said Julia Eagles, who has lived blocks from the square for a decade. “Is all of this going to change when they reopen the streets? It’s just been an easy scapegoat.”

People embrace after the verdict is announced in the trial of former Minneapolis police officer Derek Chauvin at George Floyd Square in Minneapolis, Minnesota on April 20.
Photographer: Christian Monterrosa/Bloomberg

Junita Flowers, who runs Junita’s Jar, a cookie store in the square, said she felt less safe as summer waned. She said activists occupying the square have been trying to create a peaceful environment, but that outsiders came to commit crimes. Flowers has had windows broken and guns fired into her shop. Employees quit out of fear, but she doesn’t think bringing police into the fray is the solution.

The city’s department didn’t respond to requests for comment, but has previously said that the force is understaffed after more than 100 departures. Its long-term fate is an open question. U.S. Attorney General said this week that the Justice Department would investigate its practices, which could result in a settlement that would require reforms.

An initial plan to disband the department and start fresh ran into procedural roadblocks last year, but has been revived in new form. The city council didn’t satisfy critics who demanded that it defund the agency, but reallocated overtime funds into alternate responses to crime. The Minneapolis Office of Violence Prevention has sent paid violence interrupters to the square itself, and partnered with a volunteer patrol called the Agape Movement, composed of men from the community who de-escalate incidents.

Thirty-eight states have passed more than 100 police reform laws since May 2020, according to the National Conference of State Legislatures. The changes range from modernizing training to limiting or ending qualified immunity.

Ballot measures in cities such as Portland, Oregon,and Columbus created citizen advisory boards; Akron, Ohio has mandated the release of dashboard and body-cam recordings after use-of-force incidents; Philadelphia ended stop-and-frisk tactics that have landed heavily on the poor.

“We’re still too early to say whether or not all these things -- individually or collectively -- have moved the needle,” said Tracie Keesee, a co-founder of the Center For Policing Equity in New Haven, Connecticut.

One of the strongest mechanisms to curb police abuse is ending the legal doctrine called qualified immunity, advocates say. In many states, officers can’t be held liable in civil suits if they exercised their authority in “good faith” -- even if they violated someone’s rights.

Since June, Colorado and New Mexico outlawed the defense, as has New York City. Sixteen other states are considering abolishing or minimizing it, according to the Innocence Project. A federal measure, in a policing bill named for George Floyd, has stalled in the Senate.

Even before Floyd’s death, Minneapolis demonstrated the difficulty of changing how police interact with the public. The city had updated its use-of-force policy in 2016, with a focus on preserving the “sanctity of life.” Neck restraints, like the one Chauvin used on Floyd, were allowed only in extreme cases. Chauvin had had more than a dozen complaints filed against him previously, but hadn’t been disciplined.

Meanwhile, residents in the neighborhood surrounding the square are attempting to go without police at all. “We take care of each other,” Eagles said.

Eagles conceded that crime is up, but said she’s comfortable with the community’s grassroots effort and excited by its potential. She said she feels safer under the watch of her neighbors rather than the local police or U.S. Justice Department.

“Nobody is going to come save us from this situation,” Eagles said. “It has to be that long-term work and us rising to this moment.”

(Updates with poll in sixth paragraph.)

To contact the reporters on this story:
in New York at fakinnibi1@bloomberg.net;
in San Francisco at sholder6@bloomberg.net