Wachtell, Lipton, Rosen & Katz and Kirkland & Ellis have advised on the largest volume of deals in the first half of 2019, in a cycle dominated by “mega deals” worth over $10 billion.

In newly released M&A legal advisory league tables by Bloomberg, Wachtell worked on the highest dollar amount of global deals as principal advisor in the first two quarters of the year. The firm also topped the rankings for global announced deals by volume, a broader metric that includes specialized deal-related work like antitrust or executive compensation.

As principal, Wachtell advised on 32 deals worth more than $436.7 billion, including four out of the top five mega deals announced in the first half of the year.

And just last week the firm advised Botox-maker Allergan plc in its $63 billion sale to AbbVie Inc., which was advised by Kirkland.

In addition to its work on the Celgene/Bristol-Myers Squibb and AbbVie/Allergan deals, Kirkland also advised on Danaher Corp.’s $21.4 billion acquisition of General Electric’s biopharma division. 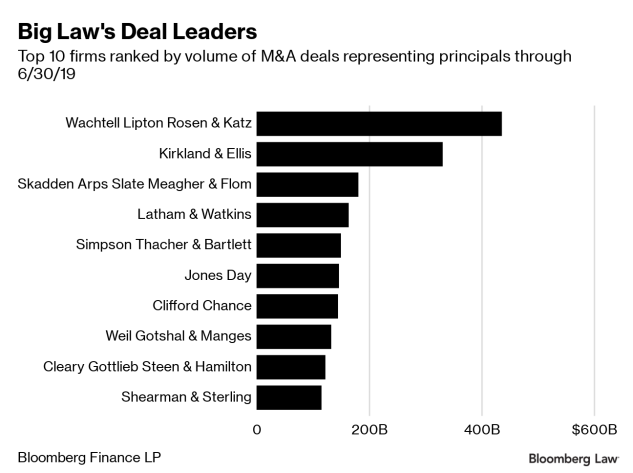 Global M&A activity over the first half of 2019 reached $1.9 trillion, with the average deal size at $90.6 million. But deal volume isn’t necessarily an indicator of overall M&A market health.

Much of the market in the first half of the year was dominated by “mega deals, ” with the middle of the market slowing down considerably over last year.

“If you take away the mega deals,” said Bloomberg Law legal analyst and former corporate transactions lawyer Diane Holt, “and just compare them to previous years, you would say that the market is way down.”

“It’s been an interesting stretch because the M&A market definitely felt different than the first six months of last year, for sure,” said Alan Klein, co-head of Simpson Thacher’s M&A practice.

The first half of last year was a “blow-out” period for the firm and the market, where buyer and sellers were eager to move ahead as fast as humanly possible, but by the fall that fever started to abate somewhat, Klein said.

A market break in December, the government shutdown earlier in 2019 and the trade wars and tariffs reshuffled a lot of thinking in terms of what business prospects are and what expenses are going to be, Klein added.

“I think the market been choppy as a result and there has been a little more uncertainty around what the direction of the economy is, what the real underlying costs are going to be and so I think there’s an element of caution that’s been interjected into the market,” he said.

“Mega deals are more idiosyncratic, meaning they tend to be driven by strategic imperatives, company to company or specific industry dynamics as opposed to macro factors,” Schiele added. 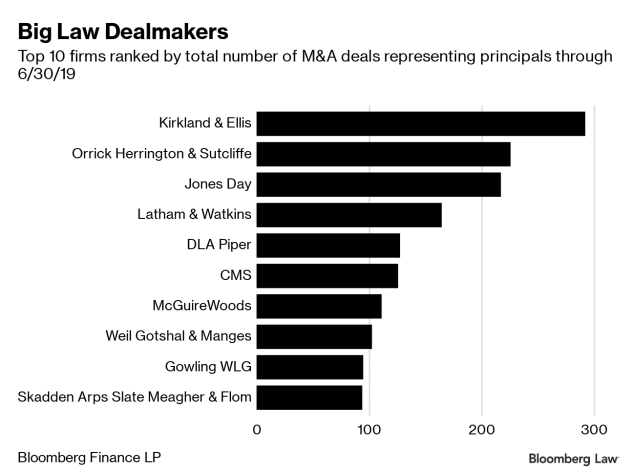 First is the camp of law firms, led by Wachtell, that are doing deals that are on average worth billions of dollars more than most deals other firms do.

“The business model for those law firms is to be able to put together a very large team of lawyers who can execute on a deal where they can’t make a mistake,” Holt said.

In the other group are law firms like Kirkland, Jones Day and Latham & Watkins whose average deal size is around or below $1 billion but their law firm model is all about efficiency, Holt said.

“I think that’s one of the key strengths of the firm is that we have an infrastructure and team that is well-equipped to handle the full range of the M&A market,” said Kirkland M&A partner Daniel Wolf.

Other law firms might be overly focused on one or some parts of the market range, but Wolf said Kirkland has built its practice differently. According to Wolfe, the firm has excelled working along the spectrum, from midmarket, to bulge bracket private equity, to run of the mill public company M&A and, more recently, to mega deals.

He noted the firm is hiring and training people to handle deals in every part of the market, so it can weather fluctuations and avoid becoming overly reliant on mega deals.

“That has been a huge part of our strategy, playing every part of the market so that regardless of where the strength is in the market at that time, we’re there,” Wolf said.

To contact the reporter on this story: Meghan Tribe in New York at mtribe@bloomberglaw.com