Alaska’s Tongass National Forest—America’s largest—is no longer protected under the 2001 Roadless Rule, and its remote islands and old-growth trees are now open to new logging and mining, according to a record of decision to be published Thursday in the Federal Register.

In its final decision to exempt the Tongass from roadless area protections, the U.S. Forest Service—part of the U.S. Department of Agriculture—said it’s acting against overwhelming public opposition to ending protections and instead heeding the will of Alaska public officials.

The decision is expected to be swiftly challenged in court, and no activity is expected prior to the end of President Donald Trump’s first term. A new Democratic administration likely would undo the decision, which is subject to the Congressional Review Act. 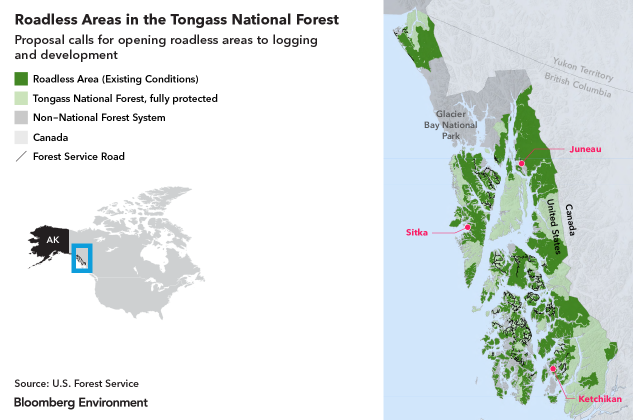 The 16.8 million-acre Tongass is the world’s largest remaining coastal temperate rain forest. Scientists say it’s essential to maintaining a stable climate because its old-growth trees store large amounts of carbon that could be released into the atmosphere if they are logged.

The Forest Service considered six possible options for reducing the Tongass’ protected area, including options that would maintained some protections while allowing new logging and mining. The agency said it avoided the “environmentally preferable” alternative and chose to drop all protections, despite public outcry.

According to an internal document, 96% percent of the public comment letters the agency received supported maintaining roadless protections.

The Forest Service didn’t immediately respond to a request for comment Wednesday about its rationale nor what the next steps may be toward new development in the Tongass.

Sen. Lisa Murkowski (R-Alaska), one of the most vocal opponents of roadless protections for the Tongass, also didn’t immediately respond to a request for comment. She said in September that opening up the Tongass to new development would help Southeast Alaska build “a more sustainable economy.”

“A full exemption from the Roadless Rule is about access—access to recreation, renewable energy, and more,” Murkowski said at the time.

Sealaska Corp., which has timber interests in the Tongass, also didn’t immediately respond to a request for comment. But spokesman Matt Carle said in September that local community and tribal priorities should drive forest management following the roadless decision.

The state of Alaska petitioned the agency to exempt the Tongass from the Roadless Rule. Trump in 2019 demanded that Agriculture Secretary Sonny Purdue grant the exemption after Trump met with Alaska Gov. Mike Dunleavy (R).

Dunleavy’s office didn’t immediately respond to a request for comment, but said in a September statement that the Roadless Rule imposed an “unfair” burden on Alaska. He thanked Purdue for “proposing a reasonable accommodation for Alaska.”

Conservation groups say a court challenge should come soon, but their strategy to reverse the decision will depend on the outcome of the election.

“It’s a devastating blow, this decision,” said Ken Rait, public lands project director for Pew Charitable Trusts, a conservation group. “It’s devastating because more than 95% of the people who commented wanted the roadless protections to remain.”

“The next steps are frankly going to depend depend on what happens next Tuesday,” Rait said. “There’s no doubt litigation will be filed.”