and confronted by a growing number of people who say they were assaulted or harassed while using the ride-hailing platforms, have touted their commitment to keeping passengers safe by enacting new screening protocols and releasing data on incidents.

But in defending dozens of civil lawsuits in court, the companies can claim they’re not responsible for criminal incidents “outside the scope of the employment relationship,” in part because they consider their drivers independent contractors. That distinction is part of the complex balancing test used in cases involving employer liability for negligence and other civil claims.

A Bloomberg Law analysis of court records show there were 22 personal-injury civil lawsuits filed against Lyft in state courts last year, after seven total in 2017 and 2018. Uber was sued 11 times in state court in 2019 and 10 in 2018, which doubled previous year totals, the analysis found. These cases include claims seeking to hold the companies liable for assaults because of negligent hiring and supervision and false promises of safety.

In federal courts, there have been at least 30 cases filed against Uber under similar charges since 2014. Lyft hasn’t faced federal lawsuits making such claims, according to court records.

The increase in lawsuits comes as San Francisco-based Uber and Lyft—both of which went public last year—and other gig-economy companies fight to keep their contractor-based business models, saying their labor costs would rise 20 to 40 percent if they’re forced to pay overtime and minimum wage under federal labor laws covering employees. The companies are battling a new law in California, known as Assembly Bill 5, or A.B. 5, that defines a rigid standard for classifying workers as contractors and has inspired other states to look at similar proposals. 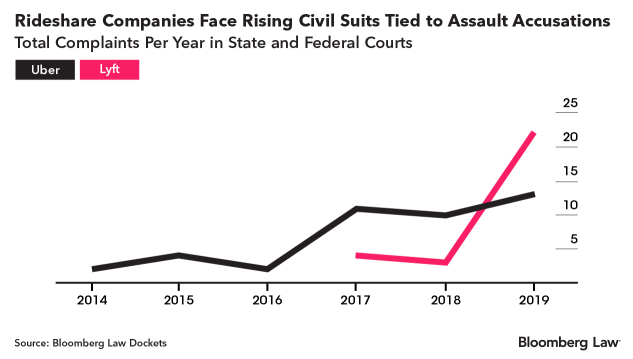 Being forced to treat drivers as employees could mean that alleged victims would have an easier time in court holding them accountable for damages and responsibility for the reported rapes, murders, accidents, and assaults, employment attorneys and academics say—though employers aren’t automatically responsible for the behavior of their workers. The lines become particularly blurred when clashing with innovative models that allow workers to set their own schedules and use their own vehicles.

“Listen, if the drivers were employees, and they knew they would be on the hook for every single incident, then I’m sure they would practice very differently and prioritize safety,” said Michael Bomberger, an attorney representing alleged victims against both companies.

Uber didn’t respond to several requests to comment on Bloomberg Law’s analysis or its tactics in court. In response to a request about specific lawsuits, a spokeswoman said the company doesn’t respond to ongoing litigation.

Lyft spokeswoman Ashley Adams said in an emailed statement, “We know that our work on safety is never done, and we will continue to work towards our goal of making Lyft the safest form of transportation for our community.” Adams didn’t address directly the company’s legal arguments.

The lawsuits filed since 2014, in Uber’s case, and since 2017 against Lyft accuse them of not investigating passengers’ complaints and creating an unsafe atmosphere. The lawsuits typically seek damages and demand the companies toughen the way drivers are monitored and screened before hiring. Suggested changes include fingerprint-based background checks and video recordings of rides.

In a recent case, a Georgia woman accusing Uber of not investigating her claim of an attempted assault details the company’s public statements about taking sexual misconduct seriously. The lawsuit says Uber advertises itself as a safe option for customers, particularly those who are intoxicated, but doesn’t take appropriate steps to protect them.

“If only Uber walked the walk instead of just talking the talk,” the lawsuit says. Uber hasn’t yet filed a response in that case.

Several lawsuits against Lyft recently filed in markets including Seattle, Miami, San Diego, and New Orleans accuse the company of failing to enact basic safety measures that would have prevented alleged assaults. After the women reported the attacks, Lyft didn’t follow up on their complaints or played down the seriousness of what happened, the suits claim. Four of the women, each identified only as Jane Doe, say they were raped by their drivers in their own homes.

In state courts, where most claims against both companies are filed, about half of the closed cases have ended in arbitration, were settled, or were dismissed by request of the accusers. Most of the cases against Lyft are still pending and haven’t had a firm determination on the merits. 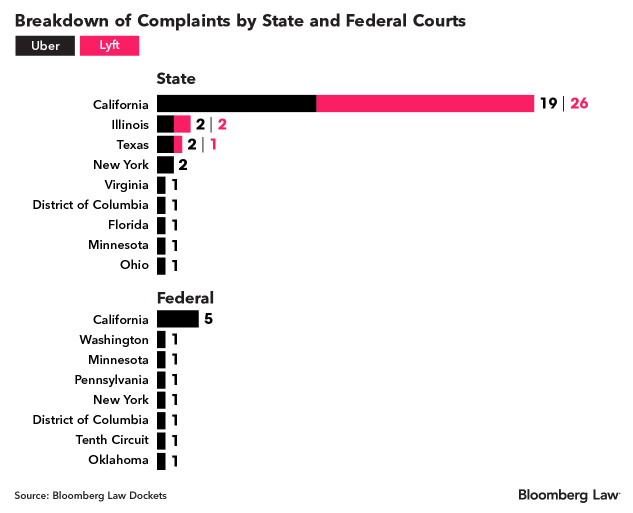 Judges who have issued rulings in the handful of federal cases against Uber largely haven’t been swayed by the contractor defense. Rather, they took into account how much the company could have reasonably prevented such activity and what the riders’ reasonable belief was about whether the driver worked for the companies.

Judge in D.C. federal court, ruling in a case stemming from a 2015 stabbing, said that whether the driver was an employee or contractor was irrelevant. He said negligence should be analyzed as if he was an employee, and, therefore, the company had a duty to use reasonable care in hiring, training, and supervising these drivers. He acknowledged in this case that the issue would raise questions about “growing pains of twenty-first-century economics.”

“Courts must now determine what is to be done about the risk of that old-fashioned danger in a market shaped by new players and new technologies,” Boasberg wrote in his opinion. The case was later voluntarily dismissed by the plaintiff.

In 2016, a San Francisco federal judge rejected the company’s claim that it can’t be blamed for misconduct by drivers because it classifies them as contractors. That lawsuit, filed on behalf of multiple alleged victims, centered around a Boston woman’s claim that an Uber driver assaulted her after he dropped her off, and another South Carolina woman who said a driver detoured from the route to her home to “viciously rape her.”

Judge of the U.S. District Court for the Northern District of California said the court couldn’t conclude whether the drivers were independent contractors or employees or whether the criminal activity allegedly occurred outside the scope of employment. The court stated that “assaults of this nature are exactly why customers would expect taxi companies to perform background checks of their drivers.” She allowed the women to move forward with their complaints, and the case later settled.

In another case in the same court, Judge said that a sexual assault of a passenger by a driver posing as an Uber driver wasn’t an outgrowth of workplace responsibilities of the driver, conditions, or events. She acknowledged the decision veered from Illston’s previous ruling at this stage. Corley cited previous case law that says that a hospital can’t be held liable for actions of employees acting out of the scope of their duties.

That case is ongoing and will have a hearing in March.

Uber has announced actions to protect its passengers, most recently with a new way for riders to report if they feel unsafe on a trip. It released its own study showing more than 3,000 assaults during its rides in 2018 in the U.S., with nine people murdered and 58 killed in crashes. Since 2018, the company said it blocked more than 40,000 people from driving.

It previously ended its mandatory arbitration program for assault victims. Uber didn’t respond to Bloomberg Law’s request for comment, but its Chief Legal Officer Tony West has said safety is a top priority. Their website details safety protocols in place for drivers, as well as passengers, developed in recent years.

Uber’s revenue rose 25.8 percent to $14.2 billion last year and said it expects to turn its first profit, on an adjusted basis, by the fourth quarter of this year—a turnaround that has been aided by efforts to cut expenses. Lyft’s revenue rose 67.7 percent to $3.6 billion and has projected an initial profit in late 2021.

Even if the drivers were considered employees, the companies may still not be liable, said Myrna Maysonet, an attorney with Greenspoon Marder who represents employers. If someone raped someone at work, the employer wouldn’t be liable unless it had information that the person had a propensity for such acts. States have various standards, as well. She said it depends on the circumstances.

“The more proactive you are, the less negligent you are. If you hire someone to be your driver, and that person kills people, should you be responsible for that? Why should you be liable?” Maysonet said. “If you hire someone who has a record of drinking-while-intoxicated charges against him and he kills someone in an accident, you could be liable.”

Whether drivers are employees or contractors matters very little for most claims, said attorney Bill Levin, who represents women in liability cases against Lyft and Uber.

“You have to conduct your affairs with reasonable care to avoid hurting other people. If your business ends up being a platform where women get assaulted and you don’t do anything, you have to do something to minimize the risk,” Levin said. “You can’t say it’s fine if they get sexually assaulted because they aren’t employees.”