Former president sued to block the release of documents to the U.S. House select committee investigating the Jan. 6 attack on the U.S. Capitol, arguing that lawmakers have made an over-broad request for presidential records.

“The committee’s requests are unprecedented in their breadth and scope and are untethered from any legitimate legislative purpose,” Trump said in the complaint.

The White House said last week that it wouldn’t support Trump’s efforts to block the National Archives from turning over the tranche of records to Congress.

The select committee’s chairman, a Mississippi Democrat, and , a Wyoming Republican and the panel’s vice chair, responded in a statement that “precedent and law are on our side.”

“The select committee’s authority to seek these records is clear,” they said. “We’ll fight the former president’s attempt to obstruct our investigation while we continue to push ahead successfully with our probe on a number of other fronts.”

The committee, made up of seven Democrats and two Republicans, has already subpoenaed documents and testimony from former Trump advisers, including political strategist and former White House Chief of Staff . In addition, the committee asked the National Archives to turn over White House documents provided to Trump or Meadows with terms such as “rigged” election or “stealing” the election. 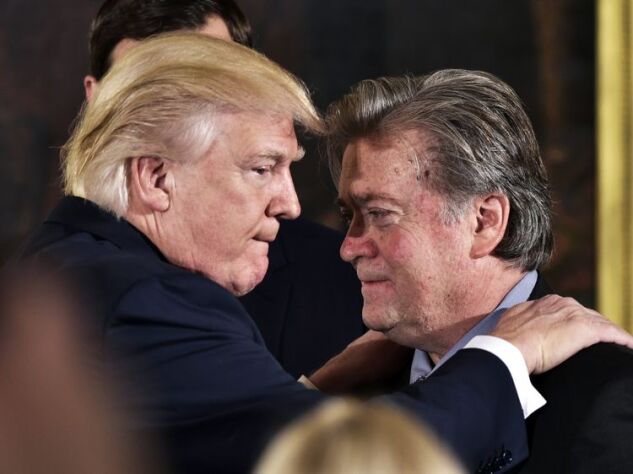 Donald Trump (L) congratulates Stephen Bannon during the swearing-in of senior staff in the East Room of the White House on January 22, 2017 in Washington, DC.
Photographer: MANDEL NGAN/AFP

Bannon has refused to comply, with his lawyer saying he wouldn’t cooperate until the committee and Trump reached a deal on the former president’s privilege claims.

The committee is set to vote Tuesday night on sending a criminal contempt report against Bannon, who helped run the 2016 Trump campaign and worked in the White House until 2017, to a full House vote.

In a letter Monday, obtained by Bloomberg News, Deputy Counsel to the President Jonathan Su wrote that an assertion of privilege with regard to conversations Bannon had with the former president or White House staff after he left the administration isn’t justified and “is not in the public interest.”

“At this point we are not aware of any basis for your client’s refusal to appear for a deposition,” Su said in the letter.

The committee’s request included all documents and communications tied to Trump’s public comments on Jan. 6, as well as records associated with any other public remarks he made between the election on Nov. 3 and the inauguration on Jan. 20. The panel also requested all photographs, videos and other media, including any digital time stamps, taken or recorded within the White House that day, as well as visitor logs.

Such a broad request would “destroy the very fabric of our constitutional separation of powers and invade fundamental privileges designed to maintain the autonomy and functioning of the executive branch,” Trump said in the complaint.

In a statement following the filing of the complaint, Trump spokesman Taylor Budowich said on Twitter that the lawsuit was filed “in defense of the Constitution, the Office of the President, and the future of our nation, all of which the sham Unselect Committee is trying to destroy.”

The White House had no immediate comment on the lawsuit.

Trump’s lawsuit is the latest chapter in a long-running legal battle over the Jan. 6 riot. Separately, Thompson and a coalition of congressional Democrats have sued Trump in federal court in Washington, accusing him of inciting the violence at the Capitol. Trump is also facing a civil suit from police officers who clashed with rioters on Jan. 6.

Thompson has said the panel would look into events at the White House on the day of and after the riot, which occurred as Congress was meeting to certify ’s victory in the 2020 presidential election.

Members of the committee have made clear that Trump’s activities that day are a central focus of their inquiry.

In the months since the riot, the Justice Department has filed criminal charges against hundreds of the individual protesters who stormed the Capitol.