A Palm Beach Police officer at the entrance of former US President Donald Trump's house at Mar-A-Lago in Palm Beach, Florida, US, on Tuesday, Aug. 9, 2022.
Photographer: Eva Marie Uzcategui/Bloomberg

The Justice Department said it developed evidence that White House records held in a storage room at Florida home may have been concealed or removed before a June FBI visit to collect classified documents, suggesting possible attempts to obstruct the investigation.

The government made the assertion in a filing late Tuesday night. The document gives the public the clearest reasoning yet for the unprecedented search of Mar-a-Lago two months after the FBI’s earlier visit to the property, which was carried out pursuant to a May 11 grand jury subpoena.

“The FBI uncovered multiple sources of evidence indicating that the response to the May 11 grand jury subpoena was incomplete and that classified documents remained at the premises,” the DOJ said in the filing. 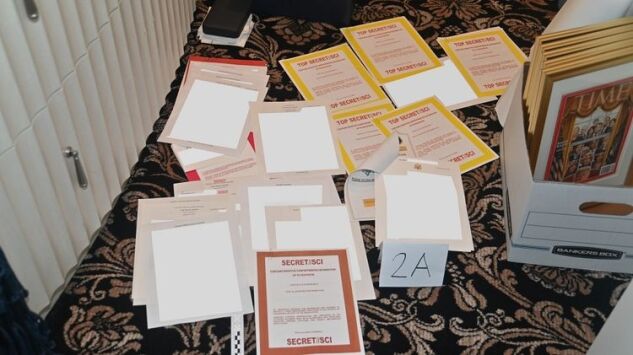 WATCH: A US Department of Justice filing says White House records held in a storage room at Donald Trump’s Florida home may have been concealed or removed before an FBI June search.
Source: Bloomberg

The filing was a response to Trump’s lawsuit seeking the appointment of a neutral third-party expert to review materials taken from Mar-a-Lago on Aug. 8 by FBI agents searching for highly sensitive White House records. US District Judge scheduled a hearing for Thursday to hear arguments on Trump’s request.

Trump’s response to the DOJ filing focused on a photograph that was included in an exhibit to the document on Tuesday night, showing documents with classified markings that had been seized from his office at Mar-a-Lago.

“Terrible the way the FBI, during the Raid of Mar-a-Lago, threw documents haphazardly all over the floor (perhaps pretending it was me that did it!), and then started taking pictures of them for the public to see. Thought they wanted them kept Secret? Lucky I Declassified!” Trump said on social media.

The DOJ said that even after Trump’s lawyers certified in June that they’d performed a thorough review for such material, FBI agents were able to seize more than 100 additional classified documents during their August search. They said there was evidence “government records were likely concealed and removed” from a storage room at Mar-a-Lago and “efforts were likely taken to obstruct the government’s investigation.”

It also includes a striking photo of classified materials strewn on the floor of Mar-a-Lago amid the FBI’s search.

The filing lays out a timeline for the judge on efforts to retrieve the documents. The National Archives and Records Administration had ongoing communications with the former president throughout 2021, eventually receiving 15 boxes in January, the DOJ said.

After a referral from the National Archives, the FBI got a look at the documents in May, determining that there were hundreds of classified documents, including 25 marked as top secret.

“Through its investigation, the FBI developed evidence indicating that even after the fifteen boxes were provided to NARA, dozens of additional boxes remained at the premises that were also likely to contain classified information,” the department said in the filing Tuesday.

The Justice Department got a grand jury subpoena and sent that to Trump’s lawyers in May. The lawyers requested a delay and then in June told the FBI to pick up the documents at Mar-a-Lago. While there, they were given “a single Redweld envelope, double-wrapped in tape, containing the documents” and a letter from Trump’s lawyer certifying that all relevant documents were produced.

The agents were allowed to look at the storage room that the lawyer said all of the documents came from, but were not allowed to open or look inside any of the boxes that remained in the room, the government said. The FBI determined that what they had been handed at that time were 38 documents with classification markings, including 5 marked confidential, 16 marked secret and 17 marked top secret.

“Counsel for the former President offered no explanation as to why boxes of government records, including 38 documents with classification markings, remained at the premises nearly five months after the production of the fifteen boxes and nearly one-and-a-half years after the end of the administration,” the government said.

On Aug. 8, after convincing a federal magistrate judge they had probable cause, FBI agents executed a search warrant, seizing another 33 “items of evidence, mostly boxes.” Three classified documents were found in the desks in the “45 Office,” the government said. The results of the search suggest that Trump’s team hadn’t been as cooperative as they claimed. 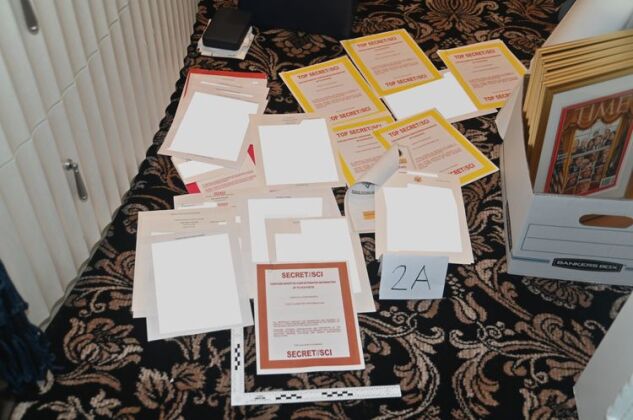 “That the FBI, in a matter of hours, recovered twice as many documents with classification markings as the ‘diligent search’ that the former president’s counsel and other representatives had weeks to perform calls into serious question the representations made in the June 3 certification and casts doubt on the extent of cooperation in this matter,” the DOJ said.

Trump claims some of the documents are protected by attorney-client privilege and executive privilege. But the government responded that documents pertaining to sensitive communications about legal advice between a lawyer and a client have already been set aside.

In a footnote to the filing, the DOJ rejected Trump’s public claims that FBI agents had improperly seized his passports, which were found in “a desk drawer that contained classified documents and governmental records commingled with other documents.”

“The location of the passports is relevant evidence in an investigation of unauthorized retention and mishandling of national defense information; nonetheless, the government decided to return those passports in its discretion,” the DOJ said in the filing.

The dispute over privileged material is separate from whether Trump broke any laws by taking hundreds of classified documents -- some of them marked top secret -- from the White House after leaving office. Still, Trump could theoretically attempt to use claims about privilege to try to delay or undermine the probe or any potential future criminal case by alleging that investigators had handled documents they were not legally allowed to see.

So far there is no evidence that that has happened.

Cannon has directed Trump to respond to the DOJ filing by Wednesday night. Cannon, a Trump appointee, issued a preliminary order over the weekend saying she is leaning toward granting the former president’s request for a special master.

The Justice Department said any such appointment was unnecessary and would delay the ongoing investigation of Trump’s retention of highly classified documents at his home. An appointment of a special master would also impede the intelligence community from conducting its review of national security risks that improper storage of the highly sensitive materials may have caused, the department said.

Trump has denied wrongdoing and offered a variety of explanations for the presence of classified documents at his home, including that he had a “standing order” to declassify records he took and that FBI agents may have planted evidence during the search.