President Donald Trump has filled 20 percent of the nation’s federal appeals seats in his swift bid to reshape the judiciary with strong conservatives, and the emphasis could soon shift to accelerating district court confirmations.

The appeals court milestone was underscored with Neomi Rao’s confirmation on Wednesday to the seat on the U.S. Court of Appeals for the District of Columbia Circuit that was vacated by Trump’s second Supreme Court appointment, Justice Brett Kavanaugh.

With the help of the Republican-led Senate, Trump now has seen 36 of his appeals nominees win confirmation in a little over two years. That translates into a hair over 20 percent of 179 appellate seats.

Trump is outpacing his recent predecessors and is living up to one of his key campaign promises.

The appointees are “excellent choices,” and the Trump administration deserves credit along with Senate Republicans for making them a priority, said Carrie Severino, chief counsel and policy director of the Judicial Crisis Network.

“It’s a treadmill. It’s on automatic pilot, and everyone gets to go through. Particularly at the circuit court level,” said Sen. Sheldon Whitehouse, a Rhode Island Democrat and Judiciary Committee member. 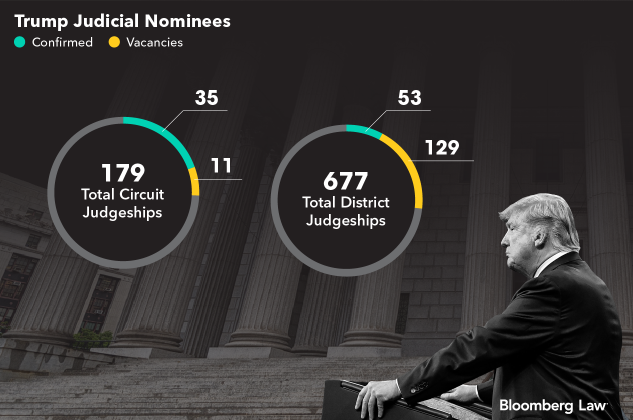 Democrats criticize many of Trump’s appellate picks for lacking bipartisan support or for having ties to conservative organizations. They and others also have called him out for a field of circuit court nominees that lacks diversity and experience.

The influence of the Federalist Society, an organization of conservatives and libertarians, on Trump judicial selections makes Democrats cringe. They’ve also decried Republicans for allowing circuit nominations to proceed without the support of both home state senators, in what they call a troubling departure from Senate tradition.

The change in “blue slip” protocol combined with a fortified Republican Senate majority and rules put in place by Democrats years ago limiting the ability of senators to filibuster, or hold up, nominees, have left the minority unable to derail Trump selections.

Moreover, new changes in how much debate time would be required for nominees could take shape soon to quicken the pace of district court confirmations, exacerbating the futility of Democrats.

In addition to Rao’s confirmation, Paul Matey was cleared for the Third Circuit on Tuesday. When Matey is seated, it will become the first circuit under Trump to flip to a majority of judges appointed by Republican presidents. Trump has put three members on that bench.

Others confirmed since the end of February include Eric Miller to the Ninth Circuit, Allison Jones Rushing to the Fourth and Chad Readler and Eric Murphy to the Sixth.

Trump has appointed about twice as many appeals court judges as Obama or George W. Bush at this point in their presidencies, Rorie Solberg, a professor at Oregon State University, said.

But only about a third of Trump’s circuit court picks have replaced judges appointed by Democratic presidents.

The effect of Trump appointments is “likely to be less dramatic” where he has replaced judges appointed by other Republicans, who “were also concerned about ideology,” Solberg said.

However, those Republicans “all had to contend with a more consistent application of the blue slip system and the filibuster,” limiting their ability to appoint more ideological judges, Solberg said.

Trump also has greatly benefited from obstruction of Obama’s nominees by Senate Republicans, resulting in a large number of holdover vacancies.

Trump has appointed judges to district, or trial courts at a much slower pace, but that could soon change.

The rate at which Trump is filling district court seats is basically matching Obama, though Trump has “many more vacancies to fill” than his predecessor, Solberg said.

It’s “astonishing” that there are still 80 district court vacancies that the Administrative Office of the U.S. Courts considers to be “judicial emergencies,” given that the Trump administration is working with a Republican-controlled Senate, Solberg said.

Republicans have prioritized filling appellate seats, but there are currently only 11 circuit court vacancies and one known future vacancy left to fill.

(Updates throughout with Rao confirmation.)