President Donald Trump speaks at the White House on Dec. 12, 2019, in Washington, DC.
Photo by BRENDAN SMIALOWSKI/AFP via Getty Images

President was impeached by the U.S. House on a single charge of incitement of insurrection for his role in a riot by his supporters that left five dead and the Capitol ransacked, putting an indelible stain on his legacy with only a week left in his term.

Wednesday’s historic 232-197 vote makes Trump the only U.S. president to be impeached twice, a little more than a year since his first. It was supported by all Democrats and 10 Republicans, including , the third-ranking GOP leader in the House.

“We know that the president of the United States incited this insurrection,” House Speaker said before the vote. She called Trump “a clear and present danger to this country that we all love.” 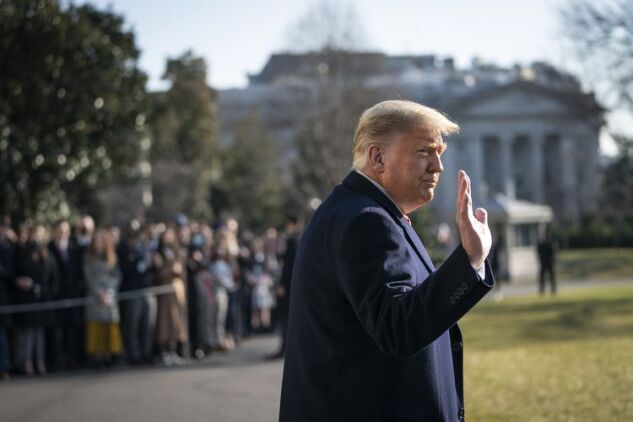 Pelosi will now determine how quickly to send the impeachment article to the Senate for a trial. Senate GOP leader has rejected Democratic leader ’s plea to agree to bring senators back for an emergency session and start the trial before Jan. 20 when Trump leaves office and President-elect is inaugurated.

The House speaker signed the impeachment article Wednesday night, but hasn’t indicated whether she’ll delay transmitting it to the Senate.

Trump, in a video released by the White House Wednesday evening, denounced the Capitol attack and called on Americans to avoid further violence. He did not mention the impeachment vote.

He has kept an iron grip on the Republican Party for most of his four years in office. But his stoking of the angry mob of supporters that stormed the Capitol on Jan. 6 was too much for some in the GOP. Even Republicans who didn’t vote for his impeachment denounced his actions.

McConnell has told associates that he believes that Trump committed an impeachable offense last week when he egged on the protesters, two people familiar with the matter said. In a note Wednesday to his Republican colleague, McConnell wrote, “I have not made a final decision on how I will vote and I intend to listen to the legal arguments when they are presented to the Senate.”

The repercussions were wide. Major companies began a torrent of announcements that they would at least temporarily cut off contributions to lawmakers who joined Trump in false claims of electoral fraud and the attempt to block results of the Nov. 3 election. Twitter, which has served as Trump’s megaphone to his followers, banned him, and he was kicked off other platforms. His business also took hits as the banks handling his finances and the American golf industry that brings business to his clubs pulled away.

Investors, however, shrugged off the proceedings in Washington on Wednesday, with the S&P 500 index seeing a modest 0.2% advance as of 3:31 p.m.

Trump has hinted at possibly running for president again in 2024, but his political future was uncertain. In addition to the political damage he’s sustained, Trump could be legally barred from holding federal office again if found guilty. He also faces potential criminal and civil legal jeopardy for encouraging supporters before the Jan. 6 riot. 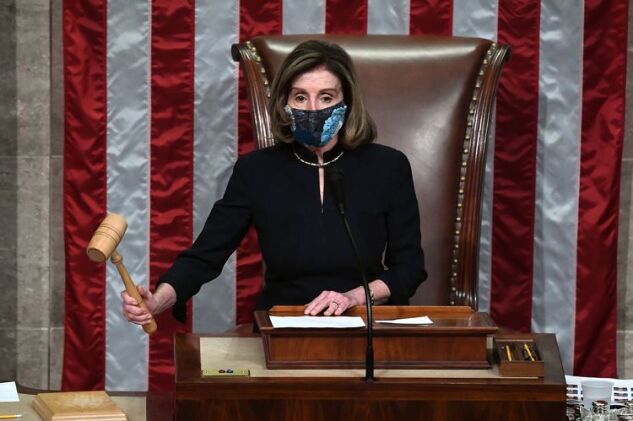 Nancy Pelosi puts down the gavel as she presides over the impeachment vote of President Trump on Jan. 13.
Photographer: Saul Loeb/AFP/Getty Images

A short time before the House vote, Trump tried again to quell the furor by releasing a statement saying, “There must be NO violence, NO lawbreaking and NO vandalism of any kind.”

“That is not what I stand for, and it is not what America stands for,” Trump said in the statement. “I call on ALL Americans to help ease tensions and calm tempers.”

House GOP leader , a staunch Trump ally, said impeaching the president in so short a time, with no investigation or hearings, would be a mistake.

“Here is what a vote to impeach would do. It would further divide this nation. A vote to impeach will further fan the flames of partisan division,” said McCarthy, who voted to challenge the electoral votes of two states won by Biden, just hours after the mob angered by Trump’s loss stormed the Capitol on Jan. 6.

McCarthy was among the 138 Republicans who heeded Trump’s false claims about the election and objected to the Electoral College vote count in at least one state.

Democrats said there was no question that Trump’s public remarks last week were a violation of the oath that all lawmakers take to uphold the Constitution.

“We told you last time if we didn’t impeach him, this would happen again. Simply put, we told you so,” Louisiana Democratic Representative said in his last remarks on the House floor before joining the Biden administration.

Some Democrats have expressed misgivings about impeachment leading to a Senate trial just as Biden was beginning his term, potentially overshadowing the transfer of power and stalling cabinet nominee confirmations and early legislative initiatives of the new Democratic administration.

As the lawmakers gathered in the House chamber Wednesday, the Capitol and surrounding areas in Washington resembled an armed camp. Thousands of National Guard troops and other security personnel stood watch and patrolled grounds and buildings. Police closed nearby streets with parked military vehicles, and tall metal fencing encircled much of the area. 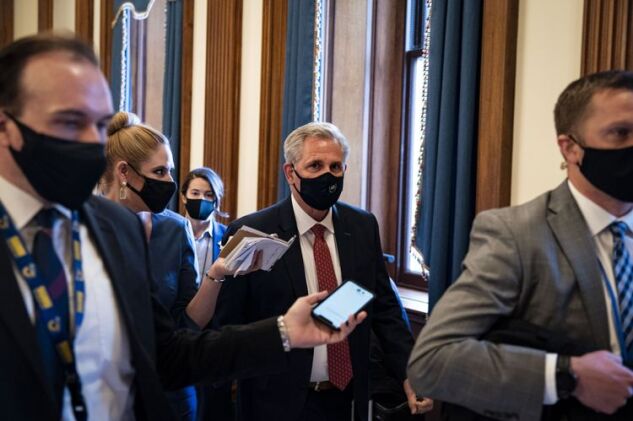 Kevin McCarthy walks to the floor of the House at the U.S. Capitol on Jan. 13.
Photographer: Al Drago/Bloomberg

The attack on the Capitol stunned and frightened many lawmakers, motivating Democrats to act fast. The impeachment proceeding went forward without hearings, taking witness testimony, or an investigation. That process played out for weeks in late 2019, as House Democrats impeached Trump on abuse of power and obstruction charges related to allegations he pressured Ukraine to investigate Biden and his son Hunter.

Democrats claimed there was clear public support for this second impeachment, arguing that much of America had been repulsed from what they witnessed playing out Jan. 6 on broadcast and other media.

Polls show that the public’s view of the president has declined as a result of the violence. A Quinnipiac University survey conducted after the storming of the Capitol found 56% of voters hold Trump responsible. In the same survey, Trump’s approval rating was 33%, a drop from the 44% rating he had in a December poll.

The events of Jan. 6 started with thousands of Trump supporters gathering in Washington as Congress was set to certify that Biden won the election. But as Trump and his congressional backers continued to dispute the election with false claims of electoral fraud, the president himself urged his supporters to march on the Capitol and register their opposition to the constitutional process.

The resulting attack was a scene of unprecedented rampage and trauma for the nation -- a U.S. Capitol police officer died after being beaten, one rioter died after being shot, and others were injured or died in medical emergencies. Offices were ransacked, and there were tense moment when even lawmakers inside the House chamber were under siege.

“In all of this, President Trump gravely endangered the security of the United States and its institutions of government,” the impeachment article states. “Donald John Trump engaged in high Crimes and Misdemeanors by inciting violence against the Government of the United States.”

The House voted after about three hours of debate Wednesday. The proceedings took place in the same chamber where presidents Andrew Johnson and Bill Clinton were impeached, as well as Trump for the first time in December 2019. None of them were convicted by the Senate.

(Updates with Pelosi signing the article in the fifth paragraph and additional quotes throughout.)