The House’s article of impeachment against former President will be delivered to the Senate on Monday, triggering the start of his unprecedented second trial in the chamber.

“We are respectful of the Senate’s constitutional power over the trial and always attentive to the fairness of the process, noting that the former president will have had the same amount of time to prepare for trial as our managers,” House Speaker said in a statement Friday. “Our managers are ready to begin to make their case to 100 Senate jurors through the trial process.” 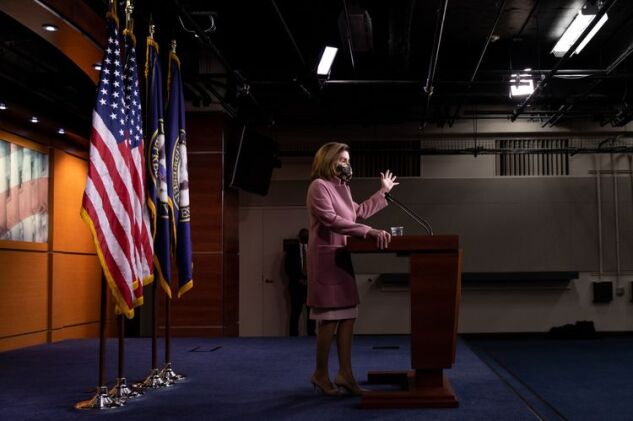 Neither Pelosi nor Senate Majority Leader addressed a proposal from Senate GOP leader to delay the start of a trial for three weeks. Schumer said the trial will be held and senators will have to decide whether they believe Trump “incited the insurrection against the United States.”

President on Friday said he’d like more time before the Senate is consumed by dealing with Trump. The Senate has so far only approved two of Biden’s cabinet members, Director of National Intelligence and Defense Secretary .

He told reporters that he hadn’t seen the details of McConnell’s proposal for a delay of the trial, but added, “The more time we have to get up and running and meet these crises, the better.”

The House impeached Trump for the second time on Jan. 13 on a single article charging him with inciting an insurrection for his role in stoking a mob of supporters who then stormed the U.S. Capitol, resulting in the deaths of five people and damaging the building.

Pelosi waited until after Biden was sworn in as president Wednesday, which was also the day Democrats assumed control of the Senate with the swearing-in of three new senators. The article can be transmitted without any further House floor action.

Transmittal of the article automatically triggers the trial’s start, though it may take a week before opening arguments begin. Schumer said the Senate must also continue work on confirming Biden’s cabinet and making progress on a pandemic relief package.

The decision on transmitting the impeachment article comes as Schumer and McConnell are still negotiating how to organize the 50-50 Senate and the chamber is moving ahead with confirming Biden’s nominees for key cabinet posts. The two leaders are at loggerheads over McConnell’s demand that Democrats guarantee there will be no attempt to do away with the filibuster, the tactic that allows the minority to block most legislation.

Missouri Senator , a member of GOP leadership, said that if the article comes over on Monday, the trial would start at 1 p.m. Tuesday unless there is agreement between Republicans and Democrats on other rules.

Splitting the Senate’s time between an impeachment trial and other matters, including votes on Biden’s nominees, likely would require cooperation from Republicans. Some Republicans have indicated they may oppose taking that course.

Senator , a Texas Republican, said Friday that without agreement, starting up the trial “displaces everything else.”

McConnell on Thursday proposed that Pelosi delay sending the article until Jan. 28 and allow Trump a week to respond, with his pre-trial brief due the following week on Feb. 11. Arguments by the prosecution and the defense would begin after that.

“This impeachment began with an unprecedentedly fast and minimal process over in the House,” McConnell said Friday. “The sequel cannot be an insufficient Senate process that denies former President Trump his due process or damages the Senate or the presidency itself.”

After Trump’s first House impeachment on abuse of power and obstruction of Congress, on December 18, 2019, Pelosi took until January 15, 2020 to send them over to the Senate to be considered at trial.

There will be significant differences from Trump’s first impeachment trial, which began on Jan. 16, 2020. That case was based on the pressure he put on Ukraine’s president to dig up dirt on Trump’s emerging political rival Biden, and it came after months of evidence-gathering, witness testimony, and transcripts from hearings.

Trump’s second impeachment case comes after no House hearings and no witness testimony. The argument that House impeachment managers -- the prosecutors in the case --expect to press at trial essentially is that the former president incited and supported the insurrection, and he did much of that in public view.

Lead House manager and Judiciary Chair last week announced that former impeachment counsel and Joshua Matz -- who had been involved in prosecution of Trump’s first trial --- were rehired to help with his second Senate trial.

Several Republicans have argued that it’s unconstitutional to try Trump, who is now a private citizen, but legal scholars and Democrats say the framers of the Constitution didn’t intend to give presidents free rein to violate their oath in the waning weeks of their terms.

McConnell has previously told GOP colleagues that he hadn’t decided whether he would vote to convict the former president and that it would be a vote of conscience for them. That is in contrast to his stance before Trump’s first impeachment trial when he said he was “not impartial about this at all” and predicted Trump would be acquitted, which he was.

McConnell’s final decision might sway some Republicans, but not necessarily enough to make the two-thirds majority necessary for conviction.

Cornyn said he doubted Trump would be convicted, and he faulted House Democrats for rushing through with impeachment.

”It’s kind of like the first time around. We kind of have an inkling of what the outcome is going to be,” Cornyn said. “It’s a serious issue, but it’s not a serious effort to comply with the requirements of due process and the Constitution when it comes to when it comes to impeachment.”