Trump speaks during a news conference in the Rose Garden.
Photographer: Sarah Silbiger/Bloomberg

Senate Republicans are racing ahead with post-election judicial confirmations, breaking a 123-year tradition against voting on judicial nominees of an outgoing president of the defeated party during a lame duck session.

Senate Majority Leader Mitch McConnell (R-Ky.) also wants to confirm Trump’s two remaining circuit picks whose nominations arose after Justice Amy Coney Barrett’s elevation to the Supreme Court from the U.S. Court of Appeals for the Seventh Circuit and the death of a First Circuit judge.

“I don’t see how you ratchet this back,” said Russell Wheeler, a visiting fellow at the Brookings Institution who studies judicial nominations.

Since 1897, the judicial nominees of presidents who have lost reelection or whose party was defeated haven’t been confirmed after the election, Wheeler said. Though there is one exception.

The Senate in 1980 confirmed Stephen Breyer to the First Circuit after Republican Ronald Reagan defeated Democrat Jimmy Carter. Breyer, who was chief counsel on the Senate Judiciary Committee, was confirmed easily, 14 years before he was appointed to the Supreme Court.

This time, McConnell is intent on filling vacancies before the current Congress ends, although the window is closing rapidly on the available time to push through judicial nominees with budget and other priorities looming.

“We’re going to run through the tape,” McConnell said to conservative radio host Hugh Hewitt after Barrett’s confirmation on Oct. 30. “We go through the end of the year, and so does the president.”

The next roll call votes are scheduled for Nov. 30.

When asked about the tradition of not confirming judges in a lame-duck session, a spokesperson for McConnell pointed to Senate norms that Democrats have abandoned in the judicial nominations process.

Judicial nominations have become more partisan over the past several decades, which has led to both parties nixing procedural customs. Democrats in 2013 eliminated the 60-vote threshold for lower court and executive nominees, and Republicans eliminated that same standard for Supreme Court nominees during the confirmation of Justice Neil Gorsuch in 2017.

McConnell has prioritized district court nominees from Red states throughout Trump’s term, including the lame-duck session so far.

The U.S. attorney for the Northern District of Indiana and former partner at Winston & Strawn LLP faced some resistance from Democrats over his conservative judicial philosophy and the lack of diversity he’d bring to the all-white Seventh Circuit. But those concerns are unlikely to prevent his confirmation. He was rated “Well Qualified” by the ABA.

During the hearing, Kirsch was also caught in the middle of an unusual debate among lawmakers over the application of conservative judicial philosophies, originalism, and textualism, to the landmark Supreme Court decision ending school segregation, Brown v. Board of Education.

Kirsch said he would apply the ordinary meaning at the time the text was written and said his responsibility is to apply Supreme Court precedent. He also later said he agreed Brown was correctly decided, as many nominees have done in recent months.

One was Jones Day attorney Kathryn Kimball Mizelle, who was rated “Not Qualified” by the ABA due to a lack of experience. The Senate confirmed Mizelle, 49-41, on Wednesday to the Middle District of Florida.

She is the 10th Trump nominee the independent group has given its lowest rating and is the eighth “Not Qualified” pick confirmed by the Senate during the Trump era. 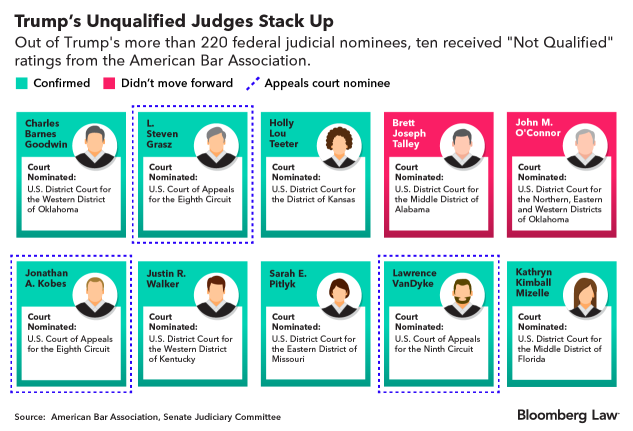 The ABA typically requires a minimum of 12 years experience to rate a nominee qualified. Mizelle was admitted to the Florida bar in September 2012, the ABA said, which “represents a rather marked departure from the 12 year minimum,” the ABA said in a September letter explaining its rating.

Stephen Vaden was confirmed to the U.S. Court of International Trade, also on Wednesday.

Time may run out before the Senate can fill the other federal appeals court vacancy. On Nov. 13, Trump announced Raúl Arias-Marxuach as his nominee for the First Circuit. Arias-Marxuach, a U.S. District Court judge in Puerto Rico, would replace Juan Torruella, who died Oct. 26.

There are a number of other trial court nominees awaiting action by the Judiciary Committee, but it’s unclear if the panel will take them up. Most are from California and New York, two Blue states.