Two of President Donald Trump’s appeals court selections didn’t make it out of the Senate before lawmakers adjourned for the year, and the re-nomination prospects in 2020 for one of them are unclear.

Andrew Brasher, tapped for the U.S. Court of Appeals for the Eleventh Circuit, is likely to be sent back to the Senate by the White House as early as January. But Halil Suleyman Ozerden, nominated to the Fifth Circuit, lacked support from key Republicans in 2019 and his future as a nominee remains clouded.

“I’m hopeful that the president early next year will nominate a strong constitutionalist with a proven record of fidelity to law and faithfulness to the Bill of Rights,” Sen. Ted Cruz, (R-Texas), told Bloomberg Law.

He’s one of two Republican Judiciary Committee members to oppose Ozerden’s nomination over their belief he didn’t measure up for one of the most conservative courts in the country covering Texas, Louisiana and Mississippi. The Mississippi-based seat is also considered a “judicial emergency,” which means that the court is stretched by its workload.

When asked whether Ozerden could be replaced as a circuit court nominee, Cruz said there are “ongoing discussions.” He wasn’t specific. 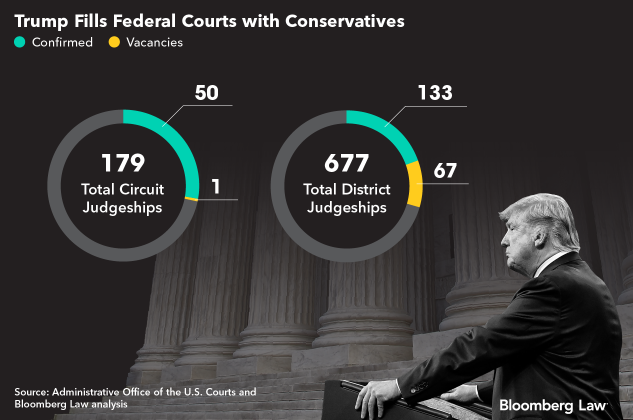 Ozerden’s nomination stalled this fall in the Judiciary Committee, which put off multiple votes to advance him to the full Senate while controversy swirled. Two Republican defections can sink a nominee in the current committee, if no Democrats cross-over in support.

Cruz and Missouri Sen. Josh Hawley, who said Ozerden could be renominated if the White House chooses to do it, focused on an Ozerden trial court decision in mounting their opposition to him.

Ozerden said his decision was bound by Fifth Circuit precedent and consistent with about two dozen similar cases across the country at the time. “If you look at my record on the whole, you’ll see I’m committed to the principles of textualism, following the law, and following the Constitution,” he said.

Sen. Cindy Hyde-Smith, one of two Mississippi Republicans, said she “continues to support” Ozerden, a spokesman said. The other, Sen. Rodger Wicker, didn’t respond to request for comment.

Sen. John Kennedy, a Louisiana Republican and a Judiciary Committee member, said he didn’t think the votes were there for Ozerden on the panel. “I don’t think it’s fair to the judge to leave him twisting in the wind, but that’s not my call,” he said.

A call to Ozerden’s chambers seeking comment was not returned.

It’s not unusual for judicial selections to lapse in the Senate and be re-nominated by the same or different administrations.

The inability to move Ozerden through the Judiciary Committee is a rare setback for Trump and the Republican-led Senate on judicial nominations, which has been a bright spot for the president’s domestic agenda and a likely selling point for his 2020 re-election campaign.

The White House has moved swiftly to make good on Trump’s 2016 camping promise to back the judiciary with conservatives. So far, he has appointed 183 judges to the appeals and district courts, and two more to the U.S. Supreme Court.

Trump and the Senate prioritized circuit courts early on. They sit one step below the Supreme Court and are the last word on virtually all appeals in federal courts. The president has appointed 50 appeals judges, or more than a quarter of all seats, in less than three years.

Ozerden was slated to fill the only remaining U.S. circuit court vacancy, while Brasher would replace a judge who will step down once a replacement is confirmed. There are 67 district court vacancies.

Carl Tobias, a law professor at the University of Richmond who tracks judicial nominations, said he has doubts Ozerden will be re-nominated, but hopes the White House gives him a choice.

“The professional thing to do is to leave it to the nominee, but this White House does whatever it wants,” Tobias said.

Only a few Trump judicial nominees have failed to be confirmed, and at least one of them withdrew his name from consideration amid political uncertainty.

Brasher, 38, had only been a district court judge in Alabama for several months when he was nominated to the Eleventh Circuit in November. He’d also be among the youngest circuit court judges if confirmed. Trump has pushed for younger nominees to federal courts to extend their influence.

Brasher received a unanimous “Well Qualified” rating from the ABA, which improves upon his “Qualified” rating in his previous go-around with the nominations process. He was confirmed to the district court, 52 to 47.

Ozerden also was rated “Well Qualified” by the ABA for the Fifth Circuit. He was confirmed unanimously to his district court seat in 2007, appointed by George W. Bush.