Hundreds protest a Trump administration announcement in 2017 that rescinds an Obama-era order allowing transgender students to use school bathrooms matching their gender identities, at the Stonewall Inn in New York City.
Photo by Spencer Platt/Getty Images

Conservative legislators and attorneys are challenging at the state and federal level the right of transgender athletes to participate in girls’ and women’s sports—an effort that will likely expand to several more states as legislatures return to session in the weeks and months ahead.

In March, Idaho became the first state to ban transgender athletes from competing in girls’ sports at the primary, secondary, and college levels. Boise State athlete Lindsey Hecox has sued Idaho to have the law in that state overturned.

More than a dozen other states have introduced similar legislation. States that have introduced transgender-exclusion bills this year include Alabama, Arizona, Georgia, Iowa, Indiana, Kansas, Tennessee, and Washington.

In Connecticut, four cisgender girls have filed lawsuits against school boards that have allowed transgender athletes to compete in girls’ sports. 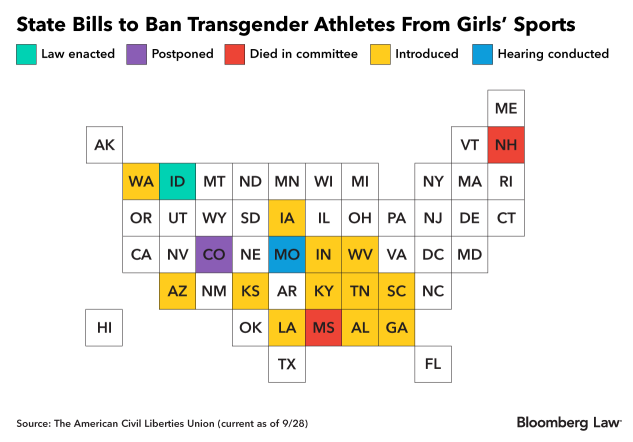 LGBT advocates have won a number of notable court victories in recent years, including at the U.S. Supreme Court. It held in June that LGBT employees are entitled to the workplace protections of Title VII of the Civil Rights Act of 1964.

The transgender athlete cases and some of the state bills have a common thread—the opponents of their participation are backed by the conservative group Alliance Defending Freedom, which is providing both legislative guidance and legal firepower.

The Phoenix-based ADF cites as its key issues “religious freedom, sanctity of life, and marriage and family.” The group has been involved in high-profile litigation involving gay and transgender rights, including a case in which a florist declined on religious grounds to serve a same-sex couple, and a case in which a cake shop refused to make a gender-transition cake.

Groups like ADF and the Heritage Foundation continue to fight to halt or reverse some of the gains LGBT advocates have made in recent years. The ACLU frequently opposes the ADF in court.

Many lawyers tracking this area of the law predict cases interpreting Title IX’s interaction with transgender rights also will end up before the nation’s top justices.

“The heated disputes about Title IX’s protection of trans athletes is one of the next big issues that will go up to the court for resolution,” Kyle Courtenay Velte, a professor at the University of Kansas Law School, told Bloomberg Law.

From Idaho to Connecticut

Rep. Barbara Ehardt (R), who sponsored the Idaho bill (H.B. 500), said ADF helped her draft the state’s transgender athlete ban and that the group has provided a model bill to lawmakers in other states.

Ehardt told Bloomberg Law that she had begun trying to write legislation but the state’s legislative services “couldn’t get the language correct.” So she reached out to what she described as “pro-family” groups, she said.

“Nobody had any legislation like this. No one had anything that would work,” Ehardt said. But eventually she found that ADF’s model legislation might do the trick, she said.

Ehardt said she views Idaho’s ban not as discriminating against transgender girls under Title IX but, instead, as upholding the rights of cisgender players under that same federal law.

She said she was a Division One athlete playing basketball at Idaho State University.

“I also spent 15 years coaching Division One women’s basketball at UC Santa Barbara, BYU, Washington State, and then as a head coach at Cal State Fullerton. So my background is that of athlete,” she said.

But the ACLU says in court filings that the Idaho law addresses a problem that doesn’t exist.

“Prior to the passage of H.B. 500, the existing rules in Idaho already required girls who are transgender to ‘complete one year of hormone treatment related to the gender transition before competing on a girls team,’” the ACLU told the District of Idaho.

“There were no reported issues with the administration of that rule or its effect on athletics in Idaho,” it said.

The law, in addition to discriminating based on athletes’ sex and transgender status, also opens the door to privacy violations, according to the group.

It forces the disclosure of sensitive medical information by requiring that athletes, upon a “dispute regarding” their sex, submit to invasive physical examinations and genetic testing in order to “verify” a vague and indeterminate notion of “biological sex,” the ACLU said.

The Idaho law is now on hold after the U.S. District Court for the District of Idaho granted a preliminary injunction in August, finding it’s likely to be declared unconstitutional—a ruling the state has appealed to the U.S. Court of Appeals for the Ninth Circuit.

The ACLU, meanwhile, represents both Hecox and the two transgender intervenors in the Connecticut case.

And as both sides wait to see what will happen with the Idaho appeal, the focus has most recently turned to the latter case, where both dismissal motions and other filings are pending. That includes an appeal by ADF attorneys to the Second Circuit over the judge’s refusal to recuse himself after admonishing the ADF attorneys for using male pronouns when referring to the transgender athletes.

Connecticut’s policy allowing transgender athletes to compete also sparked a threat by the Trump Administration to withhold federal funds that only just recently was resolved.

Education Secretary Betsy DeVos threatened to withhold grant money from magnet schools in Connecticut unless they agreed to pull out of the Interscholastic Athletic Conference for the same reasons cited by the ADF, that the transgender athlete policy violates the Title IX rights of cisgender students.

But the Education Department dropped its threat Sept. 22 after the recipients pledged they would continue to only use the funds for non-athletic purposes and agreed to abide by any Title IX court rulings.

Attorney Chase Strangio with the ACLU told Bloomberg Law that the athlete competition issue is part of a broader effort by conservative groups to target transgender rights.

“In the wake of marriage equality, there were escalating bills culminating in the 2016 North Carolina bathroom bill,” Strangio said, referring to H.B. 2.

That law was repealed in 2017 after a nationwide backlash, and was followed by a 2019 consent decree that assures that transgender people have the right in North Carolina to use the bathroom corresponding to their gender identity.

“After losing on the bathroom bills, they pivoted to sports,” he said.

“I anticipate more bills will pass when the legislatures reopen,” said Strangio. A majority of the states that have introduced bans are solidly Republican, with state legislatures unlikely to flip to the Democrats this fall.

Christiana Holcomb, ADF’s legal counsel, said a “growing chorus of voices—especially among female athletes” are “speaking out on the importance of preserving fairness in women’s sports.”

Holcomb also said that, "[a]s a leading authority on constitutional law, ADF is frequently asked by legislators and legislative bodies to provide legal analysis and insight on pending issues and legislation,” and that includes “protecting the integrity of women’s sports.”

The simultaneous activity in so many states means lawsuits opposing new state laws like Idaho’s, or transgender-friendly policies like those in Connecticut, are likely to move up to the Supreme Court, just as it is expected to take a more conservative turn.

Supreme Court nominee Amy Coney Barrett has been critical of the top court’s 2015 ruling in Obergefell v. Hodges, which held that states couldn’t deny same sex couples the right to marry, and suggested that the courts should leave to state legislatures the issue of transgender people’s access to bathrooms.

But for now, at least, the high court seems unlikely to make a U-turn on LGBT rights given the 6-3 majority in June’s workplace ruling in Bostock v. Clayton County, Kansas University’s Velte said.

The justices ruled in Bostock that Title VII of the Civil Rights Act of 1964, which bars sex discrimination in employment, protects employees against discrimination based on gender identity or sexual orientation.

When ruling on Title IX education discrimination cases, courts frequently turn to Title VII precedent to interpret and apply Title IX’s “on the basis of sex” clause, Velte said. Bostock should therefore have a direct impact on the education cases, she said.

“I feel fairly confident that the case will stand. Not only was it a 6-3 vote,” she said, but the court also adopted a “conservative” textual approach, said Velte. That’s a philosophy that Barrett, as a protege of the late Justice Antonin Scalia, said she embraces.

—With assistance from Paul Shukovsky.