Attorney General William Barr’s assertion that President Donald Trump didn’t obstruct justice is based in part on a legal rationale that’s “incorrect and misleading” and can lead to a state of affairs that “doesn’t really make any sense,” according to criminal law experts.

Trump seized on the one-two punch of Barr’s obstruction conclusion and Special Counsel Robert Mueller’s purported conclusion that his campaign didn’t conspire with Russians to say that he was completely exonerated.

The attorney general based his obstruction decision in part on his understanding of Mueller’s finding that Trump didn’t conspire or coordinate with Russian efforts to help him win the 2016 election by way of cyber-attacks on Democrats and other malign actions.

While the lack of an underlying crime is “not determinative” to the question of whether Trump obstructed justice, the absence of evidence from Mueller that Trump was involved in crimes related to Russian election interference “bears upon the President’s intent with respect to obstruction,” Barr reasoned in his letter, noting that such a crime requires a “corrupt intent.” 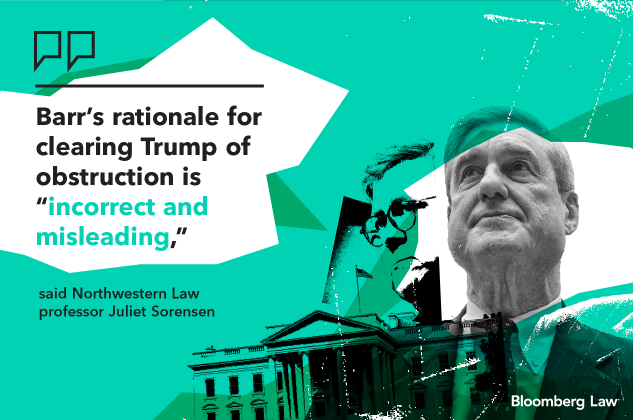 But to prove obstruction, there’s no need to prove that someone committed the crime that’s the subject of the investigation that’s being obstructed, as high profile prosecutions like the one against Martha Stewart stemming from alleged insider trading have illustrated.

Former President Bill Clinton was impeached over accusations he obstructed justice by covering-up evidence related to the civil case of Paula Jones, who sued him for sexual harassment. The point is that obstruction itself can be its own crime.

When it comes to Trump, then, to prove obstruction, he need not have conspired with Russians or actually committed any other crime that was being investigated.

Therefore, Barr’s reasoning could lead to strange results, according to a former federal prosecutor.

“If the absence of an underlying crime meant no obstruction, then it essentially rewards those who so ably obstruct as to prevent there from even being a prosecution,” said Patterson Belknap Webb & Tyler LLP partner Harry Sandick.

“If you commit obstruction at a very high level, very successfully, then you’re immune from prosecution for obstruction,” said Sandick, adding that that “doesn’t really make any sense.”

“It’s absolutely true that for someone to be guilty of obstruction, they need to possess corrupt intent,” Sorensen noted.

But it “doesn’t have to be grounded in the Russia investigation, and the clearest example of this is what the public knows as the strongest evidence of obstruction, which is Trump’s clearing the room in the oval office when James Comey is there, and then after doing so, saying to Comey, ‘Michael Flynn is a good guy, hope you can see your way clear to letting this thing go,’” Sorensen said.

The alleged February 2017 interaction between Trump and former FBI Director Comey would spark the special counsel probe itself, in which Flynn, Trump’s former national security adviser, would be convicted.

“It really doesn’t matter if [Trump] conspired or coordinated or not with the 2016 election when it comes to what appears to possibly be an effort to obstruct proceedings against Michael Flynn in the oval office when he has this deliberate encounter with James Comey,” she said.