A sign stating the Department of Homeland Security building and US Citizenship and Immigration Services field office in Tukwila, Wash., is closed because of an employee who might have been infected with the coronavirus, on March 3, 2020.
JASON REDMOND/AFP via Getty Images

Visa applicants facing agency processing delays are turning to the federal courts for relief that can save their employment and investments. The strategy is yielding, at best, mixed results.

U.S. State Department embassies and consulates abroad have seen their visa interview backlogs grow from 75,000 at the start of 2020 to 473,000 by February of this year, Consular Affairs Acting Deputy Assistant Secretary for Visa Services Julie M. Stufft said at a briefing this month.

The ballooning backlogs are a result of the Covid-19 pandemic and closures that were necessary to protect staff and the public, both in the U.S. and overseas, according to the agencies responsible for adjudicating applications and issuing documents. But for some applicants, like the spouses of H-1B specialty occupation visas and L-1 intracompany transferees, the challenges to retaining their status began even earlier.

“It’s hard to tell how much of this is ‘Trump hangover,’ meaning his administration’s efforts to slow down everything, and how much of it is from Covid,” said Jill Family, director of the Law and Government Institute at Widener University Commonwealth Law School. “What the Biden administration is facing right now is figuring out how to deal with all of those after-effects, and what’s really Covid-related, and how to fix that, and how much is just governance by letting the system burn.”

Though the consular services and the U.S. Citizenship and Immigration Services have different processing responsibilities, the concurrent backlogs at home and abroad paint a picture of a system in crisis that could take years to return to normal, attorneys say. 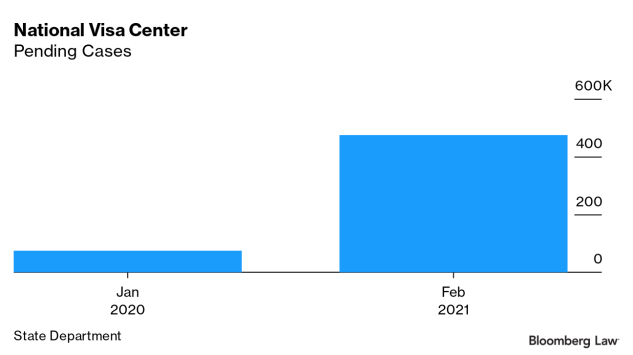 Two class actions have been filed against USCIS this year, alleging unnecessary delays for processing work permits for foreign students participating in work training and for applicants renewing their spousal H-4 and L-2 work authorizations. The potential class sizes in each amount to potentially tens of thousands of applicants, according to the attorneys behind them.

The most recent lawsuit over processing delays was filed March 22 and could represent a potential class of over 90,000 spousal visa holders waiting on work authorization.

“The damaging one, the most prevalent and inexplicable” delay is in the H-4 and L-2 visa categories, said Jonathan Wasden, an attorney with Wasden Banias LLC who represents those plaintiffs.

In this case, it’s the recent requirement that applicants submit biometrics before their applications can be adjudicated that has been the biggest wrench in the system, Wasden said. Those delays began, however, in 2019 before the pandemic hit.

Everything was working smoothly until the Trump administration changed the biometrics requirements in March 2019, and subsequently mandated that H-4 applications would have to be adjudicated separately from their H-1B spouses, adding to the inefficiency, he said. “It’s almost like they intentionally broke the system to harm the people they couldn’t harm with the law.”

Biometrics appointments were put on hold in 2020 when USCIS offices closed to the public, exacerbating existing delays.

“The result of that is people are losing their jobs,” said Eleanor Pelta, a partner at Morgan Lewis in D.C. who specializes in immigration and nationality law.

In many instances, “the employer is doing what they can, whether through unpaid leaves of absence,” she said, “and ultimately they’re being terminated because there’s no guarantee of when the employment authorization card is going to come through.”

The delays jeopardize future investment in the U.S. economy for EB-5 visa hopefuls waiting on the State Department to process their I-526 forms.

The program allows immigrants to qualify for a green card if they invest between $900,000 and $1.8 million in a U.S. commercial entity that creates at least 10 jobs for U.S. workers.

At its peak, the EB-5 program brought in nearly $11 billion and created more than 355,000 U.S. jobs in 2014 and 2015, according to a report based on USCIS data. The program has been particularly popular with investors from China, Vietnam, and India.

“These are people with approved 526’s, current priority dates, and the embassy in China won’t interview them,” Kuck said of his proposed lawsuit’s class. “Those 10,000 visas are gone.”

Stufft, the State Department official, said the agency was directing embassies to prioritize the processing of immigrant visas, “full stop, at every post.” She also said, during the March briefing, that the department was “seeking creative ways to increase the number of immigrant visa appointments that we can offer safely.”

USCIS declined to comment on the pending lawsuits regarding current backlogs or issues related to any litigation.

Courts have been wary to grant relief to individual plaintiffs who sue over the processing delays, reticent to declare a specific time period as an “undue delay.” And, the Biden administration hasn’t automatically reversed the government’s stance in litigation that predates his inauguration.

Wasden and Pelta said they’ve found, however, that named plaintiffs in lawsuits often see their applications quickly processed after filing in court.

“We find magically that when a mandamus is filed, a case is suddenly approved,” Pelta said. “But not everybody has that opportunity.”

Wasden concurred, saying that in his experience “the government has hurried up and processed the litigants in court to get rid of them.”

According to the Widener law professor, Jill Family, “the administrative law system itself either has inadequate or nonexistent internal quality control.”

“We can see the effects of that over and over again, that we constantly end up in these situations where non-citizens and their U.S. employers feel like the system is dysfunctional and they have nowhere to turn other than the federal courts,” she said. “And then they realize the federal courts aren’t a perfect solution either. I think that’s a theme in immigration law, even predating the Trump administration.”

Family theorized that even if legal action is a long shot, it may have the upside of bumping the processing delays higher on the Biden administration’s priority list.

Pelta agreed, optimistic that the issue will get some attention. “I know this administration has a lot to do on immigration, but I don’t think that it’s the desire of this administration to cause people to lose their jobs whom Congress, or the agencies intended to be employed in the United States. Otherwise they wouldn’t have created those laws and regulations.”

“It cannot be the goal of this administration to have that kind of economic wreckage going on,” she said.

Wasden was less optimistic. “If the Biden administration’s litigation positions are any indication, they don’t have plans to alleviate the situation,” he said. “They’re doubling down.”