The likelihood of a solid conservative majority on the U.S. Supreme Court for years to come, one perhaps poised even to overrule the landmark abortion-rights decision Roe v. Wade, has some worried Democrats considering changes to the court itself. Some urged President to pursue the idea of expanding, or “packing,” the court beyond its current nine seats, though Biden has indicated he doesn’t like that idea. Others would replace the life tenure of Supreme Court justices with fixed terms to guarantee each president has equal opportunity to shape its makeup. A commission appointed by Biden on these ideas, among others.

1. Why is this being debated?

Fights over Supreme Court vacancies, which happen rarely, have become among the ugliest spectacles of a highly partisan era. Liberal frustration in particular has risen since 2016, when the death of Justice , a conservative, gave Democratic President the opportunity to move the court to the left. But Senate Majority Leader , a Republican, refused to consider Obama’s nomination of , on the groundsthat a vacancy shouldn’t be filled during a presidential election year. So it was Republican Donald Trump, rather than Obama, who wound up filling the vacancy, with . Fast forward to 2020. A seat opened up just six weeks before Election Day with the deathof Ruth Bader Ginsburg, one of the court’s leading liberal voices. In that case, Republicans rushed to confirm Justice , bolstering the court’s conservative majority.

Two months into his presidency, Biden appointed a 36-member commission to study possible changes to the court, including the calls for term limits and more justices. Its co-chairs, former White House Counsel and former Deputy Assistant Attorney General , are both veterans of Obama’s administration, in which Biden served as vice president. The panel also includes Thomas Griffith, who was a conservative federal appeals court judge in Washington until he stepped down last year. Biden directed the commission to complete its report within 180 days of its first meeting, which took place in May.

3. Isn’t the court’s size and justices’ tenure set in stone?

The Constitution’s command that justices “hold their Offices during good Behaviour” has been interpreted to mean justices, like other federal judges, enjoy life tenure. That’s why many legal scholars, including some that support structural changes, say term limits would require passing an amendment to the Constitution, a difficult and rare feat. The number of seats, by contrast, has changed through the years. The Judiciary Act of 1789 created a six-member court. President John Adams tried but failedto shrink the court to five. For a time, the number of justices rose with the number of circuit courts, rising to a high of 10 in 1863. Congress reduced the number to seven in 1866, to deprive President Andrew Johnson of appointments, then raised the number in 1869 to nine, where it’s held ever since. 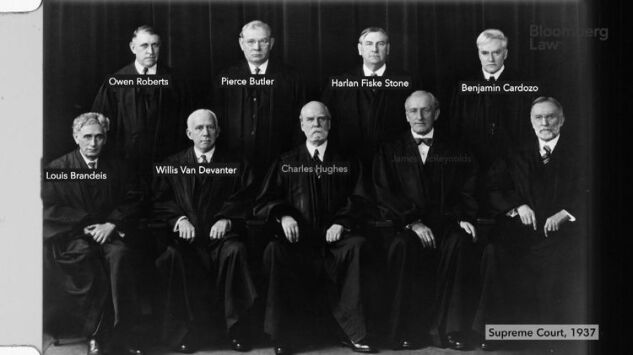 Bloomberg Law examines what the Framers envisioned for the Supreme Court and the long history of presidents and Congress attempting to shape the Court to fit their political needs.
(Source: Bloomberg)

4. When did ‘court packing’ become an issue?

In 1937, President Franklin D. Roosevelt, a Democrat, proposed expanding the size of the court due to resistance to his policies by a conservative majority. He faced opposition within his own party and additional seats weren’t added, but his efforts were credited with persuading one of the conservative justices to break ranks and vote in favor of a state minimum-wage law. That has gone down in history as the “switch in time that saved nine” -- meaning, the nine-member size of the court.

5. What would it take to expand the court?

Because the Constitution is silent on the court’s size, expanding it could be done through the regular legislative process by which all laws are made. But that means Democrats would need a supermajority of 60 votes in the Senate (where they control just 50 votes currently) or would have to do away with the , the unwritten Senate practice that requires 60 votes to pass major legislation. On the question of killing the filibuster, Democrats are .

6. How would term limits for justices work?

Term limit proposals have been around since at least the 1970s, but they’ve gotten new currency over the last five or 10 years due to people “becoming dissatisfied with the court,” said Suzanna Sherry, a law professor at Vanderbilt University who studies constitutional law. A draft report prepared for Biden’s commission says term limits “appear to enjoy the most widespread and bipartisan support” among proposals to reform the high court. There are a number of possible ways to structure term limits. The leading proposal would create staggered, 18-year terms, which would mean that every president would get to nominate two new justices each four-year term. Even if enacted, term limits would take decades to take full effect, since they wouldn’t apply to justices sitting at the time the change was implemented.

7. What would term limits accomplish?

Proponents argue that term limits would lessen the stakes of any given nomination, make the selection process more predictable by ensuring that each president gets approximately the same number of nominations during the course of a term, and ensure the selection process isn’t a product of happenstance caused by a justice’s death or retirement. “There’s a bit of randomness and unpredictability over who has control over the court,” Daniel Epps, a law professor at Washington University in St. Louis who researches constitutional law. “Term limits fixes that.” Term limits also could reduce the incentive a president might have to appoint younger justices, prevent justices serving into their older years, and make the court more democratic, said Epps, who co-authored a paper on how term limits might be designed.

8. What’s the case against term limits?

That they would undermine the independence of the justices, the bedrock of the American judicial system. The purpose of life appointment is to remove external and political pressures on the justices to ensure that they can focus on making the correct, though not necessarily the most popular, decision. Some scholars say constant changes could also lead new justices to overturn the court’s precedents on hot-button issues like abortion. Term limits “would lead to instability and unpredictability in the law,” said Sherry, who co-authored a paper exploring how having term limits for justices would have impacted the court’s Roe decision over the years. Biden himself hasn’t been keen on the idea of term limits in the past. “It’s a lifetime appointment. I’m not going to attempt to change that at all,” Biden said of term limits in 2020.

9. What would it take to impose term limits on justices?

At least some scholars see a possible way to get around the very high bar of trying to amend the Constitution. In this view, term limits could be implemented by traditional legislation so long as it gives justices the right to take “senior status” once their term is up, meaning they wouldn’t continue to hear high court cases, but could still hear cases on lower federal courts or assist the judiciary in other ways. That is a distinct minority view among legal experts who have weighed in on the issue, Epps said.

To contact the editors responsible for this story:
at sstern22@bloomberg.net