Abortion services largely shut down in Texas after a night of U.S. Supreme Court silence cleared a new law to take effect and outlaw most abortions after the sixth week of pregnancy.

The conservative-controlled court took no action Tuesday night on a bid by clinics and doctors to stop the law while a legal fight goes forward. That left clinics to start telling most patients on Wednesday that they were no longer eligible to get a legal abortion at a Texas facility.

“As of now, most abortion is banned in Texas,” said Marc Hearron, a lawyer with the Center for Reproductive Rights and the lead attorney challenging the new law. Challengers told the court that the measure would prohibit abortions for at least 85% of the women seeking one in the country’s second-most populous state. 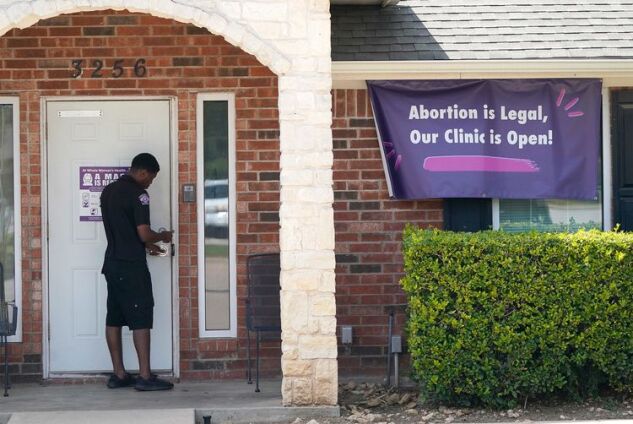 A security guard opens the door to the Whole Women’s Health Clinic in Fort Worth, Texas, on Sept. 1.
Photographer: LM Otero/AP Photo

The silence marked a highly unusual approach for a court that almost always acts one way or another on requests to block a law before it takes effect. The court could act on Wednesday but has no firm deadline.

The high court delay could stem from the thicket of procedural issues presented by the challenge. The law includes provisions that were designed to make legal attacks difficult.

Even so, the court’s inaction “speaks volumes,” said Mary Ziegler, a Florida State University College of Law professor who wrote a book on the history of abortion law. “The court looked at the prospect of abortion being functionally banned in Texas and saw no emergency at all.”

Many abortion-rights advocates say they fear the high court is poised to topple, or at least gut, precedents that now protect abortion rights until much later in pregnancy. In the coming months, the court will hear a Mississippi appeal that seeks to overturn the 1973 Roe v. Wade ruling, which legalized abortion nationwide.

The onset of the Texas law cheered abortion opponents eager to see the court roll back Roe and the 1992 Planned Parenthood v. Casey decision, which said a woman’s right is protected up until the fetus becomes viable, sometime after the 20th week of pregnancy. The court has become sharply more conservative in recent years with the confirmation of three appointees.

“It’s a new day in America,” said Kristan Hawkins, president of the anti-abortion group Students for Life Action. Roe “was judicial activism at its worst, as 62 million lives have been lost after a handful of judges found ‘abortion’ written in invisible ink in the Constitution.”

Other abortion critics cautioned against reading too much into the Supreme Court’s refusal to block the law right now.

“The plaintiffs have some procedural hurdles and evidentiary hurdles that they simply haven’t addressed,” said , a lawyer at Americans United for Life. “They’re asking the court just to issue a sweeping ruling and throw the entire law out, and they haven’t made their case, especially at this early stage.”

Representatives of Whole Woman’s Health and Planned Parenthood said their clinics in Texas remained open but were complying with the law by providing abortion services to only a limited class of patients. Amy Hagstrom Miller, president of Whole Woman’s Health, said her four clinics rushed to serve dozens of patients Tuesday night before the law kicked in, completing the last one at 11:56 p.m.

President in a statement Wednesday said the Texas law was “extreme” and “blatantly violates the constitutional right established under Roe v. Wade and upheld as precedent for nearly half a century.”

The law’s novel enforcement mechanism is at the center of the legal clash. The measure lets private parties sue a clinic or anyone who helps a woman get an abortion -- and collect a minimum of $10,000 in damages per procedure -- but doesn’t authorize government officials to sue alleged violators.

The defendants say the providers lack legal “standing” to sue at this stage because they can’t show an imminent injury stemming from the law. The government defendants also say they are protected from being sued by sovereign immunity.

In a court filing Tuesday, Texas Attorney General said the providers “have not shown that they will be personally harmed by a bill that may never be enforced against them by anyone.”